Lock Up The Doors, Time For Them To Depart

Our state institutions are dilapidated, our leaders a bunch of rogues. The time for tinkering is over, drastic measures are required. 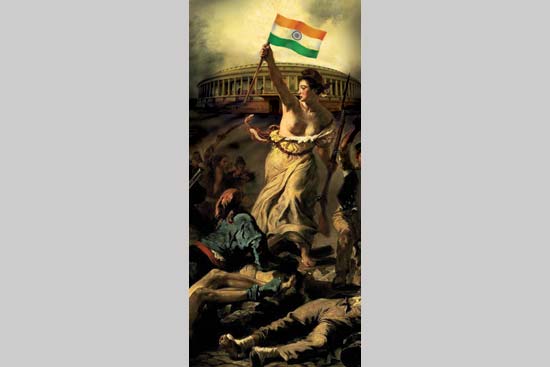 Illustration by Saahil
Markandey Katju August 17, 2015 00:00 IST Lock Up The Doors, Time For Them To Depart

I do not want to sound alarmist, but it looks to me that some kind of French Revolution is inevitable in India. Consider the facts: all our state institutions have become hollow and empty shells, and the Constitution seems to have exhausted itself. The last two weeks have shown that we have a Parliament that hardly functions—what with its members shouting and screaming all the time—and hardly any meaningful debate held or business transacted. When the UPA was in power, the BJP members were always disrupting the House, and now when the NDA is in the saddle, the Congress and others are paying it back in the same coin. It seems the same will be repeated in the winter session of Parliament, then in the budget session, and so on ad infinitum.

To add to this is the criminal antecedents of a large number of our MPs. We have politicians who are mostly incorrigible rascals who have no genuine love for India, are bent on looting the country, squirrelling away its wealth to secret foreign banks and havens, and manipulating caste and communal votebanks, often by inciting caste or religious riots. Our bureaucracy has largely become corrupt, and alas so has a section of the judiciary, which anyway takes an inordinate time to decide cases.

Our democracy has been hijacked by the feudals, and now elections in most places are on the basis of caste and religious votebanks, and no one bothers about the candidate’s merits.

There is massive poverty in India, massive unemployment, massive malnourishment etc. It is estimated that ten million youth enter the job market every year, but only half a million jobs are created in the organised sector of the economy. So what do the remaining youth do? They become hawkers, street vendors, stringers, bouncers, criminals, prostitutes or beggars.

Healthcare is almost non-existent for our masses. There are no doubt some very good hospitals and clinics in India, but most are exorbitantly expensive. So what does a poor man do when he or a family member falls ill? He goes to a quack.

Half of our children are malnourished. A UNICEF report says one out of three malnourished children in the world are Indian. Meanwhile, the prices of foodstuffs are skyrocketing. There are numerous farmer suicides in many parts of India, eg. Vidarbha, Gujarat, etc. There is covert and overt discrimination against minorities, Dalits and women. Honour killings, dowry deaths, female foeticide etc are a fact of life in many regions. Meanwhile, astrology and other more superstitious practices run rampant—even among many so-called ‘educated people’—and fake godmen and babas befool a gullible people.

In most Western countries there is very little air or water pollution. This is because there are very stringent rules against it, and violations entail heavy penalties. There you can safely drink the water from the taps in the house. It is as clean as mineral water. In India, on the other hand, almost everything is polluted. There are no doubt anti-pollution laws—for instance, the Environment Protection Act, Air Pollution Act, Water Pollution Act, Food Safety and Standards Act etc. But no one complies with these laws (the lead content found in Maggi noodles is but the tip of the iceberg).

Menwhile, our politicians, our “rahbars” are behaving like Neros fiddling while Rome is burning.

If you have an industry discharging toxic effluents into rivers, you find it easier to give a few thousand rupees every month to the pollution inspector who turns a blind eye to it than set up an effluent treatment plant which is capital-intensive. For our industrialists, this is cost-effective, the public be damned.

When I visited Varanasi a couple of years back, I was told by the late Veer Bhadra Mishra, the bade mahant of Sankat Mochan temple (who was a professor of engineering at BHU and whose son, also a professor of engineering, is now the mahant) that there are 30 canals discharging sewage into the Ganga, in the city. I was told by a friend in Allahabad (my hometown) that the Sangam area, where pilgrims coming from all over India bathe, is highly polluted.

Most cities in India are becoming hellish and practically unlivable. There is congestion and traffic jams regularly and building laws are openly flouted. Even in “posh” areas in Delhi like Defence Colony, South Extension, Greater Kailash etc, cars are parked all day on the roads—thus turning them into garages. The situation is the same in all our big cities like Bangalore, Chennai, Mumbai, Calcutta, Hyderabad and Lucknow, where living and travelling on the roads is like going through Dante’s purgatory. Soon it will become like the Inferno.

And our politicians, our “rahbars”, are behaving like Neros fiddling while Rome burns, or like the Bourbons before the French Revolution. I am reminded of what happened on April 20, 1653, when Oliver Cromwell entered the British Parliament with his soldiers and said to the members assembled there:

“It is high time for me to put an end to your sitting in this place, which you have dishonoured by your contempt of all virtue, and defiled by your practice of every vice.

“Ye are a factious crew, and enemies to all good government; ye are a pack of mercenary wretches, and would like Esau sell your country for a mess of pottage, and like Judas betray your god for a few pieces of money.

“Is there a single virtue now remaining amongst you? Is there one vice you do not possess? Ye have no more religion than my horse; gold is your god; which of you have not bartered your conscience for bribes? Is there a man amongst you that has the least care for the good of the Commonwealth? Ye sordid prostitutes, have you not defiled this sacred place, and turned the Lord’s temple into a den of thieves, by your immoral principles and wicked practices?

“Ye are grown intolerably odious to the whole nation; you were deputed here by the people to get grievances redress’d, are yourselves gone! So! Take away that shining bauble there, and lock up the doors. You have sat too long for any good you have been doing lately. Depart, I say; and let us have done with you. In the name of God, go!”

The soldiers then made the MPs get out of the Assembly hall, and locked it up. I wonder whether India’s Parliament is heading for the same fate. A drastic and total change in the system is now essential. Tinkering here and there will not do. The Constitution has exhausted itself. The whole system in India, including our state institutions, is like a building which is totally dilapidated. Renovation and repairs will achieve nothing. It calls for demolition and fresh construction. We have to create a new, just social order in which everyone, not just a handful, get a decent life.

But it is not possible to achieve this within the system. The solutions to our country’s problems lie outside the system. Which means we have to have some kind of French Revolution.