The MoD is going on an arms procurement spree, fearing possible fallouts from the Afghan crisis 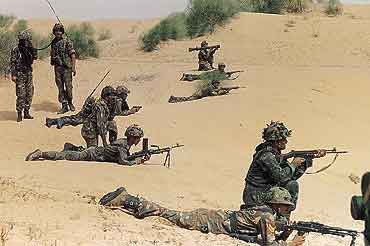 outlookindia.com
-0001-11-30T00:00:00+0553
With the Afghanistan crisis and enhanced threat perceptions, the ministry of defence (MoD) is taking no chances, deciding to go in for a huge emergency procurement of arms and new generation weapons. The "emergency" purchases are for a whopping Rs 8,500 crore for the three services together, with the tab for the army and paramilitary forces alone pegged at nearly Rs 6,000 crore.

Ever since the September 11 terrorist strikes in the US, there has been serious concern among security planners that the subcontinent's stability could come under threat. "Should the US-led war on terrorism go askew, there is a strong possibility of tensions building up between Pakistan and India," says a senior official in the MoD.

Military planners are also unsure of the political formations that could come to be in Pakistan, in the aftermath of Operation Enduring Freedom. "We have to be prepared for any contingency, and also keep in mind a possible conflict between the countries," said a security expert. The government has hence decided to go on the alert.

"The Kargil conflict in 1999 was a wake- up call. We had to go in for an arms acquisition spree in the middle of the war then," says an official in army headquarters.

Over the last two weeks, Arun Singh, advisor (security), has held a series of meetings with senior MoD officials and members of the newly reconstituted Defence Procurement Board, to assess the specific needs of the services. "The effort is to see how pressing the demands are. In a couple of weeks, we will be adding to the list," said an official.

The 'emergency' tag obviously means that competitive bidding for much of the weapons and equipment on the wish-list may be given a go-by. "In some cases, the MoD might have to rely on single vendor sourcing," said a defence ministry official.

Some of the critical equipment recommended include surveillance and target acquisition arms such as six helicopter-mounted surveillance sensors and 1,000 hand-held thermal imagers (hhti). Among the new generation weapons, it has been decided to acquire nearly 14 smerch multi-barrel rocket launchers (mbrls), which could cost over Rs 1,200 crore, 10,000 extended range rockets and Tunguska launchers and missiles.

The possibility of heightened terrorism in Kashmir has also been considered with an entire gamut of counter-ied (improvised explosive device) equipment on the list, including bomb disposal suits, ecm jammers, bomb suppression blankets, X-ray generators and fibre-optic surveillance devices. The tab here works out to Rs 500 crore.

Security strategists are also not discounting the threat of possible chemical/biological warfare. The MoD has on its list 350 chemical agent detectors and analysers and 100-odd chemical agent monitors. Arms for the paramilitary forces include special sniper rifles, laser target accquisition and designation systems, light weight assault rifles and night vision binoculars. Fresh arms additions in the list are 155 mm guns and mobile complexes on wheels. Considering the urgency, field trials may not be possible for smerch mbrls and the 155 mm wheeled guns. Both together are projected to cost nearly Rs 1,600 crore. It is still not known who will be supplying these consignments.

The cag report on the MoD's emergency procurements during Operation Vijay in Kargil clearly showed that "material deviations" were made in a large number of purchases, which totalled Rs 2,180 crore. The cag's main criticism was that procurements had gone through under "relaxed security norms and with no budget scrutiny".

This is a problem the MoD will have to contend with now also. "Even if we place the orders now, the entire consignment is not expected before August 2002," said a defence ministry official. However, the hhtis are expected to come by May next year, supplied by a French firm.

All this comes at a time when defence minister Jaswant Singh has already assured Parliament (in August) that greater transparency would be ushered in in arms purchases. In fact, he had even said that details of all defence procurements would be posted on the MoD website.

The problem now is, the procurement system is currently hostage to many inordinate delays, and to side-step this exceptions have to be made. Right now, say MoD officials, the need is to be on high alert. And strengthening the armoury is one priority area that cannot be ignored.

A Strategic Change Of Heart