Karnataka too uses the moral argument to ban dance bars 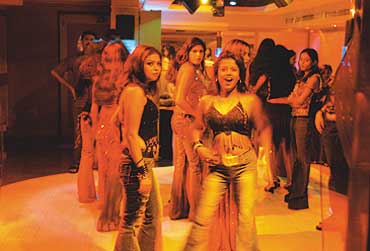 outlookindia.com
-0001-11-30T00:00:00+0553
Salam-e-ishq meri jaan, zara qubool kar lo..." goes a haunting Hindi number even as the dancer balances a glass on her head. This is followed by a raunchy Telugu sizzle: "Ah ante Alapura, Ee ante Elapura." Then a Kannada dancing tune. The girls gyrate, some just tap their feet, a few others stand resting against the pole. Bangalore's 'live bands', as dance bars here are known, are multilingual. The crowd that visits them is eclectic, from techies to traders. But surprisingly, the girls in the middle are mostly monolingual. Their 'thank yous,' when you throw money at them, are all in Hindi.

Live bands have proliferated here in the last one year and there are about 48 of them running now "but not exactly thriving", some owners contend. The upmarket ones are all around M.G. Road, Brigade Road and Residency Road. And the epicentre of the rest is the Majestic area. But wherever you go, it is just Hindi-speaking girls. "Ninety five per cent of our girls come from Mumbai, Chandigarh, Jalandhar, Calcutta, and there are a few khandani transfers from Jaipur and Agra. There are very few from the South," says a band master, the key person who "supplies" girls to these dance bars. "The South is conservative, plus the girls from the South, to keep their anonymity, move to the North," adds a band owner.

But, like Bombay, live bands may not last much longer in Bangalore either. "There is already pressure from the excise department to close shutters by 11.30 pm, they raid the premises after that," says an owner. "People work long hours here, especially techies, and they start trickling in only after 9 pm. By the time the Live Band warms up, there is pressure to close. It's absolutely frustrating. We earlier got court licences to run the band, but now we have to secure one from the police commissioner, which means more control in the hands of the government."

Like in Mumbai, the government is picking a moral argument in Karnataka as well against live bands. Deputy CM Siddaramaiah is believed to be "hellbent" on getting the bands banned. Ruling partner JD(S) had also made a commitment to the effect in its election manifesto. But the owners, expectedly, rubbish the argument. "Do they think we are promoting prostitution?" asks a band owner who was once a top journalist. "If we do so, we will only be losing our business. If we allow a man to pick up a girl for Rs 5,000, do you think he'll come and throw any money at the bar next day? The morality argument is bunkum. The government should realise that the IT boom and nightlife are two sides of a coin. It should be considered as part of infrastructure building. Live bands is just a good business idea for us. They are wonderful stress-busters and what you witness is only redistribution of wealth."

How much money gets thrown each day? Owners are initially hesitant to answer that one directly but by way of explanation say that 50 per cent of whatever is thrown goes to the girl; 20 per cent to the band master who houses, transports and provides security to these girls, and 30 per cent goes to the owners. But the extent of money earned can be gauged when the owners say they give hafta to everybody, from a beat constable to the inspector of a police station. The minimum hafta amount that goes to a police station could be about Rs 2 lakh a month. "On a good day, at a hep place, a girl may make Rs 10,000. On a bad day, she may just earn about Rs 500, after all the cuts," the owners reveal. As money keeps getting thrown at the bands, the girls walk up to little pigeon holes kept at a corner of the bar and drop their money.

To check the owners' claims that these are strictly dance bars, we put our mobile numbers on hand tissues and passed them on to the girls. It is past a week, there have been no calls so far.