Fisherfolk are still chary of going out to sea, and what coastline can be called 'normal' till that happens? 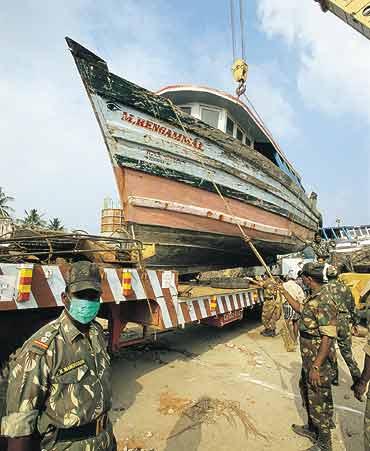 outlookindia.com
-0001-11-30T00:00:00+0553
In Nagapattinam, a week ahead of Pongal, the Tamil festival of harvest, most shops have reopened. For 10 days after the tsunami, shutters were downed more out of fear of looting by the tsunami-affected. Now, shopkeepers selling utensils and vessels are the most conspicuous, displaying rows of brass-plated pots stacked on their shopfront. In these new pots, freshly harvested rice, lentils, jaggery and milk will be cooked to make ‘sweet pongal’. The previous day, on Bhogi, the old order is symbolically burnt. Old mats, old clothes and unwanted possessions are set afire. With Pongal, a fresh beginning is made.

At 1/640, Main Road, Keechankuppam—once a prosperous fishing hamlet—Valli, Vijaykumar, Kokila and Neela have returned to perform a ceremony for the dead patriarch of the house. Valli’s husband Venkatachalam died 16 days ago. Nothing remains of the house: the roof has been blown away, the burnt walls are lined with soot. Son Vijaykumar says their houses had been burnt down post-tsunami. By who? "We don’t know. Some say gas cylinders caught fire when rescue workers decided to burn bodies they could not extricate from the debris. But others tell us that the houses were deliberately set afire."

Picking up the pieces and returning to the lives they once led looks impossible. The rush of food and clothes continues unabated. But logistics of sheltering the tsunami-affected is not easy. Many like Valli and her family were housed at a marriage hall. But with the marriage season coming on, they have been asked to leave. Schools where many were sheltered have to be reopened. The government-promised temporary shelters are yet to come up. Land has been identified and is being cleared, but again not all affected can expect to be settled there.

Points out John Kurien, fellow with the Centre for Development Studies, Thiruvananthapuram: "The rest of society may not be able to empathise for too long with the misfortune of the fisherfolk. The situation of having to open the schools and therefore wanting to send the fisherfolk hastily back to their business at sea is a good example of this conflict." Even as most fisher families struggle to find a decent place to stay, the government is keen to see the men return to their livelihood. In Samiyarpettai, on January 8, Cuddalore collector G. Gagandeepsingh Bedi himself accompanied the fishermen into the sea. That very evening, speaking to Outlook, R. Velu, who had gone with the collector, said: "We are not planning to venture into the sea again. The collector is a good man and he wanted to encourage us. But we are still afraid of the sea." For boats and nets to be ready, it will take at least another two months, says Mani, another Samiyarpettai fisherman.

In Thirumullaivasal, Nagapattinam district, we run into the TN minister for sports, R.T. Inbathtamilan, on a similar mission to push reluctant fishermen to return to the sea. Says V. Rathinavelu, a fisherman watching the spectacle from a distance, "The point is we don’t have the material to go daily into the sea." Fisherfolk are also being offered alternative work under the food-for-work programme. ‘Return to normalcy’—that much-used Doordarshan phrase—will take at least four months to happen.

In Andaman and Nicobar islands, the 38,000 tsunami-displaced are wondering about going home. While tonnes of relief has arrived, officials are busy assessing the damage before rehabilitation begins. Nearly 5,000 people have been evacuated from the islands to mainland India while most of the affected Nicobarese and the Great Andamanese have been evacuated to Port Blair. The other tribes such as the Onges and the Sentinelese are reported to be fine and word has now come in that the Shompen tribe, inhabitants of the Great Nicobar island, are also fine. However, on North Sentinel island, home to the Sentinelese, a new beach has emerged with the earlier coastline completely submerged.

Car Nicobar, one of the worst-affected, has managed to turn around and the local army brigade has begun reconstruction work. Brigadier J.M. Devadoss, overall in-charge of relief operations on the ground, has deployed an army engineer task force which has helped restore 80 per cent of the water supply and electricity. The task force has also begun construction of houses for the air force station which suffered extensive damage and for the locals who have chosen to remain in Car Nicobar. A major success of the relief measures has been the prevention of an epidemic in the islands and doctors were deployed in time at all the affected areas. Despite initial hiccups and poor management of resources by the civic administration, the relief operations have come good.

Once the tsunami-affected population is rehabilitated, both in the Andamans and Tamil Nadu, the government will have to turn its attention to healing the bruised environment. An assessment of the damage done is being undertaken by the environment ministry in conjunction with scientific organisations. Plans are already being drawn up to save existing mangroves along the coastline and restore coastal ecosystems that have been destroyed. Also, environment laws will be tightened to plug loopholes. More than anything, the tsunami has driven home the importance of environment impact studies before clearing any project. In the last two decades, this was often bypassed in the name of development. Now, this fit of rage should teach us all to treat her with a bit more respect.

By S. Anand in Cuddalore, Nagapattinam and Saikat Datta in Port Blair