The number of dysfunctional children is on the rise, no thanks to the world's rapidly transient value systems 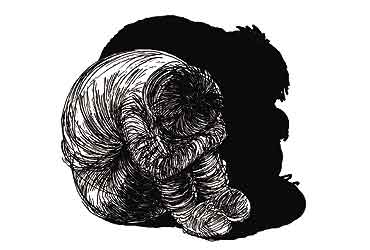 outlookindia.com
-0001-11-30T00:00:00+0553
Vidya has several thin, puckered, red lines criss-crossing her wrist. Pulling her sleeves over them, she smiles nervously: "A boy in class started ignoring me when I told him I loved him. That's when I first cut myself." She describes her self-harming acts as "pleasurably painful...the trick is not to cut too deep".

In her grey-green uniform, sitting forlorn in the school's medical room, Vidya, however, is no freak case. A seven-year-old boy in Mumbai draws a picture of his family and two eyes looking at them. Those eyes are his: his family never has the time to be with him.

At Bangalore's NIMHANS, one six-year-old being treated by child psychiatrist Shobha Srinath buries a doll in the sand and runs over it. A timid girl in real life, she is venting her anger on a sister who she thinks gets all her parents' attention.

Born into a confused new world of unabashed consumerism, transient value systems and elevated stress levels, India's next generation finds its 'wonder years' have slipped away to nowhere land. Growing up is usually a painful adjustment with realities. Expectedly, many fail to cope. Chased by an avalanche of school rejections, falling grades, psychosomatic aches, self-destructive behaviour, extreme anxiety and poor self-esteem, they cocoon themselves in their suffering souls.

So, there are kids coming to doctors and saying it'd be better if they were not there in this world. When asked to show with their hands how much mummy or daddy loved them, most of them have too little space between their little hands. And so they are being treated for diseases of a mind that's far from mature: depression, anxiety disorders, trauma, attention deficit hyperactivity disorder (adhd), dyslexia.... A survey carried out by Maharashtra's pta United Forum across Mumbai schools found that 26 out of 100 children between 8 and 10 showed signs of depression. At NIMHANS, 9-10 per cent of the children are diagnosed with depression.

When ngo Sarthak set up the 'Operation Hope' helpline in '97 and ran it for two months every year for five years, they got around 50,000 calls. "The numbers kept increasing every year," says director Achal Bhagat, psychiatrist with Apollo Hospital. "Almost 70 per cent of these were extremely demoralised or frustrated with regard to career issues and relationships, 15-20 per cent had minor disorders needing counselling, while the rest were clinically depressed, in need of both talk therapy and medication."

Says Nimesh Desai, professor of psychiatry at the Indian Institute of Human Behaviour and Allied Sciences (ihbas): "When aspiration levels are unrealistically high, a child ends up feeling helpless. This helplessness then results in depression." According to Samir Parikh, consultant psychiatrist with Max Hospital, most of his suicidal adolescent patients "are perfectionists or high achievers. He or she might have been humiliated recently by a perceived failure, like a diminished academic performance."

The problem with depression is psychiatrists see only 10 per cent in clinics, as opposed to the 26 per cent they would see if they went out to schools, like the Mumbai pta forum did. Says Dr Shamsah Sonawallah of Jaslok Hospital: "I think we're seeing a little more of the iceberg now but most of it still goes undetected."

Common warning signs aren't necessarily suicidal in nature. Ronak, an active 10-year-old, for example, started packing his things and threatened to run away from home. His school counsellor found that the "over-scheduling" of his life had left him feeling "like a rat on the run". Between homework, studying for weekly tests and home tutors for every subject, Ronak came close to breaking point.

Plugged into the information superhighway, mobile-toting, net-surfing, TV-addicted kids are overstimulated by images and messages."They go through a lifetime of experiences at a rapidfire rate, which leaves them feeling jaded and old," Bhagat says. Dr Jitendra Nagpal of vimhans relates how Ashwini, a 12-year-old girl studying in eighth standard told him, "What's the point in living? If I die tomorrow, what changes?" Every fifth patient he treats falls in the below-18 bracket. "Unfortunately, most parents only come to us when their grades suffer or school phobia sets in." They don't think a child who's become a bully is actually ill and a fractured home environment emerges. A six-year-old girl with falling grades said her mother had left her father because he was an alcoholic. "I told mamma I will take care of his drinking."

Delhi's Dr Rajat Mitra, who treats more than 55 "child trauma" cases a month, says 70 to 80 per cent of them become clinically depressed. What makes matters worse is that your child will prefer turning to music or computers than speak to you.

The link between child depression and ADHD or dyslexia cases is explained by Parikh. "Anything that affects the self-esteem of a child can trigger depression. Dyslexia affects performance and so does ADHD, which in turn result in family pressures and school problems."

While the causes vary, the symptoms are invariably the same (see box). "Many fall into self-destructive behaviour patterns, drug use, bullying, all dysfunctional ways of coping," explains Nagpal. Adds Bhagat: "Having one counsellor in a school with 3,000 or more students is woefully inadequate. We need to introduce a four-step programme in schools. First, we need to form peer-to-peer counselling teams among students. Second, train and deploy at least 25 per cent of the teachers as counsellors. Third, facilitate parents' interactions with their children and last, have linkages with third-party service providers who can dispense psychiatric treatment if need be. These measures will remarkably improve the child mental health situation in our country."

Parikh hosted the first free School Mental Health workshop at Max. It was attended by over 40 schools and over 60 counsellors. He plans such workshops every three months now. At a recent conference, vimhans invited education policymakers to discuss issues as diverse as violence in schools, obesity, urban stress and school mental health.

Such safeguards at school need to be supplemented by efforts to interact, intervene and guide at home. Mental health professionals say children do respond well to treatment. With young children, psychiatrists often try play therapy. With older ones, they try cognitive therapy. But almost always they include the family in therapy. While teenagers may not need parents physically and may actually push them away, Manju Nachani, principal of Mumbai's KC College, says emotionally they do seek parental approval and do need emotional support.

Along with counselling and therapy, kids are also getting prescribed anti-depressants. Pfizer recently conducted clinical trials for their blockbuster Zoloft on children in several countries including India. Pulin Shroff, JMD of Charak, which sells a herbal anti-depressant, says the 2,500-crore market for such drugs in India is rising at 20 per cent every year, with medication for children one of the fastest growing segments. Mental illnesses are, after all, only second to heart ailments. And it could be stalking your child tomorrow.