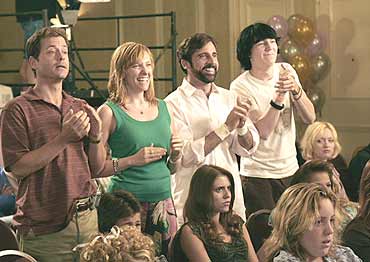 The best thing about American cinema is that besides the studio-assembled big ticket movies, there’s also the flourishing indie film movement which keeps throwing up some delightfully refreshing movies. Take Little Miss Sunshine; Jonathan Dayton and Valerie Faris’s debut vehicle picks on one of the abiding concerns of Hollywood—the family—and presents it with an unpredictably kooky touch. Here’s another family that believes in loving, sharing, supporting and protecting each other but definitely not in an obvious touchy-feely way. They are a set of oddball, dysfunctional people. Each of these characters is presented with tremendous warmth; you feel deeply for them. It only helps that all the actors come together to deliver a knockout ensemble performance. There’s the ever-smoking mom Sheryl (Colette), the heroin-snorting grandad (Alan Arkin), a motivational speaker father Richard (Kinnear) who is unable to get his own life in order, the suicidal Proust professor uncle Frank (Steve Carrell), a Nietzche-influenced teenaged son Dwayne (Paul Dano) who hates the world and has taken a vow of silence and, of course, Olive (Abigail Breslin), the little girl who dreams of winning the children’s beauty pageant. And so they pack themselves in a bus and head all the way from Albuquerque to California to make her take a shot at the title.

There’s some wonderfully eccentric bonding between the little girl and the grandad who teaches her the killer act for the contest. Much happens through this journey which transforms these relationships. The film begins with the father saying winning is all-important but ends with the assertion: "Do what you have to do; f*** the rest." This amazingly winsome portrayal of loony family values redefines feelgood cinema.