The RSS says no quarter. Advani says he's ready for battle. A Kurukshetra to the end for the BJP? Updates 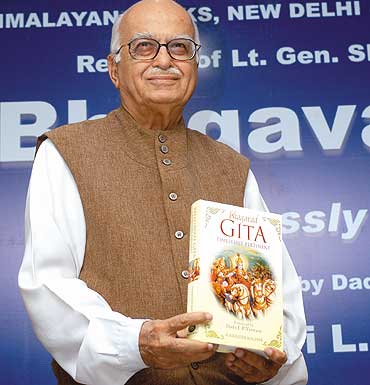 outlookindia.com
-0001-11-30T00:00:00+0553
The Rashtriya Swayamsevak Sangh has decided that Lal Krishna Advani must go as president of the BJP. Advani has decided he will not go because, "like Arjuna in the Mahabharata", he has no intention of leaving the battlefield. But if this is Kurukshetra for Advani, who are the Kauravas? In the old days when ideological matters were simple for the party, the enemy was "Mian Musharraf" and Jinnah's offspring ("Jinnah ki aulad"). Now that Advani is better understood in Pakistan than in his own party, will he as Arjuna also fight his own brothers in the larger ideological parivar? Are the Kauravas of Advani's imagination the younger leaders he has groomed in the BJP, or the old guard?

On June 15, at a function at his residence to release a book titled Bhagavad Gita, Timelessly Pertinent, Advani quoted from the scriptures to signal that he stood by all his statements in Pakistan, including those about Mohammed Ali Jinnah. "I have been passing through the same phase as Arjun," he said, and so instead of running away he had decided that "one must stand by one's convictions". But the problem with quoting from the scriptures is they can be thrown back at you too. As a senior BJP leader quipped, "If he is Arjuna, then is Sudheendra Kulkarni playing Krishna, persuading him to fight on? If so, then Advani appears to have forgotten that his sarathi (chariot driver) does not possess the Sudarshan chakra."

The Sangh's supreme leader, K.S. Sudarshan, has already taken one low swipe saying that politics is akin to prostitution, "where ideology is changed like a veshya changes her clothes". So now with Advani signalling he will fight for what he thinks is right, will others in the parivar too stand up for what they think is right? The VHP has been fulminating ever since Advani set foot on Pakistani soil. The big boys in Nagpur and Jhandewalan are also now in battle mode. A week ago, they had agreed to a compromise where Advani stayed on in return for the party speaking forcefully against Jinnah. Now saving Advani's face seems the least of their concerns. A war is certainly afoot.

As a senior Sangh functionary put it, "We feel that in the process of transforming himself into a great secular leader, Advani is undermining his whole party and parivar." More crucially, there is tremendous pressure from the cadre to give Advani the heave-ho. The situation is becoming untenable for the RSS. The thinking in the Sangh is Advani should "be persuaded" to quit, sooner rather than later. The divisions in the BJP can only become sharper if he stays since no one supports him on Jinnah. Currently busy with its organisational meetings, in early July the RSS will apply its mind to who should replace Advani. Ideally, the Sangh would like him to go before the monsoon session of Parliament begins on July 25. 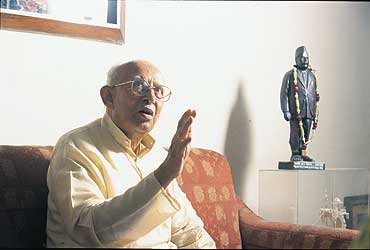 The RSS also believes that the BJP second rung has emerged with flying colours from the first round with Advani. "They all stood their ideological ground, did not budge on Jinnah and showed that they can work with each other," says a senior functionary. This is significant because the RSS future strategy will be influenced by the perception that the age of a "towering leader" like A.B. Vajpayee is drawing to an end. Whoever becomes president next will be a first-among-equals and will have to work with a collective leadership. Some of the RSS whole-timers in the BJP (who function as Nagpur's eyes and ears) have proposed that the party's constitution be amended to shorten the president's term so that all the second-rung hopefuls can get a shot at being president.

But these are still ideas being bandied around, not concrete proposals. And in this, the Sangh has also taken the current political scenario into consideration. With the Hindi heartland looking more and more a tough ask, the Sangh feels the BJP must focus on recovering ground in the over 70 Lok Sabha seats lost in urban India and on the gains made in tribal pockets. The new president should therefore be acceptable to urban and mofussil India.

It is all very well for the RSS to prepare a blueprint for the BJP's future, but Advani stands in the way. He would have had many backers in the party on the issue of the RSS dictating terms. But no one will back him on Jinnah. That is his stumbling block. It is not as if the second rung are opposed to the creation of a modern right-wing party which sheds some of its old baggage. And all the second-rung leaders know that if they seize the presidency only at the RSS' bidding, a price will be exacted. Everyone remembers the endless demands of the swayamsevaks, a constant irritant for many BJP leaders during the reign of the Vajpayee-led nda.

Leaders like Vajpayee, Jaswant Singh and Pramod Mahajan would have backed Advani to the hilt if it had simply been a case of the RSS trying to hijack the BJP. Says a BJP general secretary: "To give the impression that the RSS decides who will stay or go is suicidal for the party. It is neither in the interest of the BJP or RSS as institutions. The RSS, at times, also overestimates its influence. They forget we got nine crore votes. Most of it was the BJP's own vote. Yes, the RSS made a difference in tribal India. But the BJP is bigger than the RSS. The VHP and the RSS get publicity when they attack us. I ask you, how many RSS men can win an election?" 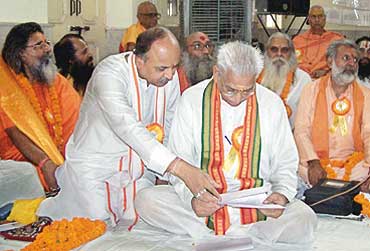 But the issue here is not the RSS. Quips a BJP MP: "By choosing Jinnah as his newest instrument of the divine, Advani has isolated himself in the party." Sources reveal that even Vajpayee does not endorse Advani's Jinnah formulation. The ex-PM has told visitors that Advani stoked an "unnecessary" controversy. "Woh mazaar par phool chada kar chale atey (he should have placed flowers on his mausoleum and come away)," he said. Though Vajpayee has no love lost for the RSS or VHP, he subtly distanced himself from Advani's Pakistan line by releasing a letter he had written to Prime Minister Manmohan Singh criticising the UPA's Pakistan policy. Always the superior pandit, Vajpayee (Bhishma pitamah?) had again deftly undermined Advani even while appearing to back him.

Advani, meanwhile, has become a lone rider who believes he's on a historic mission. A mission to become like Vajpayee, some say. But while Vajpayee continues to be highly flexible, Advani remains the rigid leader. And at 79, he is showing an obstinacy that has his entire parivar stunned. For the fundamental question BJP members are asking is: what constituency does Advani believe he is addressing by harping on Jinnah? Does he believe he will win over Muslims by praising Jinnah? Indeed, many Muslims are uncomfortable with any attempt to associate them with Jinnah when Jawaharlal Nehru and Maulana Azad are the real icons of the community.

Advani's little Mahabharata skit is all the more amazing as the BJP had already rejected his version of Jinnah in a carefully worded document released the day the lohpurush appeared to eat crow and withdraw his resignation. Indeed, anyone reading that document could be forgiven for thinking that Advani had gone to Pakistan to open a temple and promote the interests of Hindus in a theocratic state! The party had also strongly condemned Jinnah's politics, his vision of Pakistan and the nature of the state he founded. That was supposed to have been the BJP's final word on Jinnah.

But now Advani is quoting from the Gita to give a certain nobility of purpose to his Jinnah mission.The faithful are not amused. The remarks are ranging from the funny to the nasty.One sms quip: "The next shrine Advani should demolish is the Katasraj temple in Pakistan!" Or the popular "Jinnah wahan/ Marna yahan/RSS ke siva jaana kahan." At times, humour gives way to outright abuse: "Do you think Advani is a member of the ISI?"

It is not clear when Advani will go.He has shown no inclination to stick to the RSS deadline of July 25. Other dates being bandied about are after the Bihar polls in October or after the BJP's silver jubilee celebrations in December. No one in the BJP can ask him to go. But they can make his life miserable even as they pretend to support him. The BJP remains at sixes and sevens as a shaken Advani stares into an uncertain future. As Arjuna, he must know that the battle of Kurukshetra ended in a wasteland of death and destruction. Perhaps the Gita sermon is merely Advani's way of redeeming his self-respect.

'Not Just A Sale, It's A Relationship'