Lines From The Wrong Scrip

Playing politics has wiped off several thousand crores of PSU m-cap. But do those responsible care? More Coverage 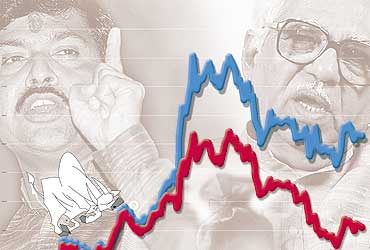 outlookindia.com
-0001-11-30T00:00:00+0553
You have heard of Bill Gates, probably America's best wealth creator, for Microsoft's shareholders during the '90s. Or of Kenneth Lay, one of the worst, he of the plummeting Enron stock on Wall Street and the crooked 'E'. But it's not just entrepreneurs who can create or destroy wealth on the stockmarkets. Even politicians can do that; in some cases, better or worse than the promoters themselves. Cut to 2002 and focus your minds on what's happened on Dalal Street.

Over the past few months, a few thousand crores of rupees have been knocked off PSU stocks. To be more exact, between June and October this year, the PSU Index (excluding those already privatised) has lost nearly Rs 15,000 crore in m-cap. Now everyone knows why that occurred. Blame it on posturings by politicians like Ram Naik, the petroleum minister, or telecom minister Pramod Mahajan. Or on the hurdles put up by them to the disinvestment fast track.

Both have opposed privatisation of oil and telecom PSUs for various reasons. Still, they don't feel their opposition has had any impact on stock movements. The anti-disinvestment camp points out that the Sensex itself lost some Rs 13,000 crore in the same five-month period. Worse, the Sensex shed three times more in market cap compared to its February high. What's more, a few private sector firms have lost more than their PSU counterparts. So, the downturn in PSU stocks was on expected lines.

While Naik and Mahajan didn't officially respond to Outlook's queries, the former had clarified his stance on the night of October 2, hours after the anti-disinvestment gang of three (including defence minister George Fernandes and HRD minister Murli Manohar Joshi) met to discuss future strategies. "Governments don't run on speculation. Speculators raise the (scrip) prices and now since their speculation is going wrong they are crying about valuations. The intrinsic values of oil PSUs is not getting changed. So, why the fuss?" Naik asked.

The fuss is because investor sentiments are getting hit. To really understand the implications of the privatisation imbroglio, we decided to compare the movements of the Sensex, the PSU Index and a new Disinvestment Index that encapsulated the stock prices of PSUs that were slated for disinvestment which has now been delayed, on an equated basis. For that purpose, the opening index values for all the three groups on January 1, 2002, were taken as 100 and their movements were plotted on a daily basis until October 22.

The comparisons were shockingly conclusive. The fall in the PSU Index and the Disinvestment Index were far steeper than the Sensex (see main chart). Obviously, the decline started in June, just when the decibel levels of criticism against privatisation began to grow. (It may be added that between January and June this year, the PSU and the Disinvestment Indices rose more sharply than the Sensex since investors were excited about the government's privatisation process.)

Another way to see if politicos have had any adverse impact on the markets was to compare price movements of PSU scrips with their private counterparts on an equated basis. Thus, a Nalco was plotted against a Hindalco by taking the latter's price on January 1 as the base, and BPCL against Reliance Industries. But here the comparisons didn't yield uniform results. Between January-October, the Hindalco scrip fell nearly 40 per cent. But Nalco, which rose over 150 per cent in January-July, dropped only 30 per cent in the subsequent period. But the fall in the Reliance scrip was less than that of BPCL.

The reasons for this contrast are simple to decipher. "Fundamentally, the Nalco scrip should hover around Rs 60-70. Currently, it is around Rs 90 due to a disinvestment premium. But if it's not privatised, prices should come down to more realistic levels," explains Suhas Naik, fund manager (equities), IL&FS.In the case of BPCL, the disinvestment premium has vanished since no one expects them to be hived off in a hurry. The same could happen to Nalco and other PSUs if their sale is delayed further. And, thanks to Naik, Fernandes and Mahajan, investors could end up losing a few more thousand of crores of rupees.