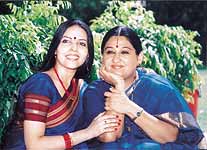 There’s more to her than championing B.K.S. Iyengar’s yoga. hrd minister Murli Manohar Joshi’s daughter Nivedita now gets together with renowned singer Shubha Mudgal to launch a music album for hmv Saregama. Kisson Ki Chadar finds Shubha giving voice to Nivedita’s poems under the baton of composer Shantanu Moitra with whom Shubha had collaborated earlier in Ab Ke Sawan and Mann Ke Manjeere. "They liked the sound quality of my words and Shantanu found it challenging to give music to my free verse," says Nivedita, who has been writing poetry for over a decade. Some years ago a painting exhibition based on her poems had been organised in the Capital. The album has six songs with an introduction by Nivedita herself. There’s also an underlying theme. "Kisson Ki Chadar is about the small incidents that make life complete. It’s about how life and poetry come together, grow apart and come together again," she says. However, it’s the music video of the title track that’s exciting her the most. Made by another Shubha favourite, Pradeep Sarkar, the video premieres on TV on June 28, the day of the release of the album. And it comes with a worthy cause—it’s a poignant look at the world of the elderly.