Dom meets Tom on the highway of history and, with co-traveller Sarayu, spins a true yarn 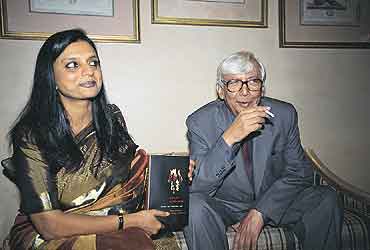 The Long Strider—How Thomas Coryate Walked From England To India In The Year 1613
By Dom Moraes By Sarayu Srivatsa
Penguin Rs 425; Pages: 376
Thomas Coryate could easily have been the invention of an over-imaginative novelist. After all, who would believe in an English dwarf, with a deformed head and a triangular beard, who claimed to have introduced the fork to the British dining table, and who then walked to India for an audience with the Great Moghul? But Coryate was flesh and blood. The son of a Somerset parson, whose corpse he hid in a cave for no apparent reason, Coryate became a favourite at the court of the heir to the British throne, where he is described as playing the learned fool, the butt of other courtiers’ jokes. He was determinedly eccentric. In 1608, he spent five months on a 1,975-mile walk around Europe. En route, a series of disasters befell him. He went to sleep on a bed of hay, and was woken by a horse urinating on him; he fled the Jews of Venice in the belief that they intended to circumcise him. His travellers’ tales, written up as the Crudities, made his name in Britain. He then left England forever, and made his slow and accident-prone way to India where he met the Emperor Jehangir, and later died, a bedraggled and impoverished 40-year-old, near Surat.

Dom Moraes and Sarayu Srivatsa have written a book that is, at times, as eccentric and startling as the life story of Tom Coryate. The Long Strider is a lively, many-layered tale that turns out to be nearly as much about Dom as it is about its ostensible hero. The two authors, in antakshari mode, take it in turns to write chapters. Dom, writing as a novelist, recreates Coryate’s final years. Sarayu, writing as a diarist, records their modern-day search in England and India for traces of the world Coryate left behind. This is an ambitious exercise, and on the whole they pull it off.

Fans of Dom’s earlier writings (particularly his painful and exquisitely-written memoir My Son’s Father) will find echoes both of his early stylish prose and, always true to his youthful obsessions, of his enduring interest in the size and tactility of women’s breasts. The first 60 pages amble gently through 17th and 21st century England—as Coryate loses his virginity and leaves his homeland, and Dom and Sarayu discover how hard it can be to get a square meal and good drink in the English countryside.

Then, suddenly, like a smack in the face, the entire atmosphere of the book changes. We learn something that Dom hints at in his introduction. He discovers he is dying of cancer. A mosquito bite on his neck turns out to be tumour. Suddenly, writing the book becomes a race against time. Dom’s plans to travel, like Coryate, through Afghanistan and Pakistan, are jettisoned; most of the rest of the book is set in northern India. An ailing Dom is shepherded around the country—and is succoured with large quantities of whisky. Sarayu records his reaction to learning of his tumour, "What I need to do immediately is get as pissed as is humanly possible." A hyperactive Bohra Muslim Osama-lookalike called Juzer becomes their researcher and companion, and somehow keeps the show on the road, encouraging the authors to find traces of Coryate where none seem to exist.

In fact, very little is known about Coryate’s time in India. He wrote several volumes of notes—but nothing except five letters home, to his mother, survive; he is also mentioned in accounts written by other Englishmen living in India. So the main task of the authors becomes, as they put it, to reconstruct, or reinvent, Coryate’s last years. This allows Dom to imagine a series of unlikely encounters between Coryate and a wide variety of large-breasted women, as also an extended stay in Agra with a couple of gay Portuguese Jesuits. In Kashi, Coryate even has a brief midnight chat with an Aghori, a corpse-eater, who is holding the charred half-chewed calf and foot of a human being. Dom, who does not hide his general distaste for all religion, shows sympathy for the Aghori, whom he imagines declaring to Coryate that "India has many faiths" and that he "harms no living being".

We do know the real Coryate delivered an oration to Jehangir in Ajmer, and received 100 rupees for his pains. He was then thrown out of the British camp at Ajmer for having dishonoured his nation by presenting himself in a "beggarly and poor fashion" before the Emperor. Moraes portrays Coryate in his last year as a very ill man, still driven by his original plan to go to China, but who eventually accepts the inevitable and agrees to be shipped home by the East India Company. But he dies, after a last boozing session, "the beard wet with blood and vomit", in Gujarat. As he feared, his final writings did not survive him. Dom, still boozing and ogling after all these years, need have no such fears.