They are seven going on 18...leapfrogging from crayons to perfumes and tattoos. What gives? 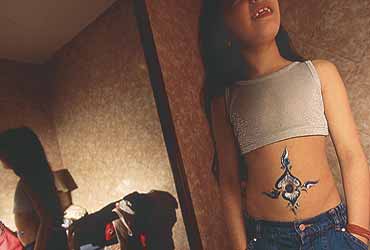 outlookindia.com
-0001-11-30T00:00:00+0553
Maiytre Dalvi is extremely particular that you spell her name right. But that's not where this Delhi-based girl's exactitude begins—or ends. She's a stunner on an evening out. And she knows it. After all, she has yet again brilliantly orchestrated the stop-stare effect. Immaculately done nails and hair to make-up that pays obeisance to her deft hands, a parlour-acquired scintillating tattoo of a fire-spitting dragon devouring her belly button, a wardrobe that could at once give several actresses an overnight makeover. And she is only seven.

A student at Delhi's Sanskriti school, Maiytrè spearheads a growing sorority who are redefining notions of "cuteness" as we once knew it. Thanks to a pandemic of soft-hearted parents who pamper their children in nuclear families, glam television that throws up a hot, young and pretty celeb every other day, and rising consumerism which now targets the young and the innocent, more and more urban Indian kids are fast-forwarding into unready 'maturity'. Clothes and looks are the first casualty then: they want to be togged out in costumes of their favourite pop or Bollywood star, and talk their talk.

Like the way Maiytrè and her friends have joined hands to pronounce the death of the frock by lethal rejection. Deemed equally culpable and cringe-worthy, its many accessories—frills, laces, ribbons, bows, socks with trimmings, and squeaky, buckled shoes—have all been guillotined too at the altar of Britney Spears' navel. Not that Kareena Kapoor's midriff hasn't inspired a less macabre massacre.

More and more baffled, though secretly proud and amused, mums are wondering what to make of their little girls' winged transition from crayons to perfume. Maiytrè's single parent mum Madhurika Dalvi's recollections of buying clothes for her belong to a remote and sequestered past. Says Dalvi: "She's been choosing her wardrobe since the age of three. Now she coordinates everything—from her accessories to the nailpaint—besides giving me constant style checks."

And the choices only get more complex as they grow just a little 'older'. Eleven-year-old Medhavani Rai of Delhi wanted knee-high leather boots for Christmas but settled for a make-up kit. Mum Neelakshi Rai doesn't have a problem with her trying so hard to look older but sometimes is irked by her daughter trying to force it. "I want her to have her own sense of style, but sometimes she wears weird stuff just because it's cool to be seen in it, and it doesn't suit her."

Maiytrè's friend, Aleah Ahmad, 7, balks too at looking her age. Pants are her favourite item of clothing, as much as she loves 'item' numbers. And former Miss India-turned-jewellery designer mum Naina Balsaver has outfits made for her which seem like miniature Manish Malhotra creations. "If something I'm wearing catches her eye, she asks, 'Can I have that in my size,'" Balsaver reveals. Apparently, Aleah's performance repertoire ranges from striking a pose like FTV supermodels to pirouetting like her favourite actress Karisma Kapoor. "These girls are 7 going on 18," exclaims the mock-exasperated mum. And while she's discovering the rigours of new-age parenting, she looks back at her experience of raising her two older kids—almost a decade earlier: "It was more paced out. And they weren't so incredibly style-conscious."

Look around. They're all over. In the beginning, you just found the odd little Kareena clone running around at a wedding or a birthday party. Initially frowned upon as a precocious aberration, she's now a trendsetter. For her birthday, Gurgaon-based five-year-old Sanya Shukla's asked for Bebo's hot-red outfit from the You are my Soniya number from Kabhie Khushi Kabhie Gham. The parents settled on the pants and gave the skimpy top a miss.

With little angels shedding their wings and spouting horns, boys are breaking new ground in daredevilry. So parents find them moving on from general hell-raising to more focused hair-raising issues. Take Shaurya Shekhar, 12, and younger bro Shashwat, 10, of Delhi Public School, for instance. "They've been trying to convince me to let them colour their hair red just like a boy in school has," says mother Sushmita Shekhar, senior VP, Sulabh International.

Clearly, just gelling their hair doesn't gel with the boys anymore. As Delhi-based 11-year-old Ritwik Rudro's mum has learnt. She feels her son's heading for disaster: "It's this awful Beckham-style, he can't carry it off," she moans, at which he grimaces, saying: "It's inspired by Ronaldo, mum." At the moment, it's a deadlock. "It's too much, too fast, too early. And he's not even hit his teens," she says with a shudder. Her wise aphorism, "Following fashion is like chasing a mirage", is met with more squirming followed by renewed lobbying for a cellphone.

Perhaps these boys would like to get some lessons in perseverance from Mumbai-based Yash Shroff, 10, of Christ Church School. "If I want something, and they say 'No', I ask again and again till I've worn them down," he says of his way of bonding with his parents. When Yash steps out to meet friends, he meticulously constructs his look for the day, choosing clothes, matching watch and shoes carefully, besides spiking his hair. For last Christmas, he got his mother, Gloria, to get him a leather suit-jacket and trousers. Travelling abroad often, she shops a lot for him there. "I like him to be trendy but not overstep the line," she says. But it seems Yash doesn't have to toe that line. WWF T-shirts, goalkeeper's gear, spiked football shoes have all been bought for her football-crazed son. He also has 15 watches. Into sports, computers and movies, Yash says that he wants a bike a little later but he would like a cellphone now, the one with a camera.

There are many others bitten by the Boogie Woogie bug, Sony's popular kiddie dance show. Like Parth Syal, 12, of Delhi's St Xavier's school, chasing Bombay dreams. "I want to participate in Mr India and Mr Universe contests," he declares. For mum Anju Syal, her son's a natural-born killer. "He's been an excellent dancer since the age of three. He wants to be an entertainer."

But down south in Bangalore, 10-year-old Harry Clinton's parents are hoping their son would snap out of his celluloid trance. Studying at St German's School, he wants his wardrobe packed with outfits similar to idols Hrithik Roshan and Tamil movie actor Vijay. He's forced his parents to get him one that came along with a maroon blazer, a la Roshan in Kaho Na Pyar Hai. "This attire cost us Rs 1,800 and in less than three months, he'd lost it," laments his mother, Jessintha. Says his father, Dharnidaran, a civil engineer: "He wants new clothes every month."

While every generation has patented ways to leave parents' eyes and mouths wide open, this one is shrewd enough to leave them with no reaction time. But it's not as if a day in the life of these kids begins and ends with romancing the mirror. They are superquick on the uptake in everything—not just the nuances of fashion. For instance, Maiytrè has turned down several modelling assignments. "Not my scene," she quips. She loves maths, horse-riding and painting. She doesn't want to be a prima donna but the prime minister. Parth Syal's the best swimmer in his school. Ritwik Rudro astounds his parents with his gizmo-gadget wizardry. Shaurya Shekhar plays the tabla beautifully.

But by exhibiting similar characteristics as their older, much-maligned, angst-ridden teenage counterparts, these pre-teens, or "tweens," as they're called, are blurring expected behavioural lines.Santosh Desai, president, McCann-Ericcson, prophesies that in the coming years we will have products more specifically created for this age group. "The gap will close or companies will lose out."

Companies are already pushing the limits with products in new segments like cosmetics. Like the latest Pears soap ad of a four-year-old girl with a dry skin problem. Mummy resolves her existential dilemma by handing her the soap to ease the pain of discovery that her biological clock is ticking. The market for preening tweens is kicking off in India: there are hair parlours for kids doing good business. "We get five-year-old kids getting mushroom cuts, and six-year-olds preferring spiked hair. Small girls ask for cuts out of their favourite soaps and Bollywood heroines," says Delzeen Wadia, hair stylist at WaterMelon, the Mumbai parlour.

Desai feels children will look and behave like adults."The idea of children playing out grown-up fantasies is timeless. The difference is that today they are equipped in a real sense with many devices to play out the fantasy. But with an adult exterior, they may not get the attention and affection needed for growth." Going by the gasps she elicits, and thoroughly enjoying her head-turning power, Maiytrè Dalvi, of course, would disagree. Even as her mum assures you that it's not going to her head.