The Congress-NCP was always a wicker in hot wax; the Sawant report on NCP corruption has come as a spark 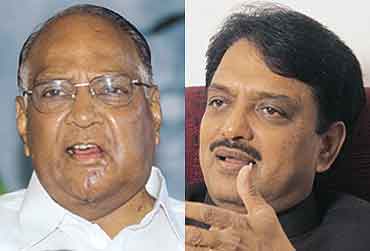 outlookindia.com
-0001-11-30T00:00:00+0553
The Congress-NCP tie-up in Maharashtra was always a marriage of convenience. At best a tough relationship, now it is an uneasy one. Chief minister Vilasrao Deshmukh and his deputy, NCP's R.R. Patil, can't see eye to eye on a slew of issues. NCP chief Sharad Pawar's unhappiness at the way Sonia Gandhi treats allies in Delhi and NCP's reply to that in Maharashtra are taking the two parties to the edge. Add to it the Sawant Commission report that indicted three ministers—all from the NCP—for corruption. What's worse is the speed with which the CM tabled the report in the assembly, forcing the NCP to advise two of its ministers in the cabinet to quit.

Manifestations of the ill-will between Congress and NCP are unmistakable. PM Manmohan Singh's visit to Pune last week left the Congressmen highly agitated. Reason: his itinerary ignored the Congress. It included a visit to the Chitale confectionery plant, attending the 75th anniversary celebration of Cosmos Bank, gracing a local college's function and another at the office of Marathi newspaper Sakal, followed by dinner with select guests. The party was nowhere on the list. Says an angry Congressman, "The first two groups are Sangh supporters and the rest were organised by Sharad Pawar. After we protested, the pmo included a 10-minute stop at Congress House. At this rate, we will be rolling out the red carpet for the NCP only."

The unease between the two parties seen in Pune is common. All along the Konkan coast, local leaders are literally at war with each other. The alacrity with which Deshmukh tabled the Sawant report is seen by most NCP leaders as a move to embarrass their party. They point out that governments are known to drag their feet on a commission of inquiry report but Sawant's report was accepted, tabled and a task force set up to suggest action in one week alone. At a press conference, the Congress "reminded the people that Congress ministers caught in such situations had willingly resigned"—a tactic to pressurise the NCP to follow suit.

With the opposition Shiv Sena-BJP calling for the ministers' arrest, the NCP was left with no option but to advise Suresh Jain and Nawab Malik to resign. Dr Padamsinh Patil, a Pawar confidant, was not in the cabinet this time. The fourth, Vijay Kumar Gavit, was found guilty of maladministration, not corruption, so he keeps his ministerial berth. "We may have backed the ministers more but the Democratic Front coalition wouldn't. The truth is we are in a coalition led by the Congress," said an NCP leader. The senior leadership is nursing its wounds of how, despite its higher numbers, they had to give in to Sonia's insistence on having her own CM.

What rankles in Delhi and Mumbai goes all the way down. The Congress abstained from the vote during the recent zila parishad president polls in Alibaug. The result: the NCP candidate lost to the Sena-led alliance. In the civic elections to be held on April 10, among them in the Sena-dominated Aurangabad and Navi Mumbai, separate candidates are being fielded. The outcome is likely to favour the Sena-BJP.

It only gets tougher for Deshmukh. Once he was perceived as eating humble pie over the slum demolition issue in Mumbai. His operation against unauthorised slums was stopped by Sonia. Union petroleum minister Mani Shankar Aiyar's observation—at being prevented by a Sena mob from attending a private ceremony in a five-star hotel—that the Congress no longer has the clout to fight the Sena or NCP on Mumbai's streets raised Deshmukh's hackles.

Deshmukh dismisses it as "compulsions of a coalition". Even so, the two parties' ambitions to outgrow the other is hurting the coalition. In the government, they co-exist, outside it they are rivals. It's a contradiction that neither Sonia nor Pawar has bothered to address.

River Of Books For A Dry Land