After years of war, Afghans go to elect a president. Will this thirst for democracy conquer the warlords? 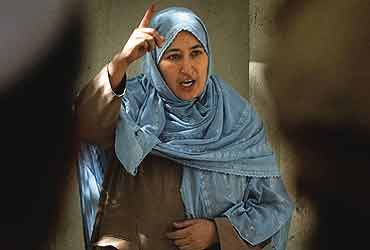 Afghanistan's first election campaign is under way and Masooda, the only woman among the 18 presidential candidates in the fray, is first off the mark. What she lacks by way of a power base, the 41-year-old paediatrician makes up with pluck. Using medical metaphors, Masooda promises to "put an ointment to heal the wounds" of Afghanistan if she wins the election. "Our people are tired of strife and war. They want to get rid of the warlords. They want a civil democratic government," she says.

Masooda is quite right. Though democracy is alien to over 10 million war-weary voters who are eligible to cast their ballots in the country's 34 provinces on October 9, there's a yearning for a participative, elected government which gives them security, jobs and homes. From an itinerant photographer in downtown Kabul to a grizzled highway security guard in the craggy mountains on the road to Jalalabad to a harried returnee in a fetid refugee camp to a feisty young girl in Kandahar who has fudged her age only to be able to cast her vote, most people are very enthusiastic about the polls.