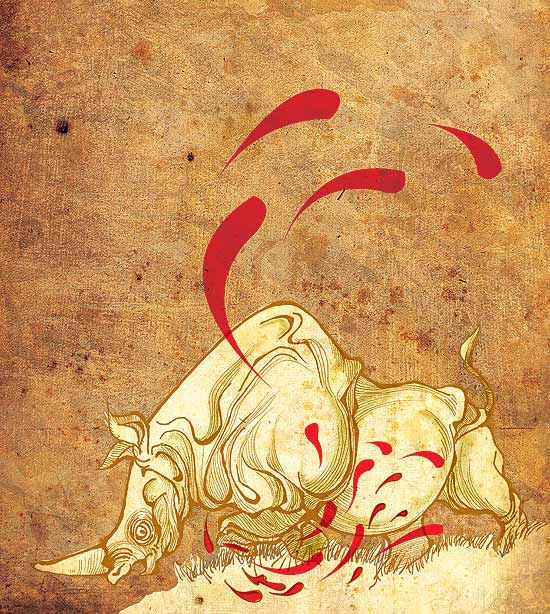 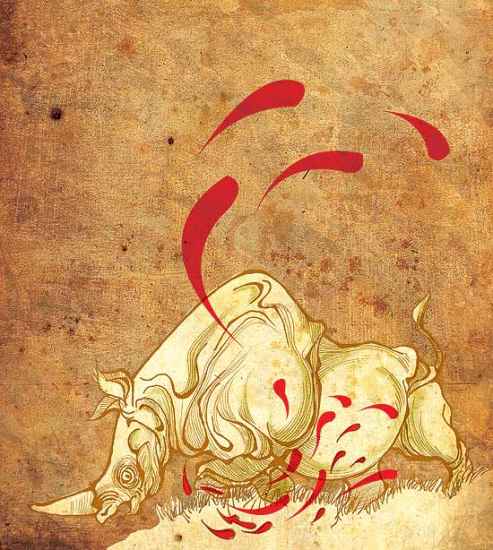 The Oath Of The Vayuputras
By Amish Tripathi
Published by Westland Ltd | Pages: 575 | Rs. 350

Vishwadyumna quickly gave hand signals to his Branga soldiers. The hunting party went down on their knees. Kartik, who was right behind Vishwadyumna, whistled softly as his eyes lit up. “Magnificent!”

Vishwadyumna turned towards Kartik. While most of Shiva’s convoy was settling itself into the visitor’s camp outside Panchavati, a few hunting parties had been sent out to gather meat for the large entourage. Kartik, having proved himself as an accomplished hunter throughout the journey to Panchavati, was the natural leader of one of the groups. Vishwadyumna had accompanied the son of the Neelkanth. He intensely admired the fierce warrior skills of Kartik.

The rhinoceros was a massive animal, nearly four metres in length. It had bumpy brownish skin that hung over its body in multiple layers, suggestive of tough armour. Its most distinctive feature was its nasal horn, which stuck out like a fearsome offensive weapon, to a height of nearly fifty centimetres.

“I know,” whispered Kartik. “They live around Kashi as well. They’re nearly as big as a small elephant. These beasts have terrible eyesight, but they have a fantastic sense of smell and hearing.”

Vishwadyumna nodded at Kartik, impressed. “What do you propose, my lord?”

The rhinoceros was a tricky beast to hunt. They were quiet animals who kept to themselves, but if threatened, they could charge wildly. Few could survive a direct blow from their massive body and terrifying horn. Kartik reached over his shoulder and drew out the two swords sheathed on his back. In his left hand was a short twin-blade, like the one his elder brother Ganesh favoured. In his right was a heavier one with a curved blade which was certainly not appropriate for thrusting. This weapon was perfect for swinging and slashing—a style of fighting Kartik excelled at.

Kartik spoke softly, “Fire arrows at its back. Make as much noise as you can. I want you to drive it forward.”

Vishwadyumna’s eyes filled with terror. “That is not wise, my lord.”

“This animal is huge. Too many soldiers charging in will cramp us. All it would need to do is swing its mighty horn and it would cause several casualties.”

“But we can fire arrows to kill it from a distance.”

Kartik raised his eyebrows. “Vishwadyumna, you should know better. Do you really think our arrows can actually penetrate deep enough to cause serious damage? It’s not the arrows but the noise that you will create, which will make it charge.”

“Also, it is standing upwind and your positioning behind it would be perfect. Along with the noise, the stench of your soldiers will also drive the animal forward. It’s a good thing they haven’t bathed in two days,” said Kartik, without any hint of a smile at the joke.

Like all warriors, Vishwadyumna admired humour in the face of danger. But he checked his smile, not sure if Kartik was joking. “What will you do, my lord?”

Saying this, Kartik slowly edged forward. Right on to the path that the bull would charge on, when attacked by Vishwadyumna’s soldiers. The soldiers, meanwhile, moved upwind, behind the rhinoceros. Having reached his position, Kartik whistled softly.

A volley of arrows attacked the animal as the soldiers began to scream loudly. The rhinoceros raised its head, ears twitching as the arrows bounced harmlessly off its skin. As the soldiers drew closer, some of the missiles managed to penetrate enough to agitate the beast. The animal snorted mightily and stomped the dirt, radiating strength and power as light gleamed off its tiny black eyes. It lowered its head and charged, its feet thundering against the ground.

“Along with the noise (of your arrows),” said Kartik, “your stench too will drive the animal forward. It’s good your soldiers haven’t bathed for two days.”

Kartik was in position. The beast only had side vision and could not see straight ahead. Therefore, it was no surprise that it crashed into an overhanging branch in its path, which made it change its direction slightly. At which point, it saw Kartik standing to its right. The furious rhinoceros bellowed loudly, changed course back to the original path and charged straight towards the diminutive son of Shiva. Kartik remained stationary and calm, with his eyes focused on the beast. His breathing was regular and deep. He knew that the rhinoceros couldn’t see him since he stood straight ahead. The animal was running, guided by the memory of where it had seen Kartik last.

Vishwadyumna fired arrows into the animal rapidly, hoping to slow it down. But the thick hide of the beast ensured that the arrows did not make too much of a difference. It was running straight towards Kartik. Yet Kartik didn’t move or flinch. Vish­wa­dyumna could see the boy warrior holding his swords lightly. That was completely wrong for a stabbing action, where the blade needs to be firmly held. The weapon would fall out of his hands the moment he’d thrust forward.

Just when it appeared that he was about to be trampled underfoot, Kartik bent low and, with lightning speed, rolled towards the left. As the rhinoceros continued running, he slashed out, his left sword first, pressing the lever on the hilt as he swung. One of the twin-blades extended out of the other, slicing through the front thigh of the beast, cutting through muscles and veins. As blood spurted rapidly, the animal’s injured leg collapsed from under it and it grunted, confused, trying to put weight on the appendage, now flopping uselessly against its belly.

Admirably, it still continued its charge, its three good legs heaving against its bulk as it struggled to turn and face its attacker. Kartik ran forward, following the movement of the animal, now circling in from behind the beast. He hacked brutally with his right hand, which held the killer curved sword. The blade sliced through the thigh of the hind leg, cutting down to the bone with its deep curvature and broad metal. With both its right legs incapacitated, the rhinoceros collapsed to the ground, rolling sideways as it tried to stand with only two good legs, writhing in pain. Its blood mixed with the dusty earth to make a dark red-brown mud that smeared across its body as it flailed against the ground, panting in fear.

Kartik stood quietly at a short distance, watching the animal in its final throes.

Vishwadyumna watched from behind, his mouth agape. He had never seen an animal brought down with such skill and speed.

Kartik approached the rhinoceros calmly. Even though immobilised, the beast reared its head menacingly at him, grunting and whining in a high-pitched squeal. Kartik maintained a safe distance as the other soldiers rapidly ran up to him.

The son of the Neelkanth bowed low to the animal. “Forgive me, magnificent beast. I am only doing my duty. I will finish this soon.”

Suddenly, Kartik moved forward and stabbed hard, right through the folds of the rhinoceros’s skin, plunging deep into the beast’s heart, feeling the shudder go through its body, until at last it was still.

Ducks To Die For