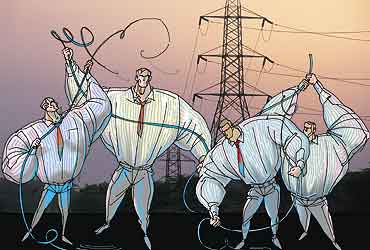 Gautam Adani
Trading in Sikkim, Maharashtra. May sell 500 MW in next six months.

Shashi Ruia
Essar’s blueprint: to hike generating capacity by 1,200 MW in the next two years

Get ready for a new power struggle, this time with leading Indian business houses like the Ambanis, Tatas, Ruias and Adanis in the fray. All of them, and a few smaller players, will soon be freely buying and selling electricity. So, are we seeing the emergence of power traders, channelising surplus electricity to areas where there's a shortage? And what of the distribution companies? They were basically buying through bilateral agreements with generating firms, but now will be able to source their needs at the cheapest possible price.

Imagine this. A private firm is inking deals with generating companies in Sikkim, Kashmir, Gujarat, Tamil Nadu. And finalising buyers located somewhere else in India. The excess power from these states is put on the grids and directed to far-flung cities and towns where there's a shortage. Electricity becomes a product that is transported anywhere, wherever, whenever. After the privatisation of generation and distribution, transmission was only the logical end.

The new Electricity Act 2003 will change the existing scenario as it recognises power trading as a distinct business and allows the private sector to trade in the commodity. The Power Trading Corporation (PTC) and NTPC Vidyut Vyaapar Nigam had been trading in power in a limited way, but they were mostly supplementing the bilateral arrangements. The new entrants, however, could end power shortages, which now range between 8-10 per cent with peak shortages of above 13 per cent. Despite an annual capacity of about 2,00,000 MW, of the five power zones, the East and Northeast are surplus in power while the North, West and South face considerable shortages.

Says Ashok Basu, chairman, Central Electricity Regulatory Commission (CERC), which will oversee the trading activities: "Trading in electricity will promote competition, efficiency and economies in the power sector because market forces will have to eventually rule this sector too." Adds R.K. Madan, former CMD, PTC, and currently heading the power operations of the Adani Group: "Only trading can provide a platform for efficient utilisation of our generation and transmission resources. We have the capacity but regional and seasonal imbalances have created a sense of shortage."

As of now, seven private firms have applied for trading licences with the cerc. Apart from the bigwigs mentioned above, there are also smaller players like Amalgamated Transpower, Koyla Power and Global Energy. Although licences are expected to be issued by April first week, the private sector has been already allowed to commence operations at its own risk. For the bigger players, trading will allow them to become integrated power utilities for they are already into generation and/or distribution.

Explains Mohan Gurunath, vice-president, Tata Power, which is setting up a trading firm: "The comfort level of consumers with a trader with generation capacity will be higher than a pureplay trader." To augment its trading operations, the company is planning to add generation capacity in the eastern region. Even Essar Power is preparing a blueprint to hike its generating capacity by over 1,200 MW in two years' time.

Reliance too has its own power plants, apart from distribution licences in Delhi and Mumbai. Says Anil Ambani, CMD of BSES, which plans to trade all over the country, "We want to get into power trading and we have applied for distribution licences in circles." BSES director J.P. Chalasani admits that the company, soon to be rechristened Reliance Energy, has received a favourable response from both producers and buyers. However, among the big guns Adani Exports is surging ahead, having already started trading in Maharashtra and Sikkim. It is also finalising two other contracts and hopes to sell at least 500 MW in the next six months.Its projected turnover from the business is over Rs 1,000 crore in the next 18 months.

Smaller firms like Amalgamated Transpower and Global Energy are looking at only a few states. While the former is negotiating with Madhya Pradesh, Sikkim, Orissa and West Bengal, the latter is wooing the states of Goa and Delhi. What has made it easier for them to compete with their more powerful counterparts is that the business requires little investment, has no gestation period and offers flexible options.

Says Madan: "Currently, trading comprises just 5,000 million units. By 2012, we can expect it to increase to around 80,000 million units." The quantum jump will need to be facilitated by other allied policies. The open access in transmission allows traders to supply power on existing transmission lines and another one permits captive power units, which run at low capacities, to sell excess power to their respective grids.

So, how will the consumer gain by these changes? More importantly, will it reduce the current mess in the power sector? At present, the generators face problems in recovering huge dues from buyers, mostly the ailing state electricity boards. Once trading becomes common, the risk will shift to traders who may either decide not to overexpose themselves or suffer adversely. In the first case, it will not change the power situation too dramatically and, in the latter, it will make the sector more fragile. This may happen despite cerc's stringent requirements for power traders, which includes a net worth of between Rs 2-25 crore, a reasonable creditworthiness and technical competence.

That's why experts feel that the government should have first addressed issues relating to infrastructure and generation. Says a report by consultancy firm Fitch: "India's T&D and technology infrastructure is currently not suitable for true power trading... (and) it needs close monitoring and regulation to prevent risk-taking innovations from outpacing technological or regulatory capabilities." A World Bank report on power sector reforms adds that initially developing nations should "focus on privatisation of supply and distribution, and reform of power tariffs—and introduce a central energy trader focused on encouraging supply to meet demand." The Bank also advocates "limited forms of competition (in trading) that can evolve to full wholesale competition through spot markets once the sector can manage full competition without uncontrollable market power." But, even the Bank admits that "full retail competition is expensive and complicated to implement".

On the tariff front too, the benefits may not be high. For one, the private sector will now have to factor in the T&D losses in their pricing structure. And, unlike the state-owned generators and sebs, the traders are unlikely to subsidise their prices. Tariffs, therefore, may go up. The same will happen in the case of excess power supplied by captive power units. Adds Gurunath: "Most of the captive plants run on liquid fuel where the cost of power will be high. We produce at Rs 2 a unit. It will not be possible for the captive units to sell power at that rate."

Availability of power for trading is another issue. Basu agrees: "Since most of the available power is locked up in long-term power-purchase agreements, only 6-10 per cent power is available for trade today. This will increase in the future though." So, a full-fledged power exchange will happen in the future, but only after contentious issues like tariffs and subsidies have been addressed properly. In the short term: be prepared to pay more for power.