Light Up The Spiral

The world's oldest holistic design system is the new fad in the US. Will popular culture catch on like it did with yoga? 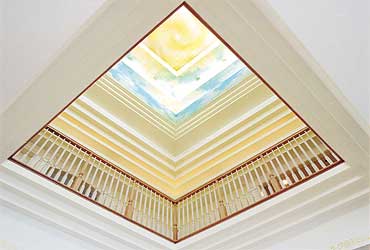 outlookindia.com
-0001-11-30T00:00:00+0553
When Carol and Kenneth Hardin built their 2,800 sq-ft 'vaastu' home in the hills outside Austin, Texas, they used aerated concrete blocks to keep out the scorching summer heat. The couple also avoided using synthetic glues and other chemicals. Even their water was collected on a rooftop cistern, with a solar water heater taking care of the heating as well. One of the results of such an environmentally friendly house was lower energy bills.

Hardin's house could have more to do with 'greenbuilding', a movement building up in the West, but the Hardins don't discount the critical role that Vaastu, arguably the world's oldest holistic design system, played in designing it. "The biggest challenge was working with the block, making sure it would be in the proper Sthapathya Veda conventions," says Carol. "Most Western builders have more leeway on measurements, but we had to be more exact."

There are many other home builders like the Hardins in America who swear by Vaastu aka Sthapathya Veda aka "the new Feng Shui" these days. It's still early days on whether it will have the same impact on American popular culture as yoga. But right now, Vaastu does not appear to be going the faddist burnout route. For one, its main patron, Maharishi Mahesh Yogi—a canny importer of Indian concepts to the West—is pumping in millions of dollars into Vaastu constructions to prove how serious he is. His consultants and architects, based in Fairfield, Iowa, are passionate about what they do and produce countless testimonials on Vaastu's power to improve relationships and profit margins alike.

No wonder Vaastu's got off to a tremendous start here. Consider this. In its five years of business, Maharishi Global Construction—which wants "to reconstruct the world in the light of the Vedic principles of construction, Sthapathya Veda, Vastu Vidya"—has overseen around 250 Vaastu structures, according to Eloise Raymond, sales director. The company works with designers and builders by giving precise orientation and measurements to the overall building and individual rooms and by ensuring that proper materials are used, a copyrighted system it has dubbed Maharishi Sthapathya Veda. "We signify this discipline by putting his name in front of it," says chief architect Jon Lipman, "so people know that what they are getting has been rigorously restored to its ancient Vedic purity."

Among the company's larger projects has been a part of the Heavenly Mountain resort community in the Blue Ridge mountains of North Carolina, and an 85,000 sq-ft office building for Books are Fun, a Reader's Digest subsidiary based in Iowa. And then there's the Comprehensive Blood and Cancer Center, located in Bakersfield, California. At the cancer centre, says Lipman, "patients notice they actually enjoyed waiting in the waiting room".

Of course, the Maharishi's pitch on Vaastu is just one side of the coin, the well-preserved side that invokes ancient seers and precise, timeless truths. Other recent votaries of Vaastu include former supermodel and celebrity yoga promoter, Christy Turlington. Then there's Kathleen Cox, consultant and author of two Vaastu books, introducing customers to their "zone of tranquillity" and other Eastern ephemera. "Vaastu focuses on the wellbeing of the environment surrounding the body."

Cox's hippy take has clearly won converts, particularly in the wake of Feng Shui's popularity. She performs about four or five "consultations" per month, and has lectured extensively to audiences in New York and elsewhere. Many of her listeners are attracted to any sort of system that brings order to the growing pile of clutter that defines the American aesthetic.

Other consultants are concerned that as Vaastu grows in popularity, homeowners could be taken for a ride by fly by night 'consultants' peddling quick-fix solutions. Michael and Robin Mastro, a couple who jointly run Vastu Creations in Seattle, have seen some consultants do the preliminary work without ever following up with their clients. "Some people take their fee and you never hear from them again," says Michael. He cites an example of a couple in Washington state who had received extensive but inappropriate advice from their previous consultants. "They had their bathroom in the southwest," he says. "That's the area of stability—it gives grounding and it's where you should have your master bedroom. And now their marriage doesn't have stability."

California-based Vaastu consultant Niranjan Mehta says like other Indian imports, Vaastu suffers from poor "quality control", sold as some sort of Indian exotica by "less qualified" consultants. "A lot of Indians don't have the ability to explain it," says Mehta, who credits Vaastu with helping his hotel business thrive in spite of the economic slump.

But Americans are already hooked. In her latest book, The Power of Vastu Living, Cox offers advice on achieving Vaastu in the workplace. She gives suggestions on how to turn the lowly cubicle into a spiritually-energised space. There's even something known as Vaastu art. Ranna Lachlan is an US-based Australian artist whose work's been exhibited in Washington and Munich. She started creating Vaastu and Feng Shui paintings while doing her doctoral research in India. "People are incredibly mobile today and can't alter their physical environment but they can put up a painting," says Lachlan, who has sold six Vaastu works so far. "If they have an eastern wall that doesn't have a window, they can put up a painting that has light in it...therefore bringing the light of the East in."

Clearly, this is a development some purists won't be happy with. Lachlan is sensitive to her role. Her fear, she explained, is that as Vaastu achieves mass appeal it will grow unrecognisable, in the same way that certain strands of Feng Shui have. "The western mind wants quick fixes, wants the information now," says Lachlan. "There are so many people involved in Feng Shui that there's an enormous amount of merchandising, anything from jewellery to piecemeal dishing out of fragmented information, so that people have to buy the next book and then the next book. Vaastu is more in its infancy in the West and I really hope those trends don't emerge." For the moment though, after yoga and ayurveda, Vaastu is, literally, hot property.