In objecting to 'Meenaxi', the Islamists have denied Husain interpretive latitude 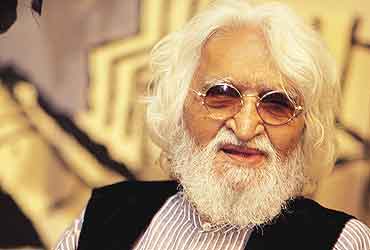 In 922 AD, Sufi saint Mansur al Hallaj was sentenced to a gruesome death by Abbasid emperor Muqtadir for the sin of apostasy. The Baghdad clergy had found his pronouncement of An-al Haqq (I am the Truth) a sign of the ultimate denial of God. Hallaj's statement was nothing more than an assertion that God resided within every creation, but this metaphysical interpretation cut as much ice with the Muslim particularists of 10th century Baghdad as a pluralistic reading of an Islamic text would with the current Unitarian Islamists, be they Afghani Taliban, Saudi Wahabis or homegrown apostasy-police such as the All India Ulema Council.

Thus, the Ulema Council and their cohorts pitched their assault against M.F. Husain, accusing him of using a Quranic verse to "depict the physical beauty of the heroine" in his movie Meenaxi. The factual baselessness of this accusation apart, it is perhaps fitting that the objection of the Islamists to Husain's creative expression involved his deployment of the term nur-un-ala-nur (literally, "light upon light"). This phrase comes from the famous 'Light Verse' in the Quran, which invokes an ineffable mysticism:

"Allah is the Light of the heavens and the earth. The similitude of His light is as a niche wherein is a lamp. The lamp is in a glass. The glass is as it were a shining star. This lamp is kindled from a blessed Tree, an olive neither of the East nor of the West, whose oil would almost glow forth of itself though no fire touched it. Light upon Light. Allah guides unto His light whom He will. And Allah speaks to mankind in allegories, for Allah is knower of all things." (An Nur, 24:35).

Like much of the Quran, and perhaps more so, this verse does not lend itself to a literalist reading. Thus, the Ulema Council's contention that the term "Light upon Light" has been "used to define the persona of the Prophet" is an interpretive act. Evidently they have no desire to allow Husain any similar interpretive latitude. He must be punished for the sin of interpretation. Alas, they do not have the power to censure him according to the precedent set a thousand years ago against Hallaj. One must make do with more circumscribed punishments. Such as the withdrawal of the movie from theatres. An occasional epiphany like the Rushdie fatwa apart, the victories of Islamists against South Asian apostates have been nothing but ineffectual symbolic acts, aimed more often than not at their own community, like the recent excommunication of 54 Muslims in Agra for their views on Vande Mataram (and consequently, rendering their marriages invalid!). Their interventions in the Indian cultural sphere have always carried an element of the comic, such as the insistence that the title of the 1997 movie Mustafa be changed to Ghulam-e-Mustafa, or that the words of a song from the 1994 film Aatish be changed. No doubt, they take their cues from their counterparts on the Hindutva side, such as Bal Thackeray's menacing insistence upon "editing" Mani Ratnam's Bombay in 1995, or the blocked shooting of Deepa Mehta's film Water by the Bajrang Dal in 2000.

So eventually Husain withdrew his film from the market, just as he had withdrawn his Saraswati painting when it was subjected to the ire of Shiv Sena activists. Of course, his decision immediately gave cause for concern that his position would give an opportunity to Hindutva ideologues to further alienate the Muslims from the mainstream. Why did he "appease" the Muslim ulema for Meenaxi when he was a bit more defiant in the case of the Shiv Sainiks ransacking his exhibition? One easy answer is that he did not want to go through the same level of distress again, which is perfectly understandable at the personal level. However, he should also be aware of the larger ramifications of his decision. From now on, there is no doubt that Husain, and perhaps the Muslim artist in general, will have a tougher time negotiating the tightened boundaries between the secular and the profane worlds.

One must also wonder whether this act of the Ulema Council, representing as it does an increasing insularity, is not related to an emerging siege mentality within the Muslim community. After all, it's now becoming fashionable in the Indian mainstream to express impatience with the minority community, with a tradition of secularism increasingly viewed as appeasement. How can the Muslim community craft a communitarian response to a charged social situation where every action can have a reaction that is opposite but hugely unequal? The response within the community has been multifaceted. If the intransigence of the Ulema Council represents one end of the continuum, the other end constitutes a poignant capitulation, represented in acts such as Zaheer Khan's endorsement of Bal Thackeray or Rafiq Zakaria's suggestion that Muslims support the BJP, as a way to avoid future isolation. The challenge for the community lies in choosing a path that avoids these extremes, and includes both a principled opposition to the forces of communalism, a commitment to internal dialogue and a pluralistic interpretation of the faith and its practice.

Fear Has Its Uses