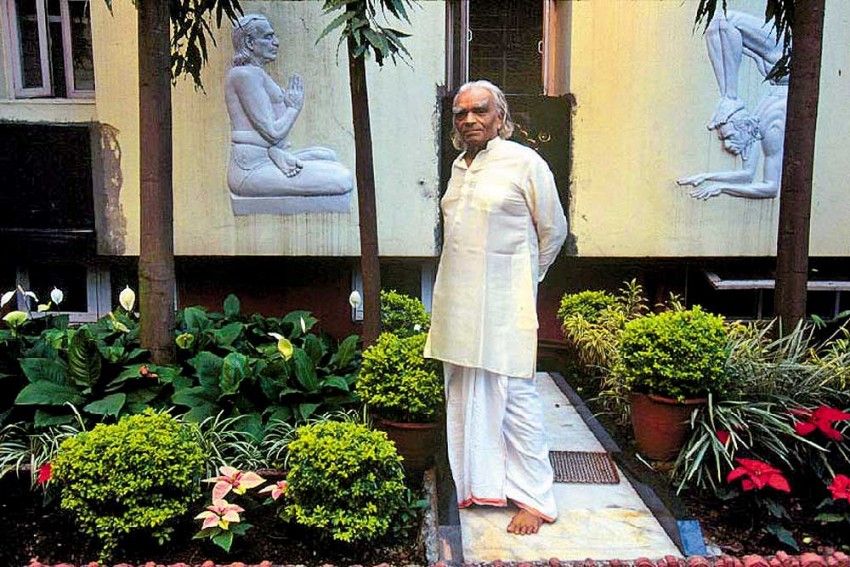 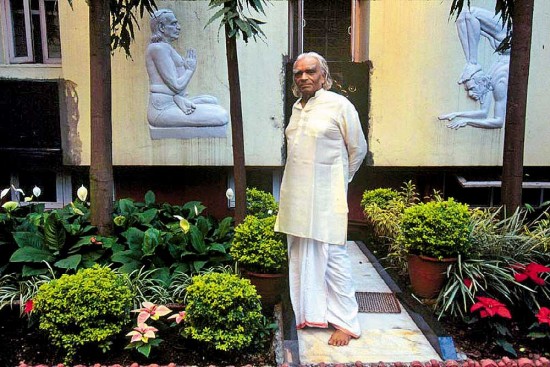 There are only a few true-blue geniuses I have seen at close quarters in my life, of whom Sachin Tendulkar, Roger Federer and Yogacharya B.K.S. Iyengar come top of mind. The defining characteristic of all of them is an undying passion, a mastery of skills that is both strong on technique as well as highly nuanced, raising it to an art form, an unceasing quest for perfection. The commitment they have shown for their pursuits is as much their hallmark as the body of work they have accomplished. The difference between them, of course, is that while Tendulkar and Federer are sportspersons par excellence, Yogacharya Iyengar was more than just an outstanding yoga teacher: he was a life-coach, so to speak, without parallel.

My introduction to Yogacharya Iyengar, his methods and wisdom, came in excruciating circumstances. In early 1994, I suffered a bout of vertigo which left me debilitated. I could barely talk or sit up, leave alone walk. Doctors, even those from a leading hospital in Mumbai, came up with foreboding diagnoses. One of them suggested that I may have suffered a stroke and prescribed the instant deployment of steroids.

In that state, I was willing to try even cowdung. However, what held me back from using steroids was the after-effects I had seen this had had on Indian cricket captain Mohammed Azharuddin when he had suffered from a groin problem; Azhar had started to lose his hair in tufts!

Lying in bed and miserable, I suddenly recalled that I had commissioned a piece in Sunday Mid-Day (which I was then editing) on Yogacharya Iyengar. I called up the feature writer who had done the article and asked her to fix an appointment with one of his yoga classes in Mumbai since I was incapable of travelling to Pune. Within a day, I found myself at the class in the Piramal Complex at Parel, where Jawahar Bangera and Birju Mehta, maestros in their own right now, were the helmsmen. I could barely hobble along. To my surprise (and fright), the first thing I was asked to do involved hanging upside down from a window sill, supported with a rope.

Here I was, barely able to stand, being asked to do what seemed impossible. Terrified, I was tempted to run away as fast as possible—except that I could barely stand on my own. My objections, however, were drowned out by the insistence of the instructors and soon I found myself gazing at the ceiling bottom up. I was kept in that position for almost 15 minutes. The immediate gain was the return of courage. By the third or fourth day, having advanced to other therapy asanas, I was able to walk without apprehension; within 10-12 days after that, I was on the squash court. Thereafter, Yogacharya Iyengar became integral to my life.

My first meeting with Guruji, as he was widely known, came a little while after my vertigo attack. He was a man at once both commanding and charismatic. Stout of build, long hair running like a lion’s mane over his head and till his shoulders, he stood out in a crowd.

He had a piercing gaze, but this would readily break into a twinkle. He didn’t mince words, but there was never ever any show of arrogance. He could be harshly critical, but as you got to know him better, you realised not just the depth of his understanding but also his compassion.

He was more than 75 years of age, but hardly old, carrying himself with the vigour, enthusiasm and curiosity of a man half a century younger. After our introductions, his eyes moved from my face to my legs and he was quick to admonish. “Suck those knee-caps in, don’t let them sag. Your legs are your foundation. If the foundation is weak, how can the rest of the structure hold up?”

Twenty years later, I continue to struggle with getting those knees sucked in properly to find the correct posture. When we met in 2012 at a function in Pune, I sidled up to him for a quiet word on this. “The knees, Guruji,” I said, “they still haven’t taken the desired shape.” “Yoga is always work under construction. Don’t lose awareness, keep the practice going,” was his pithy reply. There was no escape route with him.

I also discovered we shared a common interest: sports, and in particular, cricket. Guruji often talked of working on a series of asanas that would help cricketers to be brought out in book form. For short spells, he had trained a few international players at the Pune institute—Tendulkar, Kiran More, Rahul Dravid among them—which gave him a better understanding of the demands of the modern game on body and mind. He wanted to do more, but I suspect stayed away because he couldn’t quite fit into the rigmarole that is the Indian cricket establishment.

“He never minced words, but there was never a show of arrogance. He could be critical, but you could feel his compassion.”

The last time I met Guruji was on Guru Purnima in 2013. This would be an annual convention of sorts where he would speak to trainers, practitioners and lay visitors. He was 95, perhaps just a little short of strength because he sat on a chair longer than he normally would. If I remember correctly, there were a few stray sentences on mortality. But he was of good cheer as always. Death to him was always a non-issue. What mattered is what you did in the life you have. And this had to be based as much on physical effort as mental. The body fascinated him as much as the mind. The thrust was on finding the perfect equation between the two. A state of equanimity is regarded the goal of yoga, but Guruji never believed this was possible without proper alignment of the body, which only comes with focused physical effort.

Inspiration for this he set with personal example. A decade back, he dislocated a shoulder. He went about setting it right with diligent practice of asanas. When I heard of it, dwelling on the occasional radial pains in my right arm caused by cervical spondylosis seemed just so silly.

Yogacharya Iyengar was a titan whose passing away will not dim the light and learnings he shed on a subject that for so long was the subject of mystery and scepticism, more agonisingly in the land where it was born. While his values and practices were steeped in tradition, he was a modernist if ever there was one. He was abreast of the latest developments in medical science and always wanted to see how he could complement, supplement or reject this with his own learnings. The springboard of his inspiration, knowledge and faith was Patanjali. His acknowledgment of the remedial/cultural wisdom that he inherited from the sage and scriptures was total. But he was always forward-looking and bridged the past with the present superbly.

He was a seeker and thinker who emphasised on the experiential. He was of necessity didactic, but not dogmatic. The props he created for improving poses, postures and health—under fire from several other established practitioners as antithetic to yoga—are now considered vital. There are other non-dogmatic elements. He believed in complete equality of race, religion, social or economic strata. Yehudi Menuhin, Naseeruddin Shah, Sachin Tendulkar or everyday Joe, they all were the same to him. For him, ailment, body and mind mattered more than the individual.

Perhaps most importantly, Iyengar was without hubris of any kind: be it fame, money, titles. He was not a charlatan looking to cash in for power and pelf, or a moribund guru living in cuckooland. Indeed, he was a seer interested in the relief and benefit of the human race.

This nugget which I picked up from his book Light on Yoga after his death captures his philosophy best. “Love begets courage,” he writes. “Moderation creates abundance and humility generates power. Courage without love is brutish. Abundance without moderation leads to overindulgence and decay. Power without humility breeds arrogance and tyranny.” Succinct it may be, but from individual to community, to country to the world, there can’t be a better lesson of life.

(Ayaz Memon is a veteran sports writer and TV presenter.)