Light From The East

Meeting the challenge of communalism, hate politics and intolerance bravely and defeating it is a precondition to national development 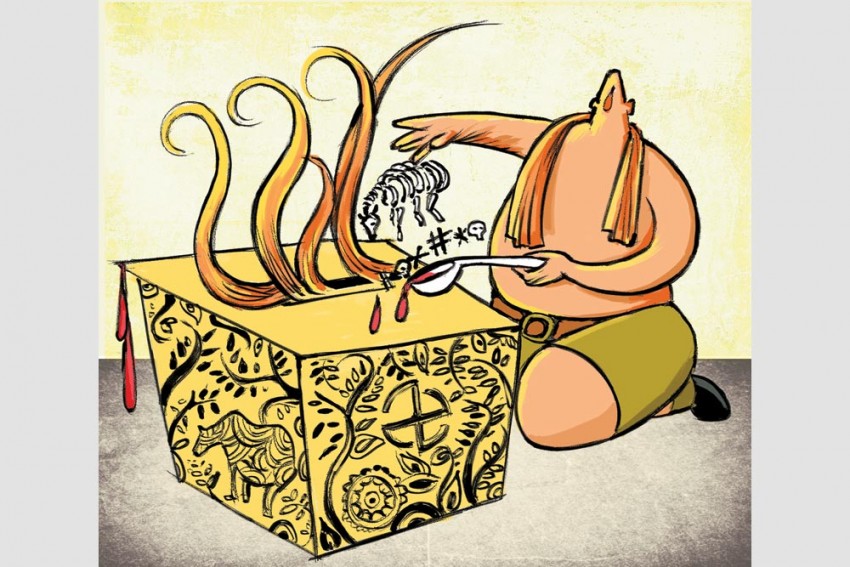 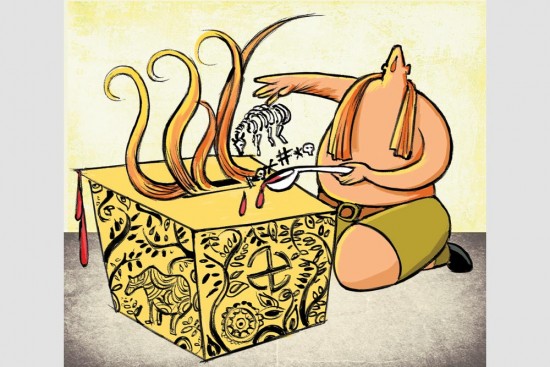 It is a self-evident proposition that the state of the nation is not to be conflated with the state of the ruling party. Nevertheless, it is hard not to concentrate on and celebrate the most stunning, the most portentous political development of the past 18 months. Port­en­tous, that is, for the party, parivar, and Strong Leader, the ‘vikas purush’ who swept to power in May 2014, with the dream of ruling India for at least a full decade, and rejigging it, notwithstanding its secular and democratic Constitution, into something resembling, or rather mimicking, a ‘Hindu rashtra’ that never was.

Anyone can see that the electoral rout in Bihar, India’s third most populous state with a population of over 100 million and 67 million enrolled voters, has cast a pall of gloom over the BJP’s leadership, its state units, and its rank and file. It is not going to lift any time soon, considering that the next series of state assembly elections, in 2016, does not bode well for the party. Its top leaders and spin doctors may claim that special, if not unique, factors lay behind the Bihar assembly ele­ction outcome—the massive ‘caste consolidation’, the unfo­reseen total transfer of votes among the constituents of the Mahaga­thban­dhan, the ‘high index of opposition unity’, and so forth. But whatever it was—there is a surfeit of instant analysis in the press and you can take your pick—it meant the shattering of the Modi regime’s image of invincibility and with it the dream.

Already, familiar, veteran voices are being raised from within the BJP against the way the party has been run. The statement issued on November 11 by Mar­­gdarshak Mandal venerables L.K. Advani, Murli Manohar Joshi, Shanta Kumar and Yashwant Sinha is a serious development, signalling a revolt against the personality cult of Narendra Modi and the takeover of the party by “a handful”, in other words, a self-serving clique. The statement alleges that “no lesson has been learnt from the fiasco in Delhi”, that “the principal reason for the latest defeat is the way the party has been emasculated in the last year,” and that there has been a refusal to take responsibility for defeats by “those who would have appr­opriated credit if the party had won”. The demand for an independent and thorough rev­iew “of the reasons for the defeat as well as of the way the party is being forced to kowtow to a handful, and how its consensual character has been destroyed” could snowball. The contradictions within the Sangh parivar are bound to sha­rpen. How the command centre, the RSS, responds to all this will be watched closely.

And, contrary to protestations, the political stock of the prime minister has taken the biggest beating. Conve­nt­ional political wisdom suggests that a PM should stay away from serious campaigning in state assembly elections; it is mostly counsel for political risk avoidance. Modi, Amit Shah & Co decided, for some reason, to defy this. The premier made an astonishing 30 visits to Bihar for electioneering, four before the announcement of the poll dates, and 26 during the formal campaign. In an arti­cle published in The Indian Express on the day of reckoning, P. Chidambaram has this elegant account of how this “unequalled pracharak” campaigned: “Mr Modi threw every­thing in his armoury into the Bihar elections. He threw in money, human resources, advertisements, invectives and innuendos on an unprecedented scale.... The BJP brought in reservation, the cow and finally Pakis­tan into the debate. The name of the game was polarisation.”

The flopping of the high-decibel Modi-Shah show and the strategy of communal polarisation, and the triumph of an unpr­ecedentedly broad-based all­­­­­­ia­nce which went on the offensive on a platform of social justice, secularism and inclusiveness and, when it came to invective and pol­­emic, gave as good as it got, sends a powerful message through the polity. It is a message of hope, optimism, of the vindication at the grassroots of constitutional and civilisational values.

During these 18 months, it has become increasingly evident to ordinary people that ‘vikas’ for the Modi reg­ime is, if not a camouflage, just another name for a neo-rightist path of development designed to make the rich richer and the poor poorer. Arun Shourie may not have construed this path the way I have, but his characterisation of the policies of the Modi government as “Congress plus a cow” is not far off the mark.

It has become evident that ‘vikas’ for the Modi regime is, if not a camouflage, just another name for a neo-rightist path of development .

It did not require much psephology to figure out that the big 2013-2014 swing in the mood of voters towards the Modi-spearheaded BJP was in inverse proportion to the move towards junk stock status that the Congress had managed to achieve after being at the Centre for a decade. The Congress had managed this through the bankruptcy of its socio-economic policies and its unm­atched levels of corruption. While we await the findings of serious, scholarly analysis—by the Yogendra Yadavs and others in research institutions like the CSDS—of what precisely happened in Bihar to produce an outcome so congenial to democratic and secular Indians, it does seem that the people of Bihar rejected the BJP for the right reasons: its communal and divisive politics, its pol­itical agenda of hate towards minorities, especially Muslims, and the instability, uncertainty and tensions this generated for them in their daily lives.

Many commentators, mostly of a liberal or ‘centrist’ ideological persuasion, have suggested that with the BJP’s politics of divisiveness flo­pping in Bihar, two roads are open to Modi—the road he has taken thus far or the road of ‘vikas’, which would mean jettisoning divisive politics. This kind of analysis may be well-meaning but the political understanding behind it is naive. The choice is illusory. The tactics and timing may vary according to the circ­um­stances. The 2014 BJP election manifesto, like some earlier manifestoes, may have been del­i­berately fuzzy, underplaying the specifics of the core agenda of the RSS-led Sangh parivar—building a Ram temple on the grave of the demolished Babri mosque at ‘Ram Janmabhoomi’, repealing Article 370, banning ‘cow slaughter’, rewriting history, introducing a uniform civil code, targeting minority rights, and so forth. But the core Hindutva agenda is the real political age­nda of the BJP-majority government, its raison d’etre, the real show. Just as Modi has doggedly refused to be rem­orseful about 2002, his response to acts of violence, assassinations, vicious intolerance, and the hate speech unleashed from within the parivar, including by some ministers and BJP MPs, is silence or pious generalities.

A statement issued by 53 academic historians in Oct­ober 2015 described the situation well: “Differences of opinion are being sought to be settled by using physical violence. Arguments are met not with counter argume­nts but with bullets. When a poor man is suspected to have kept a food item that certain sections do not approve of, his fate is nothing short of death by lynching. At the launch of a book whose author happens to be from a cou­­ntry disapproved of by certain groups, the organiser is disfigured with ink thrown on his face. And when it is hoped that the head of government will make a statement about improving the prevailing conditions, he chooses to speak only about general poverty; and it takes the head of the state to make the reassuring statement.... When writer after writer is returning their award of reco­­gnition in protest, no comment is made about the conditions that caused it; instead, ministers call it a paper revolution and advise them to stop writing. This is as good as saying that intellectuals will be silenced if they protest.”

The crescendo of voices against the assaults on free speech, reason and the scientific temper is getting louder and being heard from all over India. Writers, film-makers, historians, scientists and other intellectuals have protes­ted as we have not witnessed for a long time. And there is not a shred of doubt about who the assailants are. The Sangh parivar’s fingerprints are behind vir­­t­­ually every assault during the period the Modi government has been in office. Arun Shourie, no less, has confirmed this and, what is more, he has certified the protests as righteous, just and ‘Gan­dhian’. But the problem goes bey­­­ond speeches and acts of the Sangh parivar. Once a climate of intolerance is created and bolstered by official silence, apathy or apologetics bordering on collusion, various chauvinist and sectarian groups take it as open season on their targets. It is open season on anyone whose writings, speeches, ideas, opinions, views, actions, and creative work a group can claim to be ‘offensive’.

When we look at the state of the nation, several challenges as well as opportunities stand out. But it is the challenge of communalism, hate politics and engineered intolerance that has come to the fore. Meeting it intelligently, bravely, without equivocation—and defeating it—is a necessary condition for doing well in all other areas of national development. In this respect, Bihar can be said to hold up a mirror to the nation, which can take heart from what has just happened there.

(N. Ram, former editor-in-chief of The Hindu, is Chairman & Publisher of the newspaper group)

Related Opinions on What next for the BJP

The BJP’s divisive political strategy treated Dalits and Mahadalits as votebanks. The tie-up with Jitan Ram  Manjhi’s Hindustan Awam Morcha was a key element of the plan to capture Bihar. Ram Vilas Paswan’s Lok Janshakti Party was another crucial part of the strategy. But stunningly poor showing by both parties in dicated that Dalits all along the socio-economic cline continue to trust Nitish Kumar.