Telangana is done. Andhra and Rosaiah’s troubles have just begun. 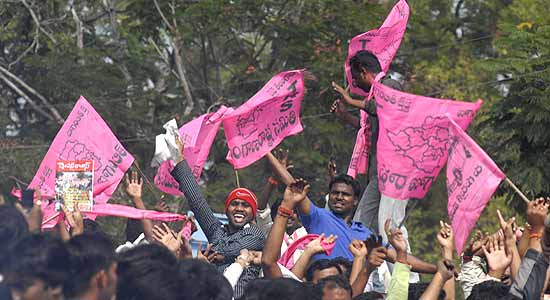 Andhra Pradesh politics has seen much turmoil since Y.S. Rajasekhara Reddy’s death in a helicopter crash. Hardly had the demand to anoint his son Jaganmohan been quelled that Congress chief minister K. Rosaiah sees himself facing another revolt in the party, this time over the granting of statehood to Telangana. The agitation sparked off by a fasting Telangana Rashtra Samiti (TRS) chief K. Chandrasekhar Rao (KCR) may have forced the Centre’s hand on an issue it would have preferred to keep on the backburner. But Union home minister P. Chidambaram’s midnight announcement on December 9 was no less momentous for that—a provisional assent to Telangana.

Less than 24 hours later, the Rosaiah government was in crisis, with 38 of its MLAs across Rayalaseema and coastal Andhra resigning. In all, 93 MLAs (53 Congress, 29 TDP and 11 Praja Rajyam Party) had submitted their resignations to speaker Kiran Kumar Reddy at the time of going to press. So far, none of the letters had been accepted. The Congress MP from Vijayawada, Lagdapati Rajagopal, has also submitted his resignation to Lok Sabha speaker Meira Kumar.

The crisis has put the Congress in a tenuous position—not just in terms of immediate survival but also long-term strategy, for Andhra Pradesh has been central to its fortunes nationally in recent years. In the 294-strong state assembly, it has 158 MLAs and it has to keep its flock together to ensure the government does not go into a minority. CM Rosaiah, it is learnt, was against the hasty decision by New Delhi, and it showed in his conditional acceptance of it. “A decision to introduce a resolution on Telangana in the assembly has been taken. This does not mean the state has already been divided. There is a process. We will pass the resolution only after a majority supports the same,” he said.

Chandrababu Naidu is irked at the unilateral decision. “It’s a panic reaction. The Centre has bungled,” he says.

Meanwhile, TDP chief Chandrababu Naidu hit out at the Centre for taking a “unilateral decision” without so much as consulting the other parties in the state. “It’s a panic reaction. The Centre has bungled in handling the crisis,” he said. The TDP and Congress MLAs from Rayalaseema and coastal Andhra feel the sentiments of eight crore people have not been considered while taking such a crucial decision. Says P. Keshav, TDP leader from Rayalaseema: “Veerappa Moily and Chidambaram have conspired to break Andhra Pradesh into pieces. Chidambaram wants Tamil Nadu to be the most powerful state in the south. The rush is because of this.” Both the TDP and Chiranjeevi’s prp stress that it is not against the creation of Telangana, but were reacting against the “secretive and sudden manner” in which the Centre went about taking the decision.

In all this, the only contented politician was of course the mercurial KCR. When he had launched his indefinite fast on November 29, it appeared to be another one of his whimsical decisions. But 11 days later, the TRS was over the moon, having all but fulfilled its raison d’etre. KCR himself, after a sip of lemon juice to break his fast, was modest about his part, saying it was the victory of the students and the various Telangana groups. 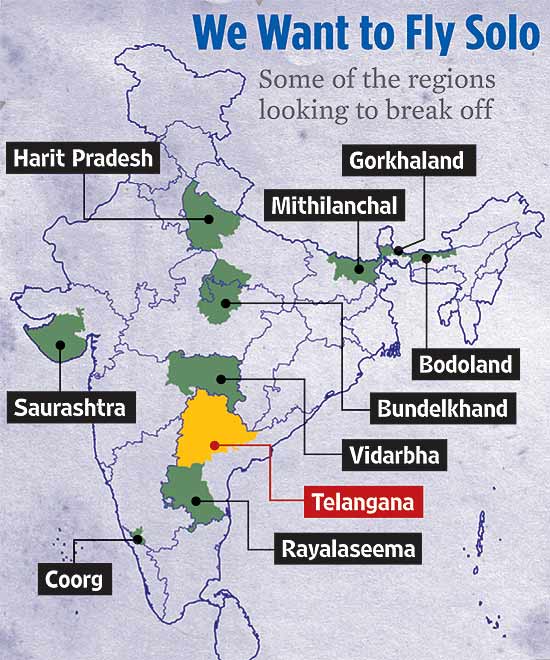 In fact, in the past two weeks the stir had snowballed from being just a political event and passed into the hands of thousands of students, intellectuals, rights activists, advocates, teachers, professors, government employees and workers. The Centre seems to have stepped in just before the December 10 TRS and students rally to the assembly, when intelligence and police officials alike warned of likely violence and Maoist infiltration in the movement.

After Chidambaram’s statement, the state Congress has been cautious in dealing with KCR. Higher education minister D. Sridhar Babu, a Telangana supporter, thanked KCR for calling off his fast while focusing on Congress chief Sonia Gandhi initiating the statehood. “The issue of a new state will be dealt with in due course...we’ll ensure the all-round development of Telangana,” he says.

But given the mood of his coastal MLAs, what can Rosaiah do to save the situation? Everyone agrees he cannot reverse the Telangana decision. At most he can offer more development funds for the areas represented by the piqued MLAs. Another potential sop would be an offer to make Hyderabad a common capital.

The Congress is missing YSR’s shrewd touch in all this. The late CM had strongly opposed Telangana, knowing Rayalaseema and Andhra leaders would rise in revolt. Rosaiah’s decision to leave things to the high command has backfired and his regime now faces an existential crisis. The development card YSR used to discredit the TRS has been run over by the charged atmosphere in Hyderabad and elsewhere. The days ahead will be crucial for Rosaiah. As for New Delhi, the tedious task of carving out India’s 29th state has just begun—it might face the heat on other statehood demands now. And what of KCR? He’ll find a fledgling state is a lot more work than an indefinite fast.