Life & Times Of A Treedom Fighter

Meet Nirakar, who dreams of sculpting a fellowship of one lakh trees before he exits 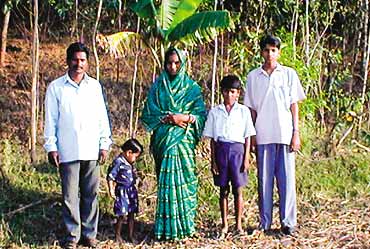 outlookindia.com
-0001-11-30T00:00:00+0553
The play of names has almost a touch of fable here—Nirakar, the formless one, regenerating the primal form of a forest that had passed into the mist. For the last 20 years Nirakar Mallick, a small farmer in Orissa’s Kendrapara district, has been greening a coastal landscape that had of late been experiencing more of brown. Droughts, as they are wont to be, are cruel in these parts. At other times, it’s excess water that’s the bane. Nirakar’s latest sally—the rebirthing of a forest on a two-hectare stretch circling the river Brahmani near his village—came after the green patch was denuded in the 1999 supercyclone.

The tidal waves that had swamped Orissa’s coasts had led to heavy soil erosion, rendering these villages forever vulnerable to floods. But now, thanks to Nirakar, over 5,000 trees of sundry varieties cover the area. This has not only helped restore the local ecosystem but also provided a potential source of income to the community.# People, however, were sceptical in the beginning. They were losing out on grazing ground for cattle. Some were also suspicious of Nirakar’s motives, fearing he was out to grab government land. But once the trees began shooting up and the entire village looked rejuvenated, everybody was won over. Nirakar, for one, never made any bid to corner the fruits of his labour.

So now there are fruit-bearing trees in the forest—jackfruit, mango, guava, coconut—as well as timber-rich ones like teak, casuarina and eucalyptus. Not all of the 7,000 seedlings he’d planted, and looked after as if they were his own offspring, survived the elements. That didn’t deter him, and Nirakar proudly says that as long as he is alive no one from the area would ever harm a tree.

Over the years, Nirakar has spent a small fortune out of his own hard-earned savings in greening missions. As a driver in the Orissa Lift Irrigation Corporation (OLIC), he’d get about Rs 3,000 a month. From this, he would put aside Rs 500 for planting trees. For the last two years he has not been receiving his salary from the defunct OLIC. He manages to make ends meet by working his share of the one-acre farmland inherited from his father.

Born in 1962 in a poor Harijan family in Aliha village, Nirakar inherited a feel for the soil and a green thumb from his father. A good student, he had to quit studies after Class 9 to take up a job. He joined the OLIC in 1982, and got married the same year. Today, he’s the father of three sons and a daughter.

Though officially a driver, Nirakar is a jack of all trades, doubling up as mechanic, fitter, electrician and operator at Aliha’s lift irrigation project. For the area’s small farmers who depend on the water supplied through lift irrigation, he is nothing short of a hero.

Anti-hero too, for some, at a point of time. Traditionally, the Harijans of Aliha never planted coconuts. The Brahmins had told them that if they dared to plant the forbidden fruit, there would be death in the community. Nirakar broke this "divine" taboo. He got about a 100 coconut trees from the district agricultural farm and distributed it among his people. Today almost every courtyard in Aliha village has half a dozen fruit-bearing coconut trees. And no one died.

Nirakar’s wife is an enthusiastic partner in his green ventures. His children also help. He has now taken up plantation of 20,000 seedlings along the 3-km stretch from Manipatna to Singri in his block . Nirakar aims to plant at least one lakh trees before he dies.

Recognition has evaded him so far and Nirakar is least bothered. His only regret is that the government has not taken over maintenance of the forest from him so that it can be preserved for posterity. He hopes his good work is not lost after he is gone. He is, as you must have realised by now, crazy about his trees. "The trees speak to me," he says, "and God has paid me back richly in many ways. I need nothing more." If you want to do something more anyway, the address is: Nirakar Mallick, Singribazar, Aliha, district Kendrapara, Orissa. Phone: 270747

The Horn Of Plenty