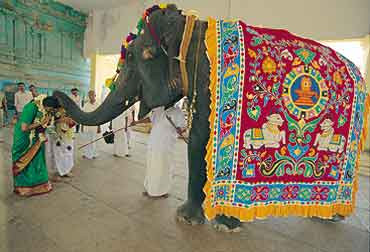 In Thirukkadaiyur, a coastal village 300 km from Chennai, every month some 600 couples come to reaffirm their faith in each other, perform prayers to prolong their stay on earth. From music director Ilayaraja to playback singer K.J. Yesudas, from Russians to Japanese, HC judges to politicians, Hindus, Muslims and Christians, a broad spectrum have sought out this little-known corner of Tamil Nadu in Nagapattinam district. They all hope to postpone death by invoking the gods. Obese couples who won't walk the treadmill, diabetics who can't cut down on food, the aged with their own peculiar ailments, they all come in the hope that mantras, homams and feeding the ritual fire will do what simple discipline and exercise may have done better. On the increasingly dangerous East Coast Road, there are at least two accident-mangled vehicles and much mangled bodies. Death stalks the road that's supposedly leads you closer to immortality. And so to Thirukkadaiyur.

When the Hindu male turns 60, it isn't just another birthday, it's a socio-religious event. The man remarries his wife of several years in the presence of children, grandchildren, relatives. (The woman, of course, does not get to indulge herself similarly at 60.) The remarriage ceremony, called Sashtiabdapoorthi (sashti is sixty, abdam the year, and poorthi is to complete), is considered most auspicious if performed at the 11th century Chola temple in Thirukkadaiyur. Every day, some 20 couples 'remarry' each other here before the presiding Shiva deity, in the linga form 'Amritakadeswarar'. As the devas and asuras churned the ocean for amrit, it coalesced into a linga. Hence Amritakadeswarar.