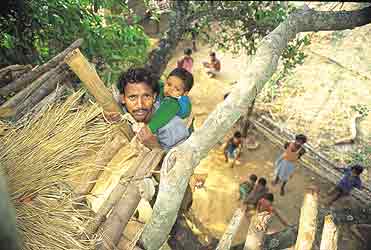 outlookindia.com
-0001-11-30T00:00:00+0553
Urmila Devi will never forget the moonless, chilly night two months ago when the elephants came visiting her mud-and-thatch home in Dumka's Jora Alam village. The twentysomething tribal girl was in labour, with a midwife attending to her. Her husband, Shravan Rai, and father-in-law Hiralal stood guard near the door. Close to midnight, she heard the angry herd trumpeting and descending on the village. Even as Urmila lay on the bed quaking in fear and her midwife cowered in a corner, Shravan climbed the family's tree-top home with their two-year-old baby girl. "Run, run!", he shouted. Hiralal, however, stood guard at the door, brandishing a flaming torch and a stick to keep the rampaging tuskers at bay. Even as the tuskers kept circling the hut, scared by Hiralal's torch and stick, Urmila gave birth to a second baby girl. Her husband and child watched the whole drama from their tree-top home.

A nightmare without end for the people of Dumka, it's the familiar though tragic tale of the man-animal conflict—hungry, lost elephants descending on villages, destroying property, raiding crops, trampling people to death. This time, at the receiving end are some 16 million people in 10,000 forest villages in Jharkhand. They share their habitat with 657 elephants. Ironically, this is part of the Jharkhand government's 'Elephant Project' area—9,406 sq km covering 17 forest divisions—which has been set up to secure the habitat for the pachyderms. Clearly, this hasn't really improved their lot and year after year they turn their fury on poor, helpless villagers.

So what do people like Urmila Devi do? Build tree-top homes and climb up whenever the tuskers come hunting. More than 10,000 tribals, belonging to about 200 villages in Kathikund, Gopikandar and Sikaripara blocks of Dumka, have been facing sustained tusker fury from a "gang of 13" for the past three years. Many of them have actually abandoned their mud-and-thatch homes to live precariously on tree tops. Every night they climb up to their tree-top home to feel a little secure. Six women have even delivered their babies in these tree homes.

Every year, between October and early summer, tuskers invade their villages, paying little heed to the burning torches, blaring drums and bursting crackers. The body count is on the rise. Till now, 17 villagers have been killed by the rampaging herd. Three women have given birth while fleeing from herds and two have suffered miscarriages in the process. Many have been left with broken limbs. Standing crops have been damaged and food stocks have been eaten away by these rampaging elephants. Farming has come to a halt in at least three blocks of Dumka and villagers are struggling to eke out an existence.

Talk about elephant attacks and the villagers still shudder with fear. Hopna and Lal Hembrom of Jora Alam village remember how their farmworker father, Ram Chandra, was attacked "and thrashed about and trampled upon by the elephants" in the fields two years ago, while the brothers watched from their tree-top homes. "No one could muster enough courage to save him. Now we tremble with fear even when anybody mentions the word haathi," they say. Dulli Rani of the same village delivered her third child on a tree house and cut the umbilical cord herself. "I was on the upper machhan looking at Dulli while she was delivering the baby on the lower one. Elephants were destroying our house below and one of them was standing just under the tree on which we were," recollects her husband, Sonuh. Basanti Tudu and Marandi Lugdi of Ghasipur village of the same block had miscarriages while fleeing the rampaging herd last March. "Until we're convinced that the elephants won't return, we'll not think of a child again," they say.

Similarly, in Ranudih, all the 13 homes were destroyed by the marauding animals this February.Today, Ranudih look like a war-ravaged village. The damaged mud houses of Manila Murmu, Ganesh Tudu and Phoolmuri Hembrom, Bhudhan Dehri and Sukhlal Dehri all have the same story of death and destruction to tell. Now, with some paltry government assistance, they have begun rebuilding their houses. But childless, widowed and, now, homeless, Manila Murmu has taken refuge with a neighbour. "How can I rebuild my house, when I don't have anything to eat? The elephants have taken away everything," she says, staring at her damaged mud house. It was more or less the same experience for the Paharia tribals of the Namodih village of Gopikandar block. Ten out of the 14 houses inhabited by 59 tribals were destroyed by elephants two winters ago, forcing the villagers to leave their battered homes for two months last year. In one such attack, Shailendra Dehri lost his mother and fractured his leg after he fell from the roof. Shailendra recounts: "My mother could not run away and was caught by the elephants. We later found her trampled and crushed body in the field."

Why have the elephants been running amok in Jharkhand? "It seems the animals have lost their way—earlier the villagers have not seen them in these areas. And once they've taken this corridor they keep coming back every year. It becomes a natural path for them as elephants can convey the routes to their herds over generations," explains R.R. Hembrom, conservator of forests, Dumka division. There are, according to Hembrom, other reasons as well. Says he: "It's basically the changing food habits of the elephants. They have tasted rice, banana, cane and haria, a local tribal brew made out of boiled rice and jaggery. They keep coming in search of this food and kill whoever comes in their way. Migration is a necessity for elephants and they're known to travel about 500 sq km annually."

But what's the government doing to check this menace? "We've hired a team of elephant drivers from Bankura in West Bengal and have been successful in chasing the rampaging herd out of Dumka into the Deoghar-Giridih jungles. But I can't give any guarantee that they won't return," says Hembrom.

Though the Jharkhand government has distributed about Rs 25 lakh to victims of elephants attacks, villagers complain that the compensation is not enough. In protest against government apathy, tribals of three affected areas blocked the main Dumka-Pakur road for three days in February this year, forcing the government to sign a memorandum to save them from the elephant menace. A pil has also been filed by the Jharkhand and Bihar unit of pucl and gram sabha members of about 200 tribal villages in the Ranchi High Court, pleading the court to save the lives of the Santhal-Paharia tribes of Dumka from elephant attacks. But there are no signs of the man-pachyderm conflict abating. And the tribals are still being driven up the tree.