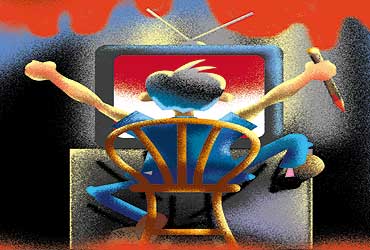 outlookindia.com
-0001-11-30T00:00:00+0553
Screening for Violence
No one doubts that TV is transforming, in overt or subtle fashion, the way children think and behave. Several studies have suggested that violence on the small screen can turn children violent. Public concern over this issue in India peaked a year ago with reports of fatal encounters of children aping stunts from the serial Shaktiman.

But a controversial US study published in Science claims it may even lead to aggressive behaviour in adulthood. The results of the study should hold true for Indian kids who also spend a lot of time in front of the TV.

But unlike in India, where there are no viewing norms, the American Academy of Pediatrics recommends 1-2 hours of viewing per day as okay. But even this might be too high, suggest researchers at Columbia University in New York who essayed the study. "If parents want to minimise the risk that their children grow up to commit aggressive acts, they should attempt to limit their viewing to less than one hour per day, on average," the study recommends.

Jeffrey Johnson and colleagues have tracked 707 families in New York since 1975. Using statistical tools, they distilled TV viewing from confounding factors, such as family income, education and prior history of violence, which might contribute to violent behaviour.

"People may be particularly sensitive to the effects of media violence in early adolescence," says Johnson. "It’s a critical period of life for the development of social skills and personalities."

Many psychologists view the link between media violence and violent behaviour as well-established. But other researchers say the link is still far from clear. Critics have panned the study’s methods. They say that only 88 adolescents averaged less than one hour in front of the box each day. This, they argue, is too small a group for a valid comparison, and that these kids may have had other anti-violence attributes, such as being devoutly religious, not reported by the study. The study’s authors, however, counter that these objections would not have affected the study’s basic results.

Do not ignore your child’s snores. Studies in the US suggest that snoring in kids may be a sign of obstructive sleep apnea, a common but under-diagnosed condition that has been linked to learning problems and retarded growth. The American Academy of Pediatricians has issued fresh guidelines which urge routine check-ups of kids to include questions about snoring to better diagnose the syndrome, which can often be cured by surgery to remove tonsils and adenoids. While snoring can be harmless in some children, it is also one of the common symptoms of the disorder. Sleep experts say the condition is underestimated as many parents and pediatricians may dismiss snoring as just an annoying habit.

The Good News
In this age, science is regarded as the final arbiter of truth.Claims of so-called traditional knowledge are taken seriously only after science has nodded its approval.Sudarshan Kriya, a set of breathing exercises prescribed as part of the stress management package offered by the Art of Living Foundation, was recently hailed by scientists as an effective antidote to depression and alcoholism. A team of researchers at the National Institute of Mental Health and Neurosciences in Bangalore claim that the results of this exercise compare favourably with imipramine, a popular anti-depressant. Sudarshan Kriya also helped reduce levels of depression in alcoholics.

Anti-depressants are not only expensive but can have potential side-effects as well. Dr Gangadhar, who authored the studies, put the patients of acute depression through various treatments, such as shock therapy, drugs, and breathing exercises. While shock therapy was found to be the most effective, breathing exercises performed better than drugs.

Stroke patients often spend thousands of rupees on expensive anti-clotting drugs like ticlopidine and clopidogrel. Now a new survey of anti-clotting drugs suggests that patients might do as well with the dirt-cheap aspirin. The Antithrombotic Trialists’ Collaboration, located in Oxford, England, analysed nearly 300 aspirin trials and concluded that aspirin is as efficacious as its dearer rivals despite their extensive advertising. Ticlopidine is no longer recommended by many physicians, while clopidogrel is not significantly better than aspirin in reducing further strokes. Typically, Ticlid and clopidogrel cost Rs 600 and Rs 360 per month, while aspirin costs Rs 50.

For Blood And Oil