Life Is An Iced Gateau 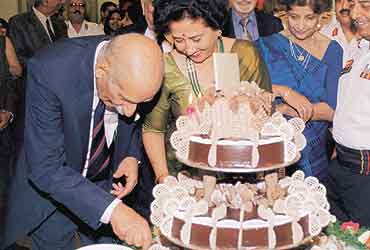 outlookindia.com
-0001-11-30T00:00:00+0553
Sam 'Bahadur' to his khukri-wielding 8th Gurkha Rifles, 'MacIntosh' to the Royal Scots in British Army, 'Blood and Guts' to all soldiers who fought beside him in every battle operation from World War II to the Indo-Pak war in 1971; Field Marshal Sam Manekshaw, India's most-decorated and loved soldier and son, is no stranger to orders and ceremonies. Till this year. When he had to put up a stiff resistance before family and friends who wanted him to attend a special function in Delhi that coincided with his birthday. For Manekshaw, the old-school gentleman cadet belonging to the IMA's first batch and India's first-ever Field Marshal, hasn't ever allowed his birthday to become a public event.

But only since this year's cake-cutting date (his 89th) dovetailed with a grander celebration that required his presence did the reclusive Manekshaw agree to fly in. The occasion, the premiere of In War and Peace, the first-ever film to document the extraordinary life and times of S.H.F.J. Manekshaw. His unexpected agreement got the party drums rolling in command headquarters. Here he was honoured in true fauji style with songs, toasts and a three-tier iced gateau on the eve of his birthday, before the film.

Splicing together rare military footage with conversations between Sam and grandson Jehan, In War...., directed by NID graduate Jessica Gupta, shows the master raconteur recall how he told 'the girl' (Indira Gandhi): "I guarantee a 100 per cent defeat in the '71 war unless we wait till December". He then led us to our most decisive military victory ever.

He jokes about the Australian doctor who attended to him after the attack in Burma where he took seven bullets. "He asked me what happened and I said a bloody mule had kicked me." Lt Gen Adi Sethna, director, Parzor Project, a foundation devoted to the preservation and promotion of Zoroastrian culture that funded the film, says: "People expecting a bang-bang movie will be surprised by this true-life story."

"He's our only authentic national military hero," says former foreign secretary J.N. Dixit. A fact borne out by the snippets, which show Sam speaking fluently in English, Gujarati, Hindi, Punjabi and Gurkhali (he was the first Indian officer to be given command of a Gurkha regiment). His enduring relationship with the Gurkhas was evident to all as he was offered a silver khukri to cut his cake.

Says his daughter Maja Daruwala: "He's always preferred a traditional birthday with a grand Parsi breakfast, a quiet family day, a tika before sunset by my mother, followed by dinner with close friends. But this year, we thought, this film was really a reason to celebrate." And bearing witness to the most triumphant years of his life, in Delhi's Air Force auditorium—packed with VIPs and ordinary people, faujis and fellow Parsis—everyone saluted and hurrahed in his own way for Field Marshal Manekshaw as he soldiers on to his next decade.

On Either Side Of The Hooghly