A few lobbies aside, general sentiment is: Onward ho! 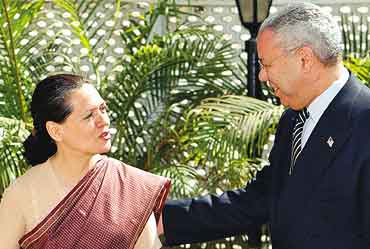 outlookindia.com
-0001-11-30T00:00:00+0553
The sudden substitution of a lead actor in the Indo-US love story has caused some tremors in Washington because the cast was banking on an extended run. The verdict was a huge surprise but so was the amazement at the resilience of the system. The chemistry between the Bush boys and the Vajpayee crowd was good, so there will be a bit of longing for the old days and ways. Political types in the White House will miss Brajesh Mishra but professional diplomats in the State Department, whose job it is to "maximise" relations, are raring to go and establish contact "quickly and substantively".

US officials are trying to be extremely sensitive about the "first footsteps" because they know the Congress is watching. The State Department is already working on dispatching Christina Rocca, assistant secretary of state for South Asia, to New Delhi to welcome the new leadership, say "Hullo", exchange phone numbers and stress the importance of Indo-US relations. David Mulford, the US ambassador to India, has been asked to postpone a trip to London and make friends and influence people in the new set-up. "We want to get started as soon as we can at all levels. To get off on the right foot is critically important," said a US official. "Indians are sensitive at the best of times and now they will be even more so." Washington will try its best to be warm to counter perceptions of cosiness past between the BJP and the Bush administration. But officials stress that Indo-US relations transcend personalities and are grounded in solid institutional ties. "The fundamentals remain the same. The strategic partnership remains the same," said another US official dealing with India.

However, there is some nervousness about Natwar Singh rising as foreign minister. Most people remember him as a Non-Aligned warrior, a man who may be critical of US positions and take a strident stand against Israel. Some think he is "frozen in time", even a bit sullen and not given to friendly chats on the phone—an essential of American diplomacy. But Singh, anticipating such fears, was quick to send signals through an interview where he talked of the importance of friendly relations with the United States. Washington also hopes the peace process with Pakistan will continue as will the economic reforms.

Says Sunil Khilnani, author of The Idea of India and now a professor of politics at the Johns Hopkins University, "Ideally, Washington would prefer to do business with governments that do not change at all—General Musharraf has this very much in his favour. The Bush administration assumed the BJP would remain in power, and one might even say that their policy was focused on the BJP, rather than being an India policy. But both Manmohan Singh and Sonia Gandhi recognise the importance of pushing the US-India relationship forward in the necessary direction." He added that the nervousness here was based on "poor information".

Jewish groups in Washington are worried stiff about how India might look at Ariel Sharon's Israel. Officials of the American Jewish Committee, who hosted Mishra as their chief guest and organised intimate dinners for L.K. Advani, are calling up the State Department to ask what it all means for Israel. Will the arms deals be called off? As for the Left Front being a part of the new coalition, Washington expects choppy waters, not a storm. American businessmen have jammed the phone lines and flooded mailboxes anxiously asking about the future of India's economic reforms. "When they see the word communist, they panic," a US official said. But parts of the administration are also nervous, specially those at the US Trade Representative's office. The BJP had promised to further reduce tariffs and raise the cap on foreign investment in the insurance sector after the elections, moves that could have helped Washington deal with the anger against outsourcing. All that now may have to wait.

But the news that Manmohan Singh will be India's new prime minister has calmed the waters considerably, returning smiles to anxious faces. And President Bush will soon be calling to congratulate the good doctor.