Amul melts many myths as it takes giant scoops out of the market. The motto—price lower, aim higher—gets them closer to biggie Kwality Walls. 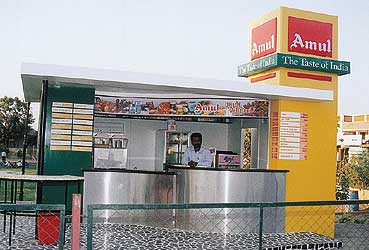 outlookindia.com
-0001-11-30T00:00:00+0553
It has done it in the past with milk and milk products. It's doing it again with ice-cream. Amul, India's best-known name in the dairy sector and an exemplar of the cooperative movement, is fast emerging as the country's top ice-cream brand by giving Kwality Walls of Hindustan Lever Limited (HLL)—the market leader for years—a run for its money.

In just six years, Amul ice-cream has become the leading brand in some major markets, including Gujarat and Mumbai. According to latest data, Amul's marketshare in the Indian ice-cream sector is 35 per cent, only marginally behind Kwality Walls. In 2000-01, it was 27 per cent.

Last year, Amul sold about 20 million litres of ice-cream as against HLL's 24 million litres. This February, Amul emerged as the number one brand in Mumbai's 7.7-million-litre ice-cream market, pushing Kwality Walls to second position. According to reports, Amul clocked a marketshare of over 37 per cent against HLL's 35 in Mumbai during the month. Amul had a marketshare of 20 per cent within the first year of its launch there.

In the next few months, Amul expects to reach the top elsewhere too. Its impressive growth record shows it could very well manage to do that. Says R.S. Khanna, general manager (north), Gujarat Cooperative Milk Marketing Federation (GCMMF): "We have expanded the market and created our place there. This year we will be the market leader in the country." Amul is perhaps better placed to achieve this feat as it is already India's largest producer and procurer of milk—ice-cream's main ingredient—and has an extensive distribution network spread across the land's length and breadth.

The GCMMF has Asia's largest integrated dairy products manufacturing and marketing operation and is India's largest food company. Last year, it had a turnover of over Rs 2,260 crore. It is currently a market leader in milk, butter, milk powder, cheese and cheese products under the Amul brand name.

Since its launch in 1996, Amul ice-cream has been growing impressively. While the Indian ice-cream market grew at an average annual rate of 20 per cent in the past few years, Amul grew by 60 per cent in western India and by 40 per cent in the north, averaging a 50 per cent growth throughout the country in 2001-02. It hopes to maintain or even exceed this growth rate in the next three to four years.

Currently, the ice-cream market is worth Rs 2,000 crore and is divided between branded and grey-market players. The branded market is of 60 million litres, worth Rs 500 crore. The main players here are Kwality Walls, Amul, Mother Dairy, Vadilal, Dairy Fresh and Baskin Robbins. Apart from these national names, there are other premium brands that have carved out a niche for themselves in regional markets, some with even a prominent share in the metros.

This second tier, taken along with the grey market, has close to 2,000 units and is dominated by Tulika and Rollicks in the east; Nature World, Pastonji, Naturals, Dinshaws, Havmor and Yum in the west; Nirula's in the north; and Arun, Joy and Nandini in the south.

The results are already there for all to see. Says GCMMF's Khanna: "When we came into ice-cream six years ago, Kwality Walls was selling 22 million litres per year. Today, they sell 24 million litres a year while we are selling 18 to 20 million litres. This shows that the market has grown. And this is just the beginning. We can easily double ice-cream consumption in this country."

He adds: "While multinationals are gradually restricting themselves to the metros, we want to go to the mass market and rural areas to create demand there. These are the markets that will give us volumes." Amul conducted an intensive countrywide market research to determine consumer behaviour. It found that the average Indian consumer was aware of ice-cream and most of them were active consumers. In fact, 95 per cent people, across rural and urban areas, were in this category. The restricting factor in most cases was the price.

To increase its spread and reach, Amul has undertaken an ambitious plan to increase its presence in the country. Till recently, Amul ice-cream was available in most parts of urban India except Delhi where Mother Dairy—which like Amul is the outcome of Operation Flood—is the market leader and West Bengal where it had test-marketed in a few cities. Amul launched its ice-cream in Calcutta in February and has been able to get a considerable marketshare in just two months. It is slated to launch its product in the lucrative Delhi market in the first week of May. To be one up on its rivals, Amul plans to set up 2,000 ice-cream outlets in Delhi, groundwork for which has already been done. A massive television campaign will also begin by the end of this month.

HLL officials were not available for comment (SEBI rules prohibit statements while a company prepares its annual results), but it was learnt the company is planning to restrict Kwality Walls operations to seven to 10 major cities and concentrate on the upmarket consumer segment, where prices and margins are higher. For instance, a premium product they have launched is Viennetta, a kind of cake dessert.

Amul, on the other hand, plans to expand its operations across urban and rural areas. It also plans to set up exclusive Amul parlours for selling ice-cream in major cities and its other products in various parts of the country. These "Utterly-butterly delicious" parlours have been designed by the Ahmedabad-based National Institute of Design. A few of these have already been set up in Ahmedabad and Mumbai. Says Khanna: "We plan to set up at least 100 such parlours in Ahmedabad and about 20,000 outlets across the country." Apart from selling Amul ice-cream, these parlours would also sell other Amul products and its new range of "Snowcap" fast foods, including pizzas, burgers, soups, softy ice-creams and branded coffee.

Amul is planning big for the future too. Says the spokesperson: "In ice-cream, we expect a business turnover of Rs 500 crore by the year 2005 and Rs 1,000 crore by 2010. This will be done by expanding the per capita consumption of ice-cream from current levels of 106 ml per year to 500 ml per year." Going by the rate at which it is growing, it does not seem such an impossible task.