A high court bans opening up of industries by executive order. Over to the SC now. 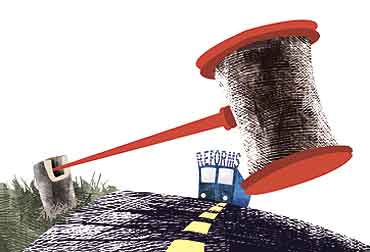 outlookindia.com
-0001-11-30T00:00:00+0553
Imagine all industrial deregulation carried out by the government in the past 15 years is suddenly void. Imagine the licence raj still continues and there has been no change in the way businessmen must get licences to start or expand manufacturing facilities. Nightmarish? A recent Allahabad High Court judgement on a sugar mill plea has made this a grim reality.

The Supreme Court is scheduled to hear the matter in November after special leave petitions were filed by the UP government, the Centre and Bajaj Hindustan against the HC order. The HC bench, comprising Justices Amitava Lala and Sanjay Misra, had ruled on August 24 that all opening up (delicensing) of industries that had happened since 1991 through executive orders—e.g. a notification or a press note—was to be deemed illegal. "The power of delicensing, if any, is an exclusive policy matter and within the domain of essential legislative competence," the order said. "No condition is attached to the law nor any power of delegation has been given by Parliament by law to the executives to delicense industry." This means that delicensing can only be authorised by Parliament.

Monnet Sugar of UP had filed the petition a year ago challenging the 1998 sugar delicensing order. If the Supreme Court—which, on September 19, stayed the HC judgement—agrees with the high court, all industries delicensed after 1991 may have to apply for a licence before starting new operations. Some 28 industry groups—from cement, drugs, textiles and electricals to cars, white goods and fertilisers under the Industries (Development and Regulation) Act, 1951—were delicensed throughout 1991-99 via notifications and press notes issued by the industry ministry, not through Parliament.

The high court's contention is that delicensing has to be cleared by Parliament through a law repealing the IDRA that introduced licensing (though not delicensing). How can an executive order allow delicensing when the laws prohibiting it remain? The future of about a hundred sugar factories, 18 of them gearing up for the crushing season in October amidst reports of a bumper sugar crop, and investments worth about Rs 4,000 crore hang in the balance. With them, the fate of 27 other industries and their subgroups.

Take sugar, an extremely tightly controlled industry like oil and fertilisers, where delicensing brought a whiff of fresh air and removed scarcity. But a furious crushing capacity expansion drive by some private mills is worrying the small ones. Says Sachin Mathur, head (research), CRISIL: "The industry is settling into consolidation mode and in the long term, only a few large players will rule. That's good, but there's still some way to go." Among the expanders are Bajaj Hindustan and Balrampur Chini. Mathur feels the expansions that have taken place can't turn illegal overnight.

But the most important tale that hangs behind the judgement is of the rationale and mode of executing important economic reforms in India, even delicensing. The government, in its special leave petition, has argued that sub-clause 29(B)(1) of the IDRA allows the Centre to "regulate industries, including the sugar industry, in terms of the 1951 Act, by way of industrial policy resolutions, notifications and guidelines or by way of press notes".

Unfortunately, an SC decision in a similar area has already queered the pitch somewhat for the government. The SC had ruled that public sector units nationalised by an act of Parliament can only be privatised through another act of Parliament, not an executive action. Former Union petroleum minister Ram Naik in the Vajpayee government had used this judgement to stop the privatisation of Bharat Petroleum and Hindustan Petroleum.

Therefore, if the SC supports the HC order, the Centre will have to bring an ordinance to amend the IDRA. A still better option is to get it passed by a Parliament session. And that, government sources feel, would be tough as it would imply garnering political support from all quarters, including the sensitive Left.

Says senior SC advocate Shanti Bhushan, who may appear against the petitioners in SC: "Over the years, laws in India have lost their relevance and become a tool of harassment. The IDRA needed to be changed as it became an instrument of harassment of industrialists by the babus. But surely, Parliament has to take a view on the repeal of the law, whether now or in the winter session. How can an ordinance serve the purpose? The industry is genuinely affected by the mad expansion."

Economist Bibek Debroy, who's done seminal work on Indian economic laws, agrees on the inevitability of a repeal of the IDRA but says it'd be an even tougher job. "If the Act is not scrapped, we are asking for trouble. But it can't be scrapped as long as the IDRA provides the only statutory backing to SSI reservation. That's the only part of IDRA that's still relevant. The courts do have a point. The answer has to be legislative." Says Hemant Batra, managing partner, Kesar Dass B: "Many policy decisions are made through notifications by the RBI, department of industry, and other government bodies which have an effect of undoing the direct provisions of the FEMA and other legislations. But nobody has challenged these as they are issued by the government. There are 3,500 central statutes with provisions allowing nodal bodies to issue rules and regulations that may act as guided missiles, as in the case of the Tobacco Act. Most of these go well beyond the statutory provisions and scope of the Act. But these are accepted in public good. Courts, too, go by public interest and do not intervene."

In the case of the sugar industry, the HC judges passed a strictly legal order that the SC may find difficult to quash. Batra feels the court may plump for remedial and corrective measures, by keeping the matter pending to enable the government to obtain parliamentary sanction. According to Saumitra Chaudhuri, member of the PM's advisory council, "the SC will have to step in and say the government's conduct has been within the law. Else, it will make a mockery of the institution of the executive branch."

In recent times, the executive and the judiciary have clashed ever so often, prompting an SC judge to suggest (sarcastically) a winding up of the courts. In this case, the SC will have to establish that public good and public interest are two different things, especially where public policy is concerned. Faced with strident or absent oppositions and lack of adequate strength, post-reform governments have passed too many important changes through executive actions, and too many orders that go beyond the scope of statutes.

Nor is reform foolproof or complete. In sugar, for instance, many of the controls still stay—there is a small levy quota, a minimum distance cane purchase norm, government-fixed cane prices, restrictions on molasses movement, licences for alcohol, etc. By scrapping controls sporadically through executive orders, the government, fairly or unfairly, manages to retain an enormous amount of discretionary power to control industry, farmers and political constituencies. It is now up to the Supreme Court to strike the all-important balance and save the legal as well as executive faces of the government.

From Small-Time To Big-Time In A Jiffy