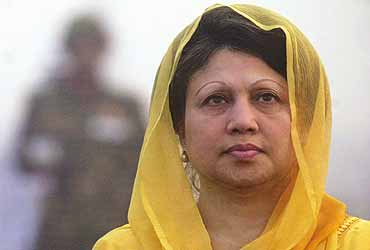 Bangladesh has had its own share of hidden histories, alternating between visibility and darkness—depending on who is in power. The perception among outsiders about Sheikh Mujibur Rahman's crucial role in the nation's independence notwithstanding, an entire generation had grown up in ignorance of who he was or the part he played in the 1971 liberation war. The anomaly was being redressed, but the pendulum seems to have swung back with the Bangladeshi Nationalist Party (bnp) assuming power in the recent elections.

Mujib's assassination in 1975 marked the beginning of this era of darkness. An orchestrated campaign to distort history and belittle his contribution was begun and sustained by the state-run radio and television, under the various governments, united in their almost passionate and compulsive disavowal of the father of Bangladesh. It reduced him to a tabooed subject.

A lot of that changed in 1996 with the political advent of Mujib's daughter Sheikh Hasina. She initiated measures to rehabilitate her father and restore all that was due to the man who was called Bangabandhu (friend of Bengal). A committee comprising leading historians was constituted to guide the rewriting of history textbooks and depict what the Hasina government called "the true history of our liberation movement". The official media too stepped in, focusing on Mujib's accomplishments. As if to make up for the lost time, the Hasina government hastened to name the country's important institutions and projects after the slain leader and his immediate family members.

However, in its zeal and haste, or even pique, the Hasina government completely ignored Gen Ziaur Rahman's contribution, another independence hero who too was assassinated in 1981 when he was still the country's president. The official electronic media completely blanked him out in the last five years of the...