The overwhelming sentiment among Muslim intellectuals is for a negotiated settlement 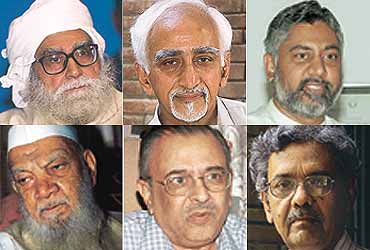 The romantic notion that Muslims should gift the land isn’t practical.

Margoob-ur-Rahman, Deoband vice-chancellor
Only the court can give a permanent solution. We are bound by its verdict.

Hamid Ansari, Former Diplomat
To say gift us the land is unfair. How did Kashi and Mathura figure in?

Zahid Ali Khan, Editor, Siyasat
Positions have hardened and we have to find a solution to fit the times.

Fakhruddin Mohd, Honorary Secy, MESCO
Give the AIMPLB and the Shankaracharya the time and space.

Imtiaz Ahmed, Political Scientist
The consensus has to come from the average Hindu and Muslim.

Liberal thinkers among Muslims are strongly of the view that the Ayodhya dispute be resolved once and for all through negotiations between Hindus and Muslims. A section among the intellectuals, albeit a hopeless minority, has gone so far as to suggest that Muslims "gift" away the disputed land in a "grand gesture of generosity", thus eliminating the biggest source of friction between the two communities.

Says eminent political scientist Professor Imtiaz Ahmed, "The Muslims should form a trust and build a temple at the site, with no preconditions, purely out of respect for Hindu sentiments." He does not see much point in waiting indefinitely for an ideal solution to the dispute. "Let's not freeze history. Perceptions change."

Few Muslim intellectuals are willing to go that far, but they do feel an amicable, negotiated settlement will go a long way in enhancing bonhomie between the two communities. Says Maulana Kalbe Sadiq of the AIMPLB, "If a solution is arrived at through a compromise, it will generate love and fellow feeling among Muslims and Hindus...whether or not a masjid should be built at the disputed site is no longer that important. Justice is what matters."

Others, however, feel the government has not gone about the negotiations credibly. Maulana Wahiduddin Khan of the Islamic Centre says the government ought to have done its homework before embarking on talks: "The romantic notion that Muslims should gift the land is not practical. Who is the owner and who the recipient? Besides, "gifting" away the disputed site for the construction of a temple is not possible. Under Islamic law, a mosque is waqf-i-allah, the property of god."

However, a solution can be found within Islamic law. "You must have a proper framework for negotiations. Relocation of the mosque is possible under what can be termed the 'law of necessity'. This has been done in hundreds of cases in Islamic countries. As for the distance at which it can be relocated, we can refer to the second Caliph, who said namaaz may be read or a mosque constructed 'at a stone's throw' from another place of worship," he says.

Former diplomat Hamid Ansari observes, "No one in the community has said he is not interested in discussions and negotiations. But in a negotiation, you don't start by putting your cards on the table. To start off by saying gift us the land is unrealistic and unfair. And how did Kashi and Mathura land up in the bargaining basket? The law says status quo must be maintained on all places of worship. It seems that the Shankaracharya's proposals were intended to create a sense of shock and awe." He's positive that the average Muslim will not buy the "let's surrender the land" argument. "A unilateral gesture of generosity won't work. It would convey a wrong message."

Zahid Ali Khan, editor of leading Urdu daily Siyasat, also supports the government initiative for talks but is sceptical about the outcome: "If there is a sincere effort that involves both communities, it has to be supported. In 1987, the Kanchi Shankaracharya and Muslim leaders like Ali Mian and Yunus Salim came up with a proposal for a meditation hall for all religions at the disputed site. But now positions have hardened and we'll have to find a solution to fit the times."

Dr Fakhruddin Mohammad, secretary of the Muslim Educational, Social and Cultural Organisation, says, "It's the duty of everyone to give the AIMPLB and the Kanchi Shankaracharya time and space to resolve the issue. Islam stands for peaceful co-existence. So, let the community put Ayodhya behind it and move on."

A substantial section of Muslim leaders still believes that, for practical rather than ideological reasons, only a judicial verdict can resolve the dispute. Says Maulana Margoob-ur-Rehman, Deoband vice-chancellor, "Only the court can give a permanent solution.We are bound by its verdict. So should these Hindu organisations be."

Mohammad Salim, West Bengal minister for youth welfare, agrees that the legal route is the only one which will work. "To suggest that people should make sacrifices and not go by the court verdict smacks of sabotage." Muslim Intellectual Forum convenor Feroze Mithiborwala agrees: "I'm not for negotiations because there is no guarantee that those negotiating will conduct things in an above-board way."

Prof Ahmed agrees that the absence of credible negotiators is the biggest stumbling block. "Neither the VHP nor the AIMPLB has any right to negotiate or receive the land. The consensus has to come from the average Hindu and Muslim."