The rare screening at the International Film Festival of India 2014 was almost like a historic event... 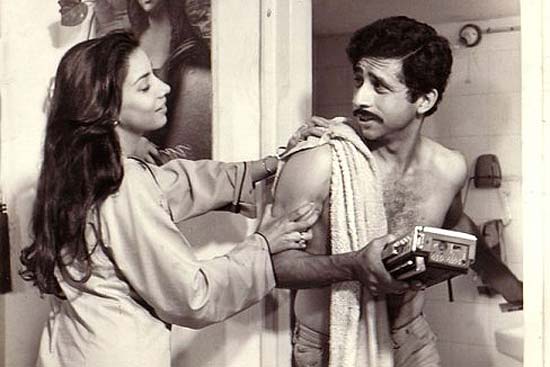 For Bollywood buffs Libaas has been a lost film. One that only existed as an audio cassette of its own dialogues and songs. The wistful cassette had some lovely melodies like Khaamosh sa afsana paani se likha hota and Seeli hawa chhoo gayi. And that unforgettable line in which Naseeruddin Shah tells Shabana Azmi in his booming voice: “Ghar mein rehti thi to ghar bore karta tha. Theatre mein rehti ho to theatre bore karta hai. Tum hamesha wahan hona chaahti ho jahan nahin ho aur jahan ho us-se kabhi santusht nahin hoti. You always want to be somewhere else than where you are and you don’t even know where you want to be.”

It was sheer nostalgia then to see this dialogue, and the rest of the cassette, finally come alive on screen. Made in 1986 Libaas had never managed to find a commercial release because of some irresoluble problems at the producers’ end. The viewers had to remain content with that rare cassette and copies of the script alone. No wonder then that the rare screening at the International Film Festival of India 2014 was almost like a historic event. And the paramount question on everyone's mind was: would the film have withstood the test of time, 28 years to be precise? It has. Despite its faded colours, lack of technical spit and polish, some abrupt scenes, and old-school narrative, it remains modern and relevant at heart. It’s more mature and evolved in delving into a crumbling man-woman relationship than many contemporary fig leaf progressive films.

The big strength is in the writing—sharp lines, everyday wit and humour, redolent lyrics. Who else can write this but Gulzar: "Pyaar mein rehte rehte pyaar ka ehsaas hi gum ho gaya". Only a Gulzar hero can tell the heroine: "Purani bhi lageen, aur nayi bhi". He expertly captures the quotidian moments in a marriage, be it trying to spread hard, frozen butter on a slice of bread or changing the washer of a tap. Set in the world of theatre it also refers to several people and plays like Hayavadan, Shantata Court Chalu Aahe, Aadhe Adhure. All in a bid to draw parallels between the staged and the real.

Most significant, however, is the filmmaker's non-judgmental tone. Shabana as Seema, the fickle, capricious, flirtatious wife of theatre director Sudhir (Naseer), who falls in love with his friend TK (Raj Babbar), could have easily been become a vamp of sorts. She doesn’t. Her unpredictability and impulsiveness are portrayed unapologetically as a part of who she is. She reminds one of the equally whimsical Maya in Ijaazat, another of Gulzar's women who could not "belong" to anyone, who was always trying to escape the humdrum, constantly in search of exhilaration. The most surprising character is that of her husband Sudhir who coaxes her into stepping out of their marriage. In a powerfully written pre-interval scene Sudhir narrates the story of his friend, Mr Mukherjee, to TK and Seema, while tangentially referencing their own predicament. You can’t put a legal stamp on relationships, he says and makes it clear that he won’t force Seema to stay with him if she doesn’t want to. “If you are not merely flirting with each other, if you are not deceiving each other, then hold each other's hand and walk out of this house," he tells TK and Seema. Perhaps, one of the most understanding, sorted man Hindi cinema has seen. Naseer breathes life into Sudhir, specially in this crucial scene. Shabana matches him with her acting chops, looks fetching and flaunts some lovely loungewear. However, Raj Babbar is hammy and feels like too obvious a replica of Amitabh Bachchan.

Do watch the film when it appears next at a film festival near you.