"All our losses in life are combined in one great loss when we die, so how could anyone dying not be sad or angry." 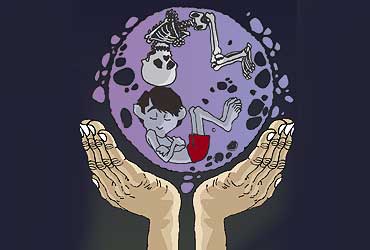 outlookindia.com
-0001-11-30T00:00:00+0553
Seeing the sheet-covered body lying on the cold stone floor, your heart skips a beat. You assume the boy is dead. But the relief is overwhelming when his father shakes 15-year-old Shyam Narasimhan from his slumber. Shyam wakes up and struggles to sit to greet his visitors. The tattered sheet drops to reveal his face and body. Your heart skips another beat.

Shyam is dying of throat cancer. The tumour in his throat has grown so big that it now distorts what was once a sweet face, one that bears a striking resemblance to his TB-stricken mother Lakshmibayi. His swollen face is lopsided. His eyes bulge. The tumour is pushing against his upper palate, affecting his hearing. His tongue is paralysed, slurring his speech. He even sleeps with a handkerchief because of the constant discharge and bleeding from his ears, nose and mouth. It is so painful that he has difficulty in swallowing. He sips liquids and powdered nutritional supplements. But he tends to vomit even that, so he is now stick-thin, skin stretched taut over his bones, a skeletal figure, totally devoid of flesh, except a cancerous mass inside his throat.

His family is poor. In their dilapidated little home, they have electricity, but don't have money to pay for it. A solitary zero-watt bulb dangles from a dirt-covered wire above Shyam. They have one 40-watt bulb, fitted only for special occasions. Their only income comes from selling off the last of Lakshmibayi's gold. Distraught at losing her only child and clearly in need of psychiatric care, she complains constantly that all her troubles in life began after her marriage to Narasimhan. He listens to her bickering with stoicism, his mind engaged in attending to Shyam's needs. Father and son are clearly devoted to each other. Narasimhan quit his job as a salesman in a cloth shop four months ago to look after his dying son full-time. The General Hospital stopped radiotherapy and discharged Shyam because he was terminally ill. Shyam had no choice but to go home and die.

That's when Deepa Muthaiya, a journalism graduate, and her team of volunteers of Chennai's Dean Foundation stepped in. They cannot save the child, but they can make death easier. Deepa is part of the Hospice movement founded in 1967 by Britain's Dame Cicely Saunders. Hospices that provide palliative (as against curative) care was introduced in Mumbai in 1986 and has now spread to several Indian cities, though, perhaps, it is most widespread in Kerala. The purpose is to make death less traumatic, less painful by easing symptoms through pain-killers and providing an environment in which the patients can die in dignity.

The involvement of Muthaiya, 41, in the hospice movement is a story of how books can transform people's lives. Several years ago, she chanced upon Sogyal Rinpoche's The Tibetan Book of Living and Dying, which focused on how important it is to live and die well, how vital it is for individuals to prepare for their death, and for the family and community to assist the dying. A peaceful death does not mean dying in one's sleep. Instead, it means attaining a peaceful frame of mind before death, which can be achieved only by calmly letting go of life and its attachments, disengaging from the world and from one's loved ones as one must inevitably journey into the hereafter. But that is invariably easier said than done. The dying need help. They are losing their whole world—their house, their work, their relationships, their body, their mind.As Sogyal Rinpoche says in his book: "All the losses we could possibly experience in life are joined together in one overwhelming loss when we die, so how could anyone dying not be sometimes sad, sometimes panicked, sometimes angry?" Hospices engage volunteers who sit with the dying, helping them cope with this loss that entails a whole range of emotions, from terror to bitterness.

After reading the book, an inspired Deepa decided this would be her calling. But she was flabbergasted by the reaction of friends and family. People were dismissive, crushing, sarcastic. "Oh, so you want to be a Mother Teresa!" they sneered. Her enthusiasm could not bloom, nipped as it was in the bud. But she carried the seed in her heart and years later, when palliative care gained recognition, she set out to fulfil her dream. In 1998 she set up the Dean Foundation.

It is still a modest effort, but a tribute to the never-say-die spirit that we, as individuals, can make a difference, provided we have the will. They have 47 dying patients under their care—victims of AIDS, cancer and other terminal diseases. The team of doctors and volunteers visit the patients' homes, provide medicines, clean ulcers, dress wounds, offer solace and counselling. The care is free. They help out in other ways too—they find jobs for surviving members or find them new homes if they are evicted. But garnering funds to keep her foundation afloat is a constant struggle.

Shyam is happy to see Deepa. He doesn't know he is going to die. Sogyal Rinpoche advises it is better to be truthful and inform the dying of their fate. "But," asks Deepa in anguish, "how do you tell a child of 15 that he is going to die?" So Shyam thinks he will get well one day. And when he does, he says, he will have long chats with his father. He longs to go back to school—he used to come first in class till illness forced him to drop out in class five, two years ago. His words are slow, halting and indistinct, but his desires are clear: "I want to go to school on a cycle. I want to play with my friends. I want to eat lots of ice-cream. I am taking all the medicines regularly so that I can get well soon."

But he won't. In a few months, Shyam will be a sheet-covered corpse on a cold stone floor.

The author can be contacted at post@anitapratap.com)