Let's Think Again About The Burqa

The Quran does prescribe purdah. That doesn't mean women should obey it. 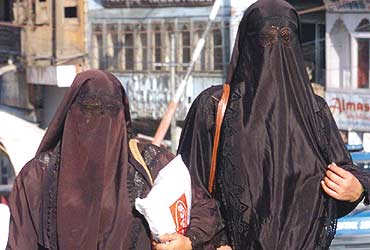 As a young girl, I used to nag her: Ma, don't you suffocate in this veil? Don't you feel all dark inside? Don't you feel breathless? Don't you feel angry? Don't you ever feel like throwing it off? My mother kept mum. She couldn't do anything about it. But I did. When I was sixteen, I was presented a burqa by one of my relatives. I threw it away.

The custom of purdah is not new. It dates back to 300 BC. The women of aristocratic Assyrian families used purdah. Ordinary women and prostitutes were not allowed purdah. In the middle ages, even Anglo-Saxon women used to cover their hair and chin and hide their faces behind a cloth or similar object. This purdah system was obviously not religious. The religious purdah is used by Catholic nuns and Mormons, though for the latter only during religious ceremonies and rituals. For Muslim women, however, such religious purdah is not limited to specific rituals but mandatory for their daily life outside the purview of religion.