The global boys are queueing up, but FDI in retail still needs to quell the Left pitch 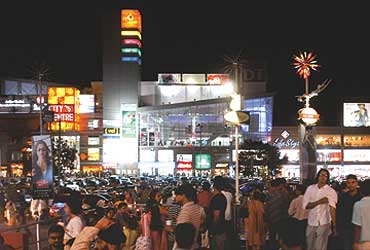 outlookindia.com
-0001-11-30T00:00:00+0553
Early this month, John Menzer, CEO of the global retail chain, Wal-Mart, was in New Delhi. In his interactions with government officials, he had a simple, key message: if India opened up its retail sector, the $288-billion company could invest huge sums here in the near future. While the bulk of the investments would be in opening new stores, it would also boost Indian exports as Wal-Mart could source more products from India.

"We have great suppliers in this market, it is our fastest growing (in terms of procurement). If we have an opportunity to bring stores into this market, we will get better knowledge and close cooperation with our suppliers, and can even accelerate the growth of Indian exports," said Menzer. Wal-Mart, which sourced textiles and accessories worth $1.2 billion last year from India through its procurement centre in Bangalore, plans to increase the figure to $1.5 billion this year.

His intentions seem clear. Like a number of other global retailers, Wal-Mart was nudging Indian policy makers to allow foreign direct investment (FDI) in the retail sector. In fact, the queue of foreigners outside the capital's Udyog Bhawan is getting impatient. For they know now that it's only a question of when, not if. These companies include known names like Wal-Mart, Tesco from the UK, and Germany's Metro. Others eyeing India's lucrative market are Chanel, UK's Marks & Spencer and MNC foodchains like Costa Coffee, Papa John and Dixy's.

Even as there's tremendous excitement among foreign retailers, the UPA government is struggling with several options in a bid to please its coalition partners. Kamal Nath, the commerce minister, was once keen on 100 per cent FDI. But seeing the opposition to the move, he's now apparently on to an "Indian formula" that will allow 49 per cent FDI and another 26 per cent by FIIs (foreign institutional investors). Whatever the final figure, Kamal Nath won't settle for less than 49 per cent for the foreign partner.

In private though, the commerce minister is still trying to push for 100 per cent FDI. In fact, the department of industrial policy and promotion, which looks at the nitty-gritties of India's FDI policy, is studying the pros and cons of allowing 100 per cent FDI in select retail areas like food and groceries. The ministry of consumer affairs is also working on a paper on organised retail that will come up before the committee of secretaries next month. The paper will look at related issues and existing laws to clear the road for FDI inflows. For example, changes might have to be made in existing acts such as the Urban Land Ceiling Act, Shops and Establishment Act, the Weights and Measures Act, the Essential Services Maintenance Act, the Agricultural Produce Marketing Committee Act and related labour laws.

One fact, however, is certain. The government is unlikely to open up the entire retail sector in one go; instead it may allow FDI in a phased manner starting with only a few segments like food and groceries, moving on to consumer goods and high-value merchandising. And it is certain that there would be severe conditions and riders including limitations in geographical areas of operation as well as obligations for sourcing and exports.

The reason: the UPA plans have met with strong opposition, especially from the Left parties. The latter contend that FDI would hurt the country's small businesses and create monopolies, apart from leading to large-scale unemployment. In a letter to the prime minister, CPI general secretary A.B. Bardhan urged the government to reconsider any such proposal. The party has also stressed that FDI in the retail sector would go against the principles of the UPA's Common Minimum Programme. The previous nda government too was unable to create a consensus among its coalition partners on this issue.It too had to scale down the FDI figure to 49 per cent, but then it lost momentum as the country went into polls.

But what's luring the global retail bigwigs to India? According to a McKinsey report, India's retail sector is pegged at $210 billion, which is expected to touch $300 billion in the next five years. Most of it is dominated by 10-12 million family-owned shops in the unorganised sector. The share of organised retail may be as low as 3 per cent. All this would change if FDI is allowed in. International rating agency Fitch predicts that penetration of organised retail could increase to about 10 per cent over the next five years. 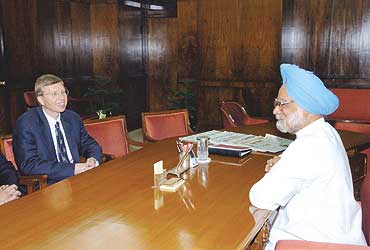 Agrees Wal-Mart's Menzer: "We want to expand our operations in India. We are ready for it. But it can be done only after the Indian government comes out with its FDI policy in the retail sector." The market buzz is that most foreign retailers have already firmed up their plans for India. Wal-Mart may have even identified cities and likely locations for its future stores and visited Indian retail stores to get a sense of retailing practices in India. Menzer expressed his interest particularly in the food and groceries sector in India where his company could bring in high-end technology. "So much agricultural produce is wasted here for lack of adequate cold chain and proper distribution and logistic network," he said.

Such aggression has led to fears that the MNC retailers could wipe out the millions of 'mom-and-pop' shops. But Arvind Singhal, chairman of retail consultancy ksa Technopak disagrees: "There is no reason why FDI should have a negative impact. Worldwide, the retail sector is the largest employer. In India, organised retail has the potential to provide direct employment to 10 million people, and another 30 million can get indirect employment. Besides, even in the US, the share of organised retail is only 40 per cent while the remaining 60 per cent is accounted for by small shops." Adds a top manager of an Indian retail chain: "Retailing caters to local needs. So, unorganised retail will always co-exist with the big chains."

According to the Planning Commission, FDI in food retailing could lead to a more efficient supply chain management system and reduce the disparity between the price consumers pay and what the farmer actually receives.

As foreigners salivate over entering the Indian market and the government tries to finalise its FDI policy, organised Indian retailers have got into the act to capture market space. The idea is to gear up for fresh competition. Large groups like Pantaloon Retail through its Big Bazaar retail chain is on an expansion spree; others like Trent and Westside, owned by the Tatas, and Shoppers' Stop, have also upped their investments. Sources indicate that the Reliance group is also putting final touches to its blueprint for entering the retail sector and start Wal-Mart-kind discount stores across the country. It is likely to open 18 such stores with an investment of about Rs 30-40 crore each. Together, the four of them may spend Rs 700-800 crore over the next few years.

All indications are that the government will announce its decision in the next few weeks. Going by the mood of the officials and the push being given to retail FDI by Kamal Nath, it's likely to open a few doors for the entry of foreign retailers. So, put a hold on your purchases and wait for the next season.