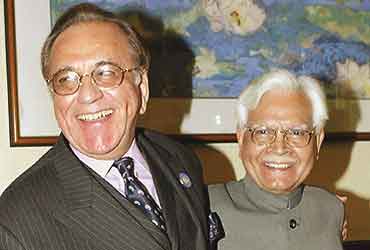 outlookindia.com
-0001-11-30T00:00:00+0553
It was a return to classic diplomacy: deliberate, multi-tiered, formally choreographed and enacted. But the signals were positive, and comforting. And for all the hair-splitting over detail, you couldn't miss the momentousness of it all. After all, when the India-Pakistan expert-level talks on nuclear CBMs were initiated on June 19-20, it was the first time there had been any movement on this front since 1999, when former PM A.B. Vajpayee's Lahore visit turned the intention into an agreement.

Days before the machinery clanged into action at Hyderabad House in New Delhi, national security advisor J.N. Dixit and his Pakistani counterpart Tariq Aziz had had an informal conversation—exploring ways in which they thought the two countries ought to conduct the nuclear dialogue. Their focus: developing measures that were at once assuring to New Delhi and Islamabad as well as to the international community, more so the latter with its deep worries about the subcontinent teetering on the edge of a "nuclear flashpoint". They resolved to transmit signals that would effectively squash the flashpoint theory. Dixit articulated broad concepts he thought could work; which he and Aziz then left to the two delegations to work out.

It was this one-on-one that steered the two delegations as they came to Hyderabad House with their respective proposals. These were first discussed on June 21 morning, then at the dinner the two teams had at the Oberoi, and finally on June 22 morning. In the end came a joint statement, one that combined a formally stated conceptual shift with a clutch of concrete proposals. 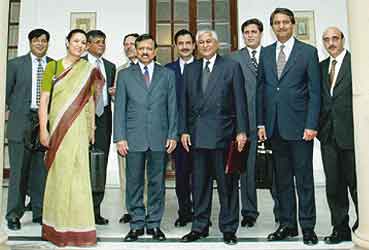 Beyond everything else, both India and Pakistan decided for the first time to explicitly recognise the nuclear capability of each other as well as state that the possession of nuclear weapons constituted a factor of stability. Further, they decided to work towards "strategic stability". What the elements of this strategic stability are hasn't been made clear yet. The two sides also reiterated a moratorium on conducting further nuclear tests, "unless in exercise of national sovereignty, it decides that extraordinary events have jeopardised its supreme interests." New Delhi had given such a commitment post-Pokhran II in May 1998 and reaffirmed it during then US president Bill Clinton's visit in 2000.

Is the joint statement exceptional, a step forward? First, diplomats say, Pakistan has formally agreed to eschew its strategy of promoting the idea that the subcontinent is a nuclear flashpoint. It had often raised this bogey in the past to scare the Big Powers into getting embroiled in the Kashmir issue. Diplomats who participated in the discussion say the change of heart could be attributed solely to the erosion in Pakistan's credibility following the unravelling of scientist A.Q. Khan's proliferation activities and the general belief that he could not have undertaken the activity without the backing of the establishment there.

Some say India's decision to recognise Pakistan's nuclear capability—and its perceived stabilising effect—has effectively "whitewashed" its dubious procurement of nuclear weapons, the Chinese role in it and also the reckless proliferation activity Islamabad undertook through the '90s. This could have serious consequences. For instance, India cannot now mount pressure on Pakistan for its nuclear misdemeanours.

Other officials, however, say the policy is pragmatic. As one diplomat points out, "We are living with the current reality. We reached a pragmatic decision without the usual breastbeating. The genie is out of the bottle, we have no means of putting it back in there, we have to deal with it. There is no international instrument to browbeat Pakistan to roll back. " Officials also say the joint statement, anyway, does not "endorse the way Pakistan procured its capability or proliferated it to others like Libya, North Korea or Iran".

Meanwhile, as a 'concrete' step, there was an agreement on installing a hotline between the foreign secretaries of the two countries. Such a hotline, say sources, did exist between 1991 and 1994, when Dixit was himself the foreign secretary. The line subsequently fell into disuse and neglect, eventually becoming dysfunctional. It'll now be reactivated.

They also decided that the existing hotline between the DGMOs (the Directorate Generals of Military Operations) would be "upgraded, dedicated and secured". Ambiguity exists on what this means. For instance, former army officials with some experience in dealing with the hotline claim the existing line between the DGMOs is secure enough and works as well as it should. So, what's this upgradation fuss all about, they ask. Diplomats, however, insist the current line is not secure, it is not dedicated (that is, can't only be used by the DGMO), that it is not always reliable in real time. "In an emergency," a diplomat quips, "you simply cannot afford to deal with a message that says, all lines on this route are busy, please try after some time!" Sources say upgradation also means the process of contacting the person at the other end of the line would be faster and the frequency of their interaction would be increased.

It was also decided to take the process of notification of missile testing forward. Though India and Pakistan have "by and large" kept each other informed in advance about missile launches, they haven't always done this. Even recently, when Pakistan test-fired two missiles, prior notice was inadequate, say diplomats. The two delegations thought a prior and adequate notice would render redundant political signalling that is inherent in missile flight-testing. (Such launches are as much about testing as about sending a message to the rival). The Indian side handed over a draft spelling out technical parameters New Delhi thought should constitute advance notification of missile launches. Among other things, it should include, say sources, the time and place of launch and the expected area of impact.

Among those who feel the nuclear CBMs are a case of window-dressing and their significance exaggerated are also western diplomats. They wonder whether the joint statement diminishes the animosities between two countries who have created nuclear scares in the past, and also about the manner in which the intentions will be realised. For instance, they feel, strategic stability can't be achieved through mere bland statements. Diplomats point out that even in the American-Soviet context, it took years—and several rounds—of talks to usher in stability.

But wait, last week's joint statement isn't the last. Sources say the meeting of foreign ministers Khurshid M. Kasuri and Natwar Singh in Qingdao, China, has set a positive tone for the coming week. And as the foreign secretaries of the two countries meet on June 27-28 to discuss Kashmir, expectations are that yet another document will be issued to signal the productive engagement between them.