What if we did defy the US? Will it impose sanctions on us? Will US Marines land on Raisina Hill and arrest George Fernandes? 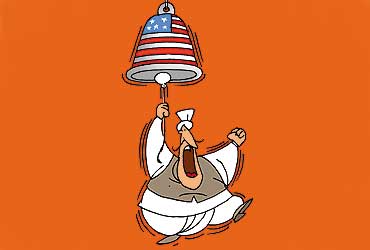 outlookindia.com
-0001-11-30T00:00:00+0553
At one of Robert Blackwill's more amiable Round Table dinners, the American ambassador to Lutyens' Delhi spoke with some passion on how India and the United States were like Siamese twins in their commitment to fight terrorism. "The Bush administration is the best US government India could hope for. If we fail you in your fight against terrorism you have good reason to complain, but we will not fail you," he declared grandly. The ambassador then went on to detail the kind of pressure Bush would put on Musharraf to force the General to redeem his pledge of cleaning up his country. He left his guests in little doubt that despite Pakistan's critical assistance in Afghanistan, the US would cut no deals with Musharraf over Kashmir.

The notion that Musharraf could dare or deceive the US, according to Blackwill, was laughable. In return,Mr Blackwill required complete no-questions-asked Indian support for President Bush's exertions to root out terror from places as various as North Korea, Iran, Iraq and Syria. I was not, I hasten to add, exclusively privileged to hear the ambassador's views on India's concerns in Kashmir, he repeated the reassurance endlessly at his Round Table.

I was reminded of Blackwill's declaration as this country debated with increasing rage and frustration the narrowing range of India's options. The government appeared ready and willing for effective action, the Indian public was ready and willing, the political class favoured retaliation, the defence forces required only clear instructions. For once, there existed rare unanimity in the country.

Only one impediment stood in the way. The United States. It wanted us to show more restraint, wanted us to give Musharraf more time, wanted us to recognise that the General in Islamabad was badly cornered and therefore vulnerable, wanted us to appreciate that Musharraf was India's best friend in Pakistan. They sympathised with our grief, understood our compulsions, condemned in "the strongest possible terms" the "outrages", yet they requested, urged and even threatened India to continue taking the serial cross-border punishment with civilisational stoicism.

I don't think I have misread the signs. Currently, the overwhelming view in the country is that without the consent of Uncle Sam, India should not, indeed could not, respond militarily. The prospect of the world's largest democracy acting independently—that is, against US wishes—is inconceivable. Sober, wise and experienced policy-makers insist the very idea of an offensive strike without prior approval of George Bush, Colin Powell and Condoleeza Rice is fanciful.

Thus, all our energies and efforts should be directed towards convincing the White House that what is okay for George Bush and Ariel Sharon should be okay for A.B. Vajpayee. The hypocrisy of the US position on fighting terror in Kashmir is so brazen that to dwell on it is to merely repeat the self-evident.

I am not naive or simple-minded enough to underestimate the influence or power of the United States. Not a leaf moves on our planet without permission from the sole superpower. In our own tussle with Pakistan, the US capacity—as demonstrated during Kargil—to shove and push Islamabad is huge. No one understands that better than President Musharraf. He turned tail with lightning speed when Bush announced after 9/11: "You are with us or against us."

It is not as if we are moving into uncharted territory.In 1971, Indira Gandhi successfully challenged Richard Nixon's infamous "tilt" even as the Seventh Fleet sniffed ominously around our shores. Why, just four years ago, the BJP government (which has ministers who flaunt their proximity to the US as a badge of honour) covertly exploded a bomb much to the displeasure of the world's only superpower. To use the piquant phrase, the heavens did not fall. (By the way, where are the votaries of the swadeshi bomb? Do they realise their folly now as Pakistan taunts us with "first strike", making a laughing stock of our 3 to 1 superiority in conventional arms?)

Will the Bush administration impose punitive sanctions on us if the option we decide angers them? Will US Marines land on Raisina Hill and arrest George Fernandes? Naturally, some deft diplomacy will be needed and we can expect a long line of US officials pounding the doors of South Block. Remember, India and the US are, or so the present American President tells us, "natural allies". The world's largest and second largest democracies can publicly quarrel, can publicly disagree, but beyond verbal reprimand there is not much the Bush administration can do. Who knows we might even go up in its esteem.

There is, of course, one area where help will be required. India and Pakistan are two nuclear states and one of those states has threatened to press the button if its "survival is in question". Fortunately, the United States has as much at stake as India to ensure that Pakistan does nothing globally catastrophic. Even our estranged neighbour, despite his bluff and bluster, is unlikely to go all the way.

War-mongering? No. I am not pleading for a full-scale war. Neither do I necessarily advocate a "reverse Kargil" or any other variation. I am suggesting that for the world's largest democracy with a legitimate grievance, this paranoid fear of the United States is both shameful and humiliating.

Finally, the option we adopt could range from dialogue resumption, to diplomatic offensive, to economic squeeze, to war. But that option should be of our choosing. If the Americans don't like it, that's their problem.