Let Them Have Cake

Showcase Modern Breads reports sick, but it's actually on the road to recovery 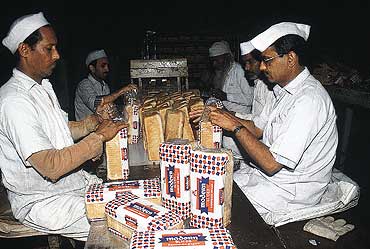 outlookindia.com
-0001-11-30T00:00:00+0553
Barely hours before he left for Malaysia, Prime Minister Atal Behari Vajpayee had a brief meeting with representatives of the five big trade unions. The subject was—you guessed it—disinvestment. This time, the unions thought, they had a foolproof weapon in their arsenal: Modern Foods, the first psu off the block for a paltry Rs 105 crore, had found its way to the Board for Industrial and Financial Reconstruction (bifr) only a year after sell-off!

When the news broke a month ago, many had prepared to write an elegy to India's disinvestment efforts. Under the law, a bifr referral becomes inevitable once a company's accumulated losses cross half of its net worth. As outsiders tittered about the country managing to sell "only a bakery" in 10 years, Indians worried: if Modern Foods had turned sick, was India's first effort at psu privatisation a dismal failure?

Far from it. In fact, as Outlook discovered, the bakery may turn out to be a pioneering instance of privatisation success. For one, Hindustan Lever Ltd (hll), the new owners, reported Modern to the bifr because of a legal necessity; it hasn't sought any money or a rehabilitation package. For another, 15 months after the Rs 105-crore acquisition and a fresh infusion of Rs 20 crore in 14 bread manufacturing units, a 100-town-strong distribution network, 60,000 outlets and 22 franchise units, the company's business indicators have turned. For the better.

Sales is the biggest proof of the pudding. The decline in sales has been checked. Not only that, in January-March 2001, sales grew by 80 per cent over that in the corresponding period of the last fiscal. The highest growth was in Hyderabad (88 per cent), followed by Delhi (63 per cent), Mumbai (37 per cent) and Ahmedabad (36 per cent). "Formulations have been improved by incorporating additional ingredients. A premium bread—Milk Classic—has been launched in Delhi and Mumbai, and staff salaries hiked significantly," says hll director (foods) Gunender Kapur.

Fear is the key to the unions' dissent. "Yes, they did hike salaries and have increased sales. But till date, the management has not given in writing that the labour force will not be touched," exclaims A. D. Nagpal, general secretary of the All India Modern Bakeries Workers Federation and national secretary of the Hind Mazdoor Sabha (hms).The staff worry that a meeting on May 17 between the management and labour representatives in Delhi will be followed by a vrs scheme and closure of the units in Kanpur, Ranchi, Faridabad, Jaipur and two more in Delhi. "Whenever hll acquires companies, they implement vrs," complains Nagpal. Another trigger for the fear—three senior employees, Modern Food Employees Union secretary Govind Yadav, treasurer V.K. Narang and organisational secretary Ganesh Thakur, were suspended for opposing privatisation. To which the management replies that the step had become necessary since the trio was disrupting work and had manhandled a colleague.

Modern's management also allays the retrenchment fear. So far, none has been retrenched or redeployed significantly. Explains Kapur: "There has been no change in the policy regarding employment/deployment of casual or contract labour. There has been no addition in the contract labour force after the takeover; the past policies are still in force. The need for deployment of the workforce, given the requirement for flexibility, has been recorded in the recent settlement with the employees, which is effective till January 1, 2002."

Financial analysts agree Modern is on the path of relatively safe growth. Its 1998-99 turnover was Rs 160 crore, which dropped to Rs 151 crore in 1999-2000, most of the decline taking place in the second half. But in 2000-01, turnover jumped to Rs 168 crore, with a significant improvement in bread sales. Losses were Rs 48 crore in 1999-2000 but are now down sharply to Rs 20 crore. The figure would have been even lower but for an expenditure of Rs 9 crore on plant repairs, improvised formulations and brand-building, and of Rs 1 crore on wage revision.

But unions are unconvinced. "Why was the company referred to the bifr then?" asks hms' R.A. Mital, who attended the meeting with the PM. He cites an old anz Investment Bank report that said Modern's net worth would be eroded by nearly 33 per cent between 1998 and 2000. Explains Kapur: "We've informed the bifr because of a requirement under section 15 of the Sick Industrial Companies Act, as the company became technically sick in January 2001. Failure to do so would have made us liable to criminal prosecution." But in the bifr application, Modern hasn't sought aid. Instead, it says it plans to make its net worth positive within a reasonable period of time, on its own, and there was no question of its inability to do so.

Food is now a key thrust area for hll. With the benefit of hindsight, it can be easily concluded that behind the Modern Foods acquisition lies a two-pronged strategy. It was meant to come in handy for hll to move up the value chain of wheat, coupled with an access to a huge daily distribution network perceived by many as only second to those owned by the two soft drinks majors. Modern Foods was the portal to hll's ambitious pan-Indian programme and the management was—and still is—determined to turn it around.

hll loves shopping. And it shops big. Over time, they have emerged as masters of the turnaround game. In the last decade, they have acquired a dozen brands ranging from big ones like those owned by Tata's Tomco and Lakme, Vijay Mallya's Kissan and Ravi Ghai's Kwality to relative upstarts like Cococare. Modern Foods was the third major acquisition for hll after Keki Dadiseth took over as chairman and managing director in 1995. And it could only go the way of its predecessors, believe hll sources.

That was the brief given to Modern Foods MD Peter Selvarajan. One, to implement Dadiseth's vision and morph Modern into an efficient, nimble and productive company. Two, with Britannia and Nestle as strong rivals in the market, he had to consolidate hll's food thrust by expanding the product portfolio and, subsequently, boost the Modern brand. With planned synergies between Kissan Annapurna Popular Foods, which makes wheat products and salt, and Modern Foods, which makes ready-to-eat food like breads and cakes, hll is gunning for an even stronger presence in the foods business. Says an hll spokesperson: "Modern is very strong in cakes in the southern market and we are further consolidating it. Modern's r&d is working very closely with hll's foods r&d in various areas, which will result in benefits like cost-reduction, quality improvement and new products for Modern. And even if hll launches ready-to-eat chapatis in the future, they will not have any cannibalising effect on Modern—people will still have bread."

Right now, then, the future health of Modern Foods is an important ingredient in the new hll winning formula. India's first disinvestment gambit seems to be working out fine.