"Let Them Grow Opium In UP" 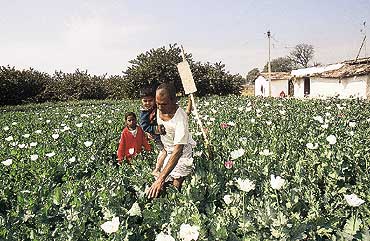 outlookindia.com
-0001-11-30T00:00:00+0553
Madhya Pradesh chief minister Digvijay Singh has set the cat among the pigeons—he's written to the Centre seeking a blanket ban on opium cultivation in his state to check growing drug abuse. He's still waiting for a response from New Delhi.

In the meantime, more than 60,000 farmers in the state are busy growing opium on 16,000 hectares of land in Mandsaur, Ratlam and the Neemuch districts of the state. The state enjoys the dubious distinction of accounting for 57 per cent of India's annual opium production. Uttar Pradesh and Rajasthan pitch in for the rest. While illegal trade has opened the doors of prosperity for many, the MP's total legitimate export is only worth $40 million annually. Much of the produce finds its way to illicit markets where it is sold at almost ten times its official price. A well-organised racket, the trade is run by a powerful mafia with political patronage.

What is the motive behind the chief minister's latest move? Is he trying to fix his rivals or does it open a new front with the Centre? Whatever it may be, the latest call only threatens to destabilise a well-oiled and time-tested network. In an exclusive interview to K.S. Shaini, Digvijay Singh reiterates his resolve to rid the state of the menace. Excerpts.

Why do you want the Centre to ban opium farming?
I want New Delhi to impose this ban because opium cultivation is only doing more harm than any good—it is ruining our youngsters who are getting addicted to the drug and its other chemical derivates like heroin and smack (brown sugar). Also, if you carefully look at the economics of opium farming, it is very difficult to make money by honest means. Farmers can make money only if they sell it illegally.

Do you want the ban to be imposed only in Madhya Pradesh or throughout the country?
It should preferably be banned all over the country but I am very particular that it is banned in this state.

But isn't opium useful for manufacturing many medicines? Shouldn't it be reason enough for continuing with its production?
But why should Madhya Pradesh bear the brunt for this? Let someone else produce that. Let them produce it in Rajasthan, Haryana, Punjab or UP. I wouldn't tolerate it if my boys and girls are hooked.

Do you have any figures of the opium sold in the grey market?
No. I don't know.

Once the ban comes into effect, do you think the farmers can still earn as much by growing crops other than opium?
Yes. They can earn much more by growing cash crops or by switching to horticulture.

But growing opium is extremely remunerative.
Only when it is sold in the black market. Otherwise, the earnings are not as fantastic as is often projected.

What about the revenue loss to the government?
I do not think there would be any revenue loss. We are not interested in this trade anymore.

Does the Centre share any income with the state?
I am not aware of any such arrangement. Even if there is any, it will be very marginal. We earn something on doda chura (part of the opium flower which is useful for medical purposes). The bottomline is that the entire population of the state is getting addicted. This is something which cannot be tolerated. Even if a huge revenue loss was involved, my stand would still be the same.

Is it true that these farmers and traders are a prime source of funding for political parties?
Oh no.There is no such thing happening.

Is there any alternative to a total ban?
I don't think so. But this is my personal view. Not of the Congress party or anyone else. All efforts to control the illegal trade have failed.

Has the state government done anything to persuade the farmers to give up growing opium?
There is so much money in its illegal trade that it is very difficult to make them give it up voluntarily. The lure of easy money is difficult to resist.

But instead of a total ban, can't you crack down on the illegal market?
It is difficult to identify small carriers. You can carry opium worth a lakh of rupees in your pocket. Its more refined forms are even easier to hide. There are practical difficulties involved. Moreover, the area where opium is grown is very big.