One year later, Balco workers are happy, production is on track, even Ajit Jogi's smiling 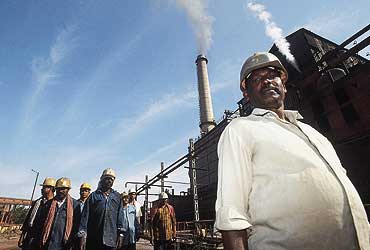 One year after the Centre's first big-ticket privatisation (divesting 51 per cent of Balco for $125 million or Rs 551.5 crore to the London-based Anil Aggarwal's Sterlite Industries), it's this very positive attitude of the workers that's helping the aluminium maker sharpen its nails in the stiff competition with the other two major producers of the metal—the Kumarmangalam Birla group's Hindalco with 2,42,000 tonnes, and the state-owned National Aluminium (Nalco) with 2,30,000 tonnes. By quadrupling its annual capacity to 1,30,000 tonnes, Balco has jumped to third place—the ultimate plan is to reach four lakh tonnes. (India is now almost self-sufficient in aluminium with domestic production of nearly 6,18,000 tonnes a year).

The other proof of Balco's bounding recovery from crisis is the beaming face of Chhattisgarh Chief Minister Ajit Jogi, who had made Balco Issue No. 1 when he took over the reins of the newly carved out state. In a head-on political confrontation, Jogi firmly sided with the workers in the privatisation controversy, contesting the Centre's valuation of the company, its land transfer deed and other issues that culminated in the long strike by the workers. The latter returned to work only in June but the controversy dragged on till December when the Supreme Court upheld the sale, chided Jogi for obstructing the deal and firmly excused itself from economic decisions by the government.