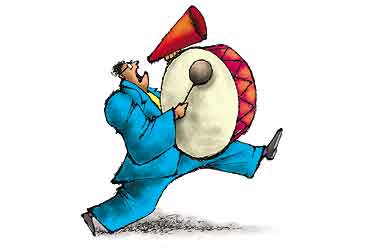 outlookindia.com
-0001-11-30T00:00:00+0553
In retrospect, it was really Hema, Jaya, Rekha and Sushma who did it. Marked a decisive shift in the language of advertising, that is. Before this formidable quartet got to work for Nirma, advertising was still largely the Art Orphanage, providing commercial sanctuary for aspiring or failed artists. The lingua franca was English and wordy flourish was the style in vogue. All brands sought to be upmarket and premium and the advertising was suitably class conscious. The local brands were downmarket and were condemned to a tinny transistor existence from where there was no escape. The prominent advertising of the day created an illusory world of escape with campaigns like Come Alive with Nescafe, Live Life Kingsize (Four Square Kings) and Campa Cola creating a world full of Beautiful People Living Gorgeously All The Time.

It was a time of restraint; ours was a society that had made its peace with economic immobility. We could squeeze more life out of a transistor, carry seven people on a Bajaj Chetak, and make trousers stretch over three generations. We lived in a world of Robin dignity and Rin jealousy; the former made our yellowed shirts a sullen shade of almost-white, while the latter told us that in a world without any hope of new shirts, cleanliness translated into potent social power. For social class was everything; even our cigarettes were advertised not as proof of masculinity but as signs dangling with the nonchalance of good breeding. If the Marlboro man prowled the wilderness simmering with barely contained masculinity, the Wills Filter man simpered while reading a Polish Joke book with his short-haired, well-bred wife.

Then came Nirma and blew a hole in the traditional class divide. Its advertising had the musical complexity of an arithmetical pahada and its message the sophistication of an election poster. It allowed millions of Indian housewives to move from a world of ferocious scrubbing to one of relaxed rinsing. And it backed this simple formula with an unbelievably large advertising budget and succeeded in causing serious damage to India's reigning marketing deity, Hindustan Lever. At the same time brands like Vimal and Rasna bristled with the energy of the Indian entrepreneur and helped make the advertising discourse more popular and rooted. The growing self-confidence of the Indian consumer found reflection in the affirmation provided by the Hamara Bajaj & the VIP campaigns, both of which did to Indian advertising what Hrishikesh Mukherji did to Hindi cinema—make us fall in love with an idealised view of 'our way of life'.

The 1990s saw the first real whiff of liberalisation and advertising helped document the spiralling ambitions of an emerging India. The Pepsi launch commercial with its orgasmic build-up and the subsequent release signified the letting go of the pent-up restraint of decades. Kama Sutra took the orgasmic theme a little more literally and made us aware that condoms were to be used for the purposes of sex and not against it as Nirodh had always made us believe. Then came the Cadbury's Dairy Milk commercial which allowed us to participate vicariously in the uninhibited unmindful-of-consequences dance of its protagonist.

The 1990s helped gradually dismantle the instinctive control that we exercised on our desires. Advertising photography made the promise of consumption more luscious, with the use of colour and slow motion highlighting the languid pleasures on display. As a society, we began to rediscover our senses and began to explore new tastes, textures and colours. The advent of satellite television completely changed the nature of advertising. From the reign of the Print Privileged where education and breeding defined hierarchy, we moved to the era of the Image Enabled, where access became much more democratic.The television image was transient, multiple and created a sense of the perpetual present. The viewer was in charge and Aishwarya Rai was always a click away. The popular became legitimate, the senses sought gratification and the need for entertainment became paramount. 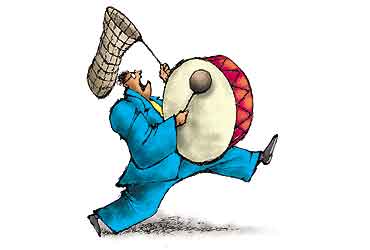 The last few years have seen advertising that responds to these changed needs. The popular has become mainstream, and the local idiom rules. Whether it is the Coke farmer, Fevicol carpenter or the Alpenliebe grandmother, the rustic is now embraced by advertisers. Coke is thanda and Cadbury's is meetha. Today's advertising speaks to people as they are in a language they actually speak. Aspirations are still important, but now these are within reach, at least for parts of urban India.

The need for entertainment drives much of advertising today. Humour is the preferred mode of communication and the message has become less obvious. Celebrities are used because they help make brands cinematic; the true power of celebrities lies not in their credibility as endorsers but in their performance as entertainers. Celebrities magnify the promise of consumption; in a world where the consumer today believes in the magical transformation of her life, celebrities represent the alchemic power of brands.

The most common advertising promise of the day is 'Live Life Fully'; all kinds of products ranging from insurance and cosmetics to beverages and apparel use some version of this theme. It is easy to see why this strikes a chord; from a time when we saw life as a condition to be undergone often with gritted teeth, today we see life as an arena which we must fill with as much pleasure as we can.

Advertising today also speaks to the newly discovered sense of social and economic mobility. Fair & Lovely today connects fairness not with snaring an accomplished groom but with succeeding in a desirable career. Kellogg's advertises itself as a mental tonic while Intel sells the computer as a way out of the circumstances one is born in.

The future is likely to see the emergence of two new kinds of consumers. We are likely to see a savvier top-end consumer whose growing comfort with the once-new categories will see him seek a more sophisticated level of branding which can serve as an identity badge. The excitement will shift from acquiring new categories of products to those brands that best reflect one's desired self-image.

The other consumer segment to emerge will be the entry of those who are currently just beyond the ambit of consumption. This is a class whose motivations are really not understood by the advertising industry and will perhaps mark a fresh discontinuity in the advertising discourse. As the India Shining campaign has taught us, Electorate India thinks very differently from Market India.

(Santosh Desai is the president of McCann Erickson.)