Lessons He Won't Be Giving Anymore 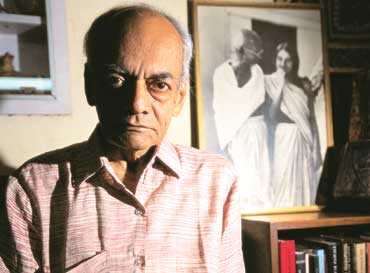 "Sharada Prasadji, do you need a ride?" The offer came through the window of a white Ambassador car. Place: the road leading from Rashtrapati Bhavan to Vijay Chowk in New Delhi. He was walking home. The occupant of the car: a lady who had just been sworn in prime minister of India. "Get in. I'll get dropped at home and then have you dropped at yours."

There was a driver and a security guard in the front. Indira Gandhi and her information advisor sat in the back. No cavalcade, no fuss. They reached the prime minister's home on Safdarjang Road. The security guard got down to open the gate. The car drove into the portico. But as it turned out, there was no one home to receive a newly sworn in prime minister. Sharada Prasad went around the house to call a servant. Mrs Gandhi stood in front of the door and kept clapping, "Arrey, koi hai?"

And so began Sharada Prasad's memorable tenure at the Prime Minister's Office (PMO), as Indira Gandhi's spokesperson and speech-writer. This was one of the innumerable such anecdotes Sharada Prasad would regale you with if he was in the mood. Those days were different, he would often say, with a tinge of sadness.

Why don't you write your autobiography with all these stories, I asked him on several occasions. Indeed, everyone who knew him asked him that question. In response, he finally wrote a newspaper column entitled, 'The Book I Won't Be Writing'. That became the title of a volume putting together his newspaper columns.

Sharada Prasad was a unique occupant of the PMO. There simply has never been another like him. He was not just a learned man, a creative editor and an outstanding speech-writer. He was an institution-builder. He was a renaissance man.

Anyone who could make the house journal of the Planning Commission sell had to be a smart editor! He attracted talent to Yojana and became part of a circle of highly talented economists who manned the commission in those days. His 'lunch club' colleagues, who became life-long friends, included the likes of Jagdish Bhagwati, B.S. Minhas, A. Vaidyanathan and T.N. Srinivasan.

He helped build the Indian Institute of Mass Communication and the National Institute of Design. He was passionately committed to the work of the Indira Gandhi Memorial Trust. His friends naturally included eminent editors and public personalities. But he also had among his circle prominent writers, scholars, artists and scientists.

I first met Sharada Prasad after my marriage. He was family for my wife, having been her father's colleague in the Planning Commission and also their neighbour in Delhi's Patel Nagar. One of the earliest stories I heard from my wife when we first met was how she, at the age of five, walked along with her parents, and with Sharada Prasad, his wife Kamalamma and their sons all the way from Patel Nagar to Teen Murti House to pay their respects to the body of Prime Minister Jawaharlal Nehru in the heat of May 1964.

In 1990, when I moved from Hyderabad to New Delhi to join The Economic Times I went and met Sharada Prasad for guidance. I was entering a new profession that he was familiar with. What advice did he have for me? Write good English, he told me. Journalism is not just about facts. It is about the quality of writing. He gave me a copy of The New Statesman with an essay by the famous editor Paul Johnson, urging editors to read books!

On the day I joined the PMO, to sit in the room he used to sit in and hold the title he had adorned with such great distinction for so many years, the first thing I did after completing my joining formalities was to drive to his DDA flat in Punjabi Bagh. He was already frail by then. I spent two hours imbibing all his advice.

"It is a different world you will have to deal with," he reminded me. In his time he would keep in regular touch with only five senior journalists—from The Times of India, The Indian Express, The Hindustan Times, The Hindu and The Statesman. "You cannot afford that luxury. Now there are far too many journalists; you have to be in touch with them. And television has its own rhythm."

"Deal directly with PM," he instructed me, in his soft but firm voice. "The civil servants will not like it. But you have to tell Manmohan that you will only deal with him. Rank and designation are not important in the PMO. Your access to the PM is what counts. If you have to be effective, you must have 24-hour access. Otherwise you will not be effective."

His third mantra was: "Make sure the PM compliments a journalist or editor if he is happy with some column or editorial." Press conferences are important, he said to me. "But these days prime ministers shy away. Neither Narasimha Rao nor Vajpayee addressed any national press conference. Make a list of all the likely questions that you think the media will ask the PM. Always keep him briefed on what the media may want to know from him."

He went on. For two hours I sat in his small, cramped flat, with his wife Kamalamma making tea, and heard him give advice. Kamalamma is a great personality in her own right. They met as artistes who performed the Yakshagana. She had her own views on all subjects. But as I left their flat that night she almost whispered into my ears, "Now you will have to keep secrets. Shourie (as she and all those close to Sharada Prasad called him) would never tell me anything. On the night Emergency was declared, he left home after dinner saying he had some urgent work. I heard about the Emergency on All India Radio!"

My closest association with Sharada Prasad was not during my PMO days. Rather, it was during the years that I was the editorial page editor of The Times of India. He would regularly call me with suggestions and comments. He would call to say he liked something, or to say he did not like something. My only regret was that he did not begin his columns during the period when I was with The Times of India. It was only after I left that newspaper that he finally decided to start a regular column and he did that for The Asian Age. I would often call him to say I liked a particular column of his, and he would say in his typically nonchalant way, in that soft tone of his, "Good!"

There are many things that I will cherish from my association with him. But there is a special gift he gave me that I must publicly acknowledge. The year he turned 80, he called me one day and said that for 50 years he had written the section on India for Encyclopaedia Britannica. He was now too old to keep track of what was happening in the country. "Will you please take this responsibility from me. I have asked the editors at Britannica to contact you." I was excited and exhilarated. And humbled. I know I will not write this for the next 50 years, but every year when I do, I wonder what Sharada Prasad would have written. And how.

There was one more aspect to him that made him unique. After those 16 years in the most powerful PMO of post-Independence India, and after years of association with so many institutions and eminent persons, when it came to his calling it a day, Sharada Prasad retired to a small, cramped two-bedroom DDA flat in Delhi's Punjabi Bagh.

So many of those who had walked those corridors of power with far lesser distinction and imprint on national life had repaired to palatial homes and grand lifestyles. Sharada Prasad, the man who was walking home from Rashtrapati Bhavan after his boss was sworn in prime minister, who wrote great speeches for a great prime minister, who built institutions and was admired by world-famous writers and artists, spent almost the last two decades of his life in a small DDA flat, surrounded only by books and photographs of a distant, but glorious past.