As an observer of cricket, Waugh shows the same depth that made him one of the finest batsmen. He will cover the World Cup exclusively for Outlook. 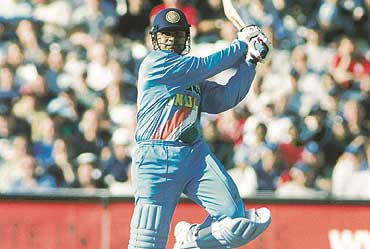 outlookindia.com
-0001-11-30T00:00:00+0553
Over the last couple of years, most of India's memorable wins have come off the batsman's blade. The deep, distinguished batting line-up has piled up big targets or overhauled hitherto insurmountable ones to grant India famous wins. Sadly, the same batting line-up was completely out of sorts in New Zealand. Captain Ganguly, the reliable Dravid, and even the redoubtable Tendulkar, had no answers on pitches that were lively, but in the one-dayers, rarely treacherous. The failure could not have come at a worse time. But is there cause to worry about India's batting at the World Cup? I think not.

The World Cup sees teams training, strategising and preparing themselves like no single series or tour does. Every participating side has a support staff that works overtime to get the players in superb physical condition, coaches and captains work overtime on the mental side of the preparation, and the players themselves know this is the one tournament in which a good performance will be remembered for a long time to come.

The pitches in New Zealand left even the home side looking uncomfortable. So I don't think coach John Wright or the senior Indian players should really waste time on post-mortems. Instead, they should be thankful that a few chinks in their armour were exposed well before the Cup while there was still time to sort them out. Also, every report emerging from South Africa suggests that pitches are being prepared for the tournament with an eye on spectator preferences—and viewers the world over would like nothing better than some big run chases. Result: expect flat batsman-friendly tracks with tons of runs. The naysayers will still be fretting about whether the Gangulys, Sehwags and Kaifs will be able to cope with the extra bounce. But that is an area where the New Zealand experience might help. Coach Wright must have sat down with each of the batsmen in front of a computer and shown them where they are going wrong. They had a few weeks to set things right, and it is enough for any pro to sort out his problems. The Indian team toured South Africa only last year, and most of the batsmen had at least one decent knock in that series. Ganguly scored a couple of 100s in the one-day competition, Tendulkar also had a couple of tons under his belt, while Virender Sehwag announced his arrival with a century on Test debut.

The biggest advantage the Indians possess is the presence of a few guys who enjoy the big games—Kaif and Yuvraj showed that in the NatWest finals last year, while Sehwag played some remarkable cricket during the icc Champions Trophy.

This must be a huge relief, and a challenge, for Sachin Tendulkar, who used to carry a big burden till last year. Relief because he now knows that there are others in the eleven who are capable of doing the job. It'd be challenging because he'd still like to prove that he is the premier batsman in the side. The only batsman I do worry a little about is Dravid. No, I'm not doubting his capability. Just that the added burden of wicket-keeping might take its toll on him in a tournament as long and as taxing as the World Cup. There is a reserve keeper, Parthiv Patel, but it is obvious that for the balance of the team, the captain would look to Dravid to keep in all the big games. I'm also a little surprised that a batsman of the calibre of V.V.S. Laxman has not found a seat in the flight to Jo'burg. He is a match-winner who has scored runs on a variety of surfaces against the best opposition. True, he is no gazelle on the field, but he is not leaden-footed either. Laxman is a guy who can really turn games around, and once he is in, he is very very tough to dismiss.

The Indian batting has depth and experience, but I hope they will not rue the decision to leave Laxman behind.

Scarred, But Not Out