Lessons From A Tea Shop 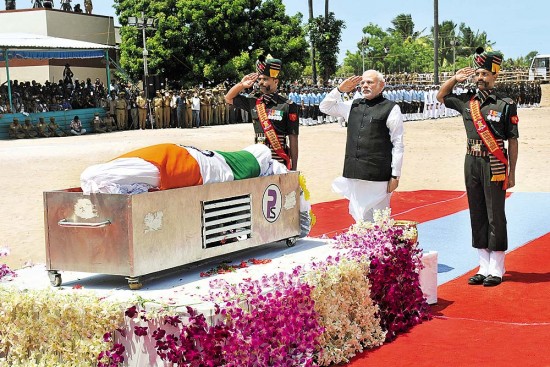 President A.P.J. Abdul Kalam was immersed in work till his last day. He was in Shillong on July 27, giving a speech to IIM students, when he suddenly collapsed. Here are exclusive excerpts from President Kalam’s last project, the forthcoming book Advantage India, co-authored with activist and writer Srijan Pal Singh, in which he draws upon his own life to illustrate how India can win.

In July 2014, both of us (I and Srijan Pal Singh, my co-author) visited the Jaunpur district of Uttar Pradesh to attend the National Children’s Science Congress, a platform that provides children from all over the country an opportunity to make their dreams come true using their scientific temperament. July is a hot month in this eastern Uttar Pradesh district. Coupled with dry weather and strong winds, the soil often comes loose and makes the air dusty. Such weather conditions may often last for several hours through the day and obscures one’s view.

We began our journey on the national highway. About two hours later, our convoy of five cars and a mid-sized van started moving into roads that became progressively narrower. Soon we reached an area where we were engulfed in a thick cloud of dust. Visibility was low, our only guide being the car ahead of us whose driver had thankfully switched on its tail lights to help us follow better.

I asked Srijan, “Are we on a road or have we lost our way on some kuchcha (mud) track?” He pulled out his mobile phone and switched on the GPS. To our surprise, in the midst of all the dust, the internet on the cellphone was able to function on the high-speed 3G network. On Google Maps, a moving blue dot indicated our position. All along, we were moving on a state highway—a supposed rapid movement...