Like NY, Mumbai must learn to accept the shadow of security 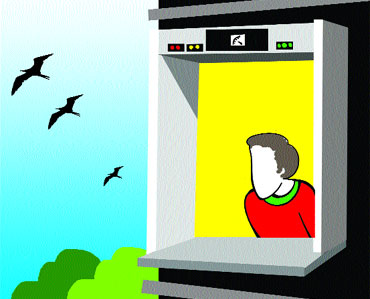 outlookindia.com
-0001-11-30T00:00:00+0553
The night terrorists attacked Mumbai, I was in a plane at New Delhi airport, on my way to New York City. The next morning, as the plane landed at JFK airport, my BlackBerry came alive with e-mails and Facebook messages from friends concerned about my well-being. I had spent much of my time in the air reading, sleeping, eating and watching movies. Suddenly, I was trying to grasp the magnitude of the attacks. My jetlagged body shook with disbelief, but I felt safe in the immigration line and later in the trains I took to reach my Queens apartment.

I was in New York City on September 11, 2001, and I remember how cable networks were reporting all sorts of rumours. They also repeatedly showed images of the twin towers of the World Trade Centre crumbling, people fleeing from clouds of dust and debris. I had always thought I was safe in New York City. But at that moment everything seemed to be collapsing.

At that time, I lived in the Lower East Side of Manhattan. Weeks after September 11, I could still smell the smoke from Ground Zero, a constant reminder of the attacks in what was nearly my backyard. New York mourned for some time, and people were afraid to be in public places, but slowly, the city came alive again.

On the morning after the Mumbai attacks, at the subway station on my way home from the airport, I saw a number of NYPD officers, some with bomb-sniffing dogs, but I paid little attention. This is New York City and in the seven years since the terrorists attacked the World Trade Centre, we have become comfortable with police presence and checks. Later that afternoon, while I was attempting to comprehend the scale of what was happening in Mumbai, I stumbled upon a little local television news item. The NYPD was reacting to an intelligence report that there was a potential threat to the city's subways and other suburban trains. These threats have become a part of our lives, and we have come to trust our governments, leaders and police.

Every new global terrorist activity creates another layer of security checks. In December 2001, Richard Reid, the shoe-bomber, was prevented by vigilant passengers from blowing up an airliner. But after that, all US airports require all travellers to take off their shoes while going through security check. It is inconvenient, but it is something I have learnt to accept. The 2005 London train bombers were carrying backpacks. And so, since that attack, the NYPD has instituted random backpack checks. And now we cannot take any liquids and creams in our carry-on bags.

In the months following the September 11 attacks, the NYPD and federal law enforcement forces beefed up security and intelligence gathering. Our rights were also compromised, and rights groups challenged the administration on that count. But phone-tapping, surveillance, and other methods may have made us safer. Then there was the ugly side of the post-September 11 events. Hate crimes increased against South Asians, Sikhs and Arabs. And the government issued directives asking male, non-US citizen residents from Muslim and Arab countries to report to immigration authorities. Thousands of people with dubious visa status ended up getting deported. And activist Mallika Dutt informs me that under the revised and far more stringent immigration laws, even legal residents and green-card holders can be deported for minor crimes.

Is New York safer than it was on September 11, 2001? I'm not sure how to answer this. But I know we have learnt to accept this as our fate—showing picture identity cards in the lobbies of every office building, while announcements in trains ask people to report suspicious packages and activities. Whatever the reasons, there has been no terrorist attack on US soil after September 11, 2001. Perhaps we got lucky. After all, terrorists have indeed struck outside the US—Bali, Madrid, London and now Mumbai.

But this much is clear. There is life after terrorist attacks. New Yorkers did bounce back—although the healing took some time. Mumbaikars will also able to stand on their feet. Time heals all. And it's important to show to terrorists that they cannot permanently break our spirits.

(Aseem Chhabra has lived in New York City for 27 years)

'The Best Way To Fight Terrorism Is To Not Be Scared'