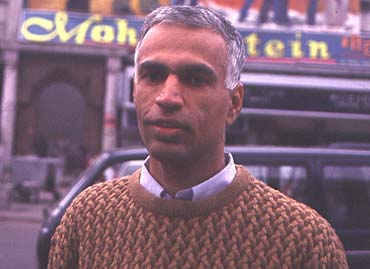 The Age Of Shiva
By Manil Suri
Bloomsbury Rs 495
If you, dear reader, abjure primetime Hindi soaps, then Manil Suri’s new novel is not for you. It will easily slide into your TV set and slump comfortably between saas and bahu before you can say didi tera devar diwana—which, incidentally, is a subplot in the novel.

The narrative opens in Meera’s drowsy voice as she feeds her baby Ashvin: "I lose myself in the rhythm of your intake. Am I imagining it, or is there a parallel rhythm that echoes inside me? A longing that rises through my body and trembles under my skin. I feel myself flush, I feel the colour spread through my chest."

Meera Sawhney, 17, is seduced by Dev Arora’s sexy voice as he croons Will you light the fire of your heart (the Manil Suri version of K.L. Saigal’s historic Deepak, Diya jalao). Dev is all the more desirable for being older sister Roopa’s lover. Meera, catapulted into marriage, is bewildered on her wedding night by clumsy Dev and lecherous Arya, her brother-in-law. The reader is bewildered too, for different reasons—bad grammar, misprints, and the writer’s persistence in using damp as a metaphor for messy sex.

Meera is fraught between the claustrophobic Arora menage and the ire of her father. Rationalist Paji loathes the thought of his daughter’s entrapment by marriage and maternity. Paji begins his machinations when Meera gets pregnant, bribes Dev with the offer of a flat in Bombay and the lure of fame as a playback singer. Outwitted, Meera gets an abortion, Dev gets his flat, and Paji gets the undying loathing of his daughter. This gets us to Part II.

And, it’s all downhill now. Dev plunges into the abyss. Meera sneers, cuts classes in college, and licks her wounds.

What’s Shiva got to do with all this? A jagged ride through Elephanta will reveal all. We get the Rough Guide version of the Shiva Purana, enough for Meera to slip Shiva snug into her burgeoning ethos of victimhood. "The chatter died down and I was left alone with the trimurti...was it trying to communicate a lesson to me? Remain unperturbed by what might be happening, it seemed to say—accept my gift of serenity."

This novel is the second in a trimurti, we’re told, and will merge contemporary India with her milieu of myth. Myths are inventions stating the unspeakable—anarchic, irreverent, subversive. Exploring myth takes both strong stomach and plucky pen. The myths of Andhakasur and Ganesh—often read as Indian versions of the Oedipus complex—are intricately ramiform, and Suri never peers beyond the surface.

The sexual confrontation between Meera and her son has potential, but writing sex is tough, and should do more than veer between coarse and coy. We sympathise with the writer, but must pity the text. Meera, "feeling a breezy sensation of bareness as (her) pubic hair was exposed", isn’t quite sure what this is all about, even with Arya looming over her. That epiphany is a page away. "As if to punctuate his last point, I felt his penis jab against my groin. So far I only had an abstract intimation of the danger.... Now, with Arya signalling the imminence of his entry, the full seriousness of my situation seized me."

Meera is quicker to concede her sexual obsession with her son. But that ease robs the text of dread. Without taboo, there is no theatre. No guilt, just guile.

A subplot fabricates a likeable trait in Meera—her resolve to protect Ashvin from the corruption of rightwing fascism. But one cosmetic measure of political correctness won’t redeem this book.

Lolita this is not, and Suri’s efforts to explain away the ugliness of child abuse through the myth of Andhakasur works for neither Ashvin nor the reader. Indian publishers, who deem novels written in India as scarcely worth the paper they’re printed on, must read The Age of Shiva. It might shame them into reconsidering the slush pile.