Legal Eagles On The Farm

For centuries, justice has eluded the poor Indian farmer. It's time to empower them. 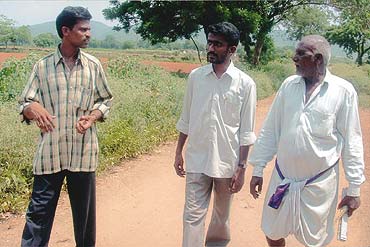 outlookindia.com
-0001-11-30T00:00:00+0553
Extending legal aid to poor villagers struggling for their rightful ownership of land comes easier than legalese to 24-year-old lawyer M. Suneel Reddy. He has chosen rural Andhra Pradesh as his area of operation. In 2000, at the end of his first year at Nalsar University of Law, Hyderabad, Suneel began exploring the idea of village courts. Says he, "The justice delivery systems in our villages like nyay panchayats have no legal sanction. Despite this, every village has one in place. I once read about a man being given the death sentence and even being administered poison by the panchayat. This cruel system set me thinking about the need to set up formal village courts."

While at Nalsar, Suneel formed a student group named Shreya which began a comparative study of panchayat and civil courts. The group went on to work in three villages of Warangal district. With the help of the MRO, MDO (mandal revenue and development officers) and the local police, they studied individual cases. "We mapped problems and held a model village court in Datla. Following that, Datla, a village with one telephone connection and no electricity, reorganised itself. Thirty years of infighting between landlords and peasants was resolved as were land disputes and criminal cases. A mandal president and sarpanch were elected," he says.

Between 2000-04, Suneel continued to visit various villages to work on development and legal awareness programmes. On graduating, he joined the Society for Elimination of Rural Poverty, run by the AP government. He, then, designed the Legal Assistance Programme for Land (LAPL) which seeks to establish a system that can help the poor fight for their property rights. LAPL enlists the participation of law students. "At any given point, there are 10,000 law students in AP. For 10 days a year, a student should work with LAPL—working in revenue courts, identifying land disputes, conducting local enquiries, assisting lawyers in filing cases and helping in organising village courts. This model is replicable anywhere in the country," says Suneel.

The lawyer’s biggest success has been the case of Manku Bai, a tribal woman in Jangaon village of Adilabad, whose family had been fighting unsuccessfully for 37 years for a piece of land against a non-tribal, B. Shanker, who claimed to have purchased it from her father Todsam Gangu in ’63. The case was referred by former Union minister Jairam Ramesh. Suneel investigated the case and found the names of Gangu and his legal heirs in the possession column of the village land records till ’80 though the alleged sale took place in ’63. There was documented evidence that Gangu was assigned the land by the government prior to ’60. The transfer of assigned land is prohibited under the Andhra Pradesh Assigned Lands (Prohibition of Transfer) Act, 1977. Hence, Suneel argued that the land be restored to the assignee. This year, orders were passed evicting B. Shanker. "This case is a landmark because it restored a tribal’s faith in the system. Just imagine, Manku Bai’s family struggled for 37 years because they were poor and had no legal support or awareness. LAPL’s sole motto is to remove these blocks," says Suneel. He has also helped a group of Lambadas and Koyas each get legal ownership of land. The case was pending since ’83.

LAPL has been working to create a cadre of para-legals. Villages are being trained in legislation affecting their areas. These para-legals work as a bridge between villagers and the civil courts. The LAPL’s work in Kadapa and Warangal has been widely appreciated by the judiciary and government. "We hope to extend our work to all 23 districts of Andhra Pradesh by this year-end," says Suneel.