A growing circle of admirers is seeing in him the first Muslim US secretary of state. Hold on, not so fast, says Zakaria. 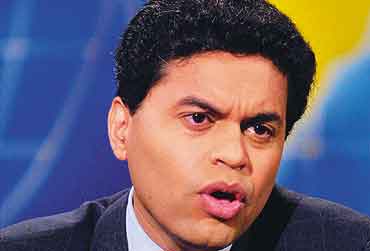 outlookindia.com
-0001-11-30T00:00:00+0553
The pedigree is impeccable, the intellect solid and the TV-friendly looks don't hurt. Celebrity journalist Tina Brown calls him New York's "hot brainiac of choice" with an "awesome ability to deconstruct global issues". Esquire calls him "one of the 21 most important people of the 21st century". Another gushing profile declares he's the Indian reincarnation of Cary Grant while painting a somewhat arrogant, to-the-manner-born picture of the man.

ABC News aggressively manoeuvres to get him as a regular on its Sunday talk show to discuss matters of state with cabinet members. An admiring circle of friends and mentors even sees him one day as the first Muslim secretary of state of the US. That would also make him the first Asian, first Indian-born, first Mumbai-educated and so on. And now with the rave attention his second book, The Future of Freedom: Illiberal Democracy at Home and Abroad, is getting, he the man should be on cloud nine.

But, hold on, says Fareed Zakaria, not so fast. This Hegel-steeped and Kierkegaard-inspired man (who looks like Omar Sharif and speaks like Rex Harrison in My Fair Lady, according to Tina Brown) doesn't like what celebrityhood is doing to him. Though, if to be on the cutting-edge of ideas at 39 is a burden, he carries it easily. With a cool confidence that's peculiarly indigenous to Americans, but can be acquired by immigrants via Harvard and Yale.

And anyway, success seemed always a given for Fareed Zakaria. He grew up in Mumbai and went to Cathedral School thinking everything was possible in a world of access and power created by his scholar-politician father Rafiq, and mother Fatma, former Sunday editor of The Times of India. He lives a similar life in NY—now starring American thinkers, presidential speechwriters and journalists invited to taste his gourmet cooking, rare wines and rarefied ideas. Gwynneth Paltrow and Oprah Winfrey buy his wife Paula Throckmorton's Mughal-inspired jewellery fashioned in Jaipur. As Newsweek International's editor, a post he galloped to from being managing editor of the prestigious policy journal Foreign Affairs, Zakaria has access with a capital A.

He became recommended reading for the Pentagon and policy wonks alike for his post-9/11 analysis of Why They Hate Us. He took a hard look at the political economy of the Arab world, the uneven distribution of the fruits of globalisation, the export of American trivia but not democratic values and went beyond the easy "they-are-evil" argument.

And The Future of Freedom, with its provocative thesis—too much democracy hampers individual liberty—has made him this season's intellectual pin-up. While his sweeping strokes have left scholars breathless, he has also captured the fickle world of American celebrity with substance, not froth. In his book, Zakaria argues that mere elections do not a democracy make. The innards—functioning courts, a free press, laws to protect individuals and economic freedom—are vital to its functioning. This, as Washington neo-conservatives undertake to home-deliver democracy to Iraq's battling Shias, Sunnis and Kurds. He'd rather they took a detour to Bihar and saw the stuffed ballot boxes before acting from their suburban homes.

In essence, Zakaria's thesis is a defence of the elite, their enlightened views and their ability to see the light. But he also wants them to deliver. "To pretend that you don't have elites only does one thing—it absolves them of any sense of responsibility, any sense of having to consciously adhere to a sense of public spiritedness," he said recently.His qualified defence of democracy can hardly endear him to the current establishment, especially at a time when promotion of free elections is US policy. "I am independent and do not accept labels.I like to think things through dispassionately issue by issue. I am more in the centre," he told Outlook from Los Angeles. But he admits he is "hawkish on foreign policy" and was a conservative at Yale and Harvard. Samuel Huntington was his thesis advisor, a connection that helped him land the Clash of Civilizations essay for Foreign Affairs. But today, he is courted by both sides of the ideological divide—the likes of Henry Kissinger, and Democratic Party bigwigs.

His book was launched at the Cosmopolitan Club—just the place for those rushing on a vertical climb—and reviewed glowingly by the likes of Niall Ferguson, another "hot" intellectual whose book Empire caused a stir for saying the Americans should take lessons from the British on how to build one. Ferguson credits Zakaria for "updating" the ideas of French liberal thinker Alexis de Tocqueville who expounded on the great revolution of American democracy but also warned against the tyranny of the majority, the voting into office of sub-standard talent and the "inherent evil" of political parties.

But Zakaria isn't advocating authoritarianism. Instead, he asks that elections be considered as one essential element, but not the only yardstick. The question is already relevant in Iraq. Should the US hold elections and accept a verdict that will likely bring in radical Shia clerics or take time to build institutions before letting seamy electoral politics take over? Zakaria says the US must first bring "order", create pillars of constitutional liberalism and then hold elections. But in terms of the American electoral cycle, we are talking Project Eternal here. Will a US president undertake retal nation-building while being dogged by provincial voters who won't support such a vast enterprise? Zakaria thinks he should and bring in other countries for international legitimacy.

In advocating an internationalist approach, he boldly veers away from the Bush boys. Zakaria's unpredictability is his greatest asset—he has lit fires under both liberals and conservatives. Some of the bricks and mortar of his thesis come from the electoral quarries of Bihar and Uttar Pradesh where he witnessed the degradation of democracy, the rule by thugs and bandits. "I have seen 450 ballot papers neatly marked for the ruling party and stuffed inside a ballot box in Bihar. There are a lot of serious problems with Indian democracy. Just happy talk about democracy is not enough. What happened in Gujarat is a stark example," he said. India was fortunate in its first decade to have serious institution-building but there has been steady erosion since. Pakistan under Nawaz Sharif and Benazir Bhutto, albeit democratic, brought back feudalism and large-scale corruption.

>But surprisingly, Pervez Musharraf gets high marks in his book. Musharraf has been able to pursue liberalisation "precisely because he did not have to run for office and cater to the interests of feudal bosses, Islamic militants, and regional chieftains.... In Pakistan, no elected politician would have acted as boldly, decisively, and effectively as he did." Quite an endorsement but those on site may disagree with Zakaria's paean to Pervez as valiant warrior against jehadis. After all, the general is only playing the age-old double game perfected by the subcontinentals. In this case: let those launching attacks against India operate freely, but take care to hand over those wanted by the fbi.

When asked about his thoughts on cooling the ever-simmering lava between India and Pakistan over Kashmir, he says the issue had become "an escape valve" for Pakistan just as Palestine is for the Arabs. "Pakistanis must recognise it's getting them nowhere. They must cut the chord if they have to succeed as a state because they can't maintain this permanent secret war." On India, the young pundit says: "India has mishandled Kashmir for many decades. What is India's solution once you get past cross-border terrorism? India can't be a democracy and not provide a political voice to the people in Kashmir."

So will he take a political job and try executing his ideas? Zakaria demurs, saying he wants to spend time with his wife and two little ones—Omar and Lila. "The hours in a government job are brutal." But watch the man.