Lara's talent is undeniable and his place among the pantheons of cricket secure, the lows notwithstanding. 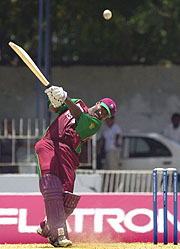 outlookindia.com
-0001-11-30T00:00:00+0553
Talk of Brian Charles Lara and the topic inevitably moves to Sachin Ramesh Tendulkar leading to a comparison between two of the most gifted cricketers of our time. Probably all times. But with hepatitis laying Lara low, the prospects of another "Lara vs. Tendulkar" show on Indian soil have been cast aside.

Even if it is difficult to talk about one without referring to the other, we shall confine ourselves, for the purpose of this piece, to Brian Lara.

Blessed with an elegance that comes almost naturally to all left-handers, Lara’s appetite for big scores is perhaps unparalleled. At a time, when cricket has become a year-long game, how many can dream of piling up world’s highest Test score and the highest first-class score at the same time. That he achieved in a period of few weeks in 1994, when he hit 375 against England and then batting for Warwickshire tore the Durham attack for 501 runs.

A short man with a slightly squat stance, Lara bats with an exaggerated backlift. And his feet move at a speed, which would do the world’s fastest sprinter proud. When in full flow, there can be few sights as exciting. He combines elegance with aggression that borders on arrogance. When he hits along the ground, especially through the covers, the fielder always gets the feeling that ball might drill a hole through his palm. All that the opposition can do is watch and admire.

Despite his small built—like Tendulkar—he has amazing power. Power, that he uses to hit the ball over the top. Add to that a pair of safe hands in the slips and you have a complete cricketer. Well, almost.

Why almost? The reason being Lara has often allowed distractions outside the field to affect his performance. His innumerable spats with the officialdom, frequent threats to quit the game and then allowing himself to be coaxed back all add to a persona that tends to be a flawed genius.

When Lara started out as a youngster, he was a heavy scorer—like that other man from Mumbai. Attached to his father Bunty, who encouraged him a lot but never lived to see him play Test cricket, Lara was almost born for cricket, and that became even better with early professional coaching.

He was brilliant as a varsity cricketer and came into first-class cricket while still a teenager. And in only his second game for Trinidad, he just missed a century against Barbados, for whom Joel Garner and Malcolm Marshall manned the attack. It was not long before Lara broke into the West Indies side in 1990-91. But his entry was rather sedate. His only Test innings on the tour to Pakistan resulted in 44 runs. On the tour to England in 1991, he failed to get into the playing eleven.

The quiet run continued into the next season or two, as Lara did make a half century here and there and then in the 1992 World Cup. But he really exploded, when the West Indies went Down Under in 1992-93 tour. West Indies won the series 2-1 and Lara had become a superstar. He made two half centuries in the first two matches, then came his first Test century, 277, in the drawn Sydney Test. And in the limited-overs version, he knocked in three hundred in five visits to the crease.

But when England came to West Indies in 1994, he soared. That Sydney innings was a mere preview to what the main show was to bring. He followed up his first Test knock of 83 with 167 in the third.

Then in front of the Antiguan crowd and on a flat track, he displayed unmatched composure and concentration to pile an incredible innings. He went past 300 and then in the presence of legendary Garfield Sobers, he passed his record of 365 with a glorious pull shot through the square leg and ended the innings at 375, the highest Test score ever.

His recent batting exploits earned him a lucrative contract from the English county, Warwickshire, for whom he made centuries with unimaginable ease. And then he peaked with a stunning 501 against Durham, which put into shade the 499 by Hanif Mohammed of Pakistan. Thereafter, Lara made England bowlers his favourite victims and they once again suffered when he played in England in 1996.

To his Test exploits he added more in the shorter version at the 1996 World Cup.

Then came captaincy, a job he seemed to have been groomed for since his youth—remember he was the Trinidad skipper at 20. His first series was successful, winning 3-1 against England in 1998.

But then came the crisis. The team started failing and his commitment to cricket started being questioned. There was more focus on flamboyant lifestyle, his girlfriends and his habit of arriving with head-turning beauties. His personal life became a bigger topic for discussion as his bat failed to do his bidding.

The series against South Africa was a disaster as West Indies lost 5-0. Lara did have moments of personal brilliance, but they were all washed aside in the wake of his team’s failure. Lara delved into his reserves when Australia came and he attempted to rescue the series. He hit a double century in Jamaica, and an unbeaten 153 in Barbados as West Indies won the Test by one wicket. In the final Test, which was again lost, he hit a fast century, but there was little in the team except Lara.

More failures in terms of lost series followed. They lost all seven odis in New Zealand and Lara quit the captaincy. A poor World Cup in England in 1999 compounded problems and he spoke of a break from cricket. He missed the series against Zimbabwe and Pakistan, but did tour England under Jimmy Adams. The tour was a complete disappointment by his own lofty standards.

But Lara came back with a vengeance when the team toured Sri Lanka in 2001. It was reported that his idol, Gary Sobers, had a chat with him. That put him back on track and he slaughtered the Sri Lankan attack. But that same Lankan attack had the rest of the West Indies line-up on the run. Lara’s three centuries—178, 221 and 130—were almost half of what his team scored. And then an injury, a result of a collision with Marvan Attapattu, ended his tour. The broken elbow also saw him miss West Indies matches with Pakistan.

He came back in time for India’s visit to West Indies and the tour was billed as "Lara vs. Tendulkar" but it was not quite like that. Still he had a decent enough series.

Lara was among those expected to shine at the recent icc Champions Trophy in Sri Lanka, and indeed he looked quite on way to doing that with his 15th century in odis against Kenya. But hepatitis struck him. And there ended the possibility of another "Lara vs. Tendulkar" in India.

Yes, Lara’s talent is undeniable and his place among the pantheons of cricket secure, the lows notwithstanding.

(V. Krishnaswamy is a sports consultant-cum-commentator)