We are approaching the last league game as the fourth final. We'll go the whole hog. 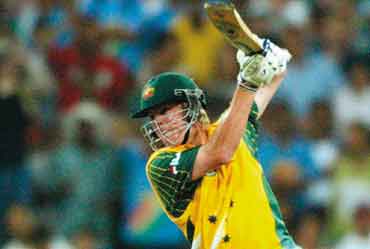 outlookindia.com
-0001-11-30T00:00:00+0553
The Melbourne game against Zimbabwe was the last opportunity we had to rest a few tired limbs in the side. We went in without Adam Gilchrist, Andrew Symonds and Jason Gillespie, but on Sunday, it will be the best available eleven that will take the field at the WACA in Perth. I am sure India too will play their best possible side on Sunday, and there is a good chance that we will see Sachin Tendulkar and Virender Sehwag at the top of the order. It will be interesting to see how this in-form Indian batting takes on Brett Lee, Brad Williams and Jason Gillespie on the WACA wicket, which traditionally assists bowlers. The track has slowed down a little, but since this will be a day game, there will be some assistance for the bowlers at the start of the game.

We landed a psychological blow against India with Brett Lee's last-over six at Sydney, so we must look to keep the mental edge intact going into the finals. The Sydney game was a tough one, with India dominating us for a large percentage of the time. However, if there was one guy I would have picked in that situation in the last over, it would have been Brett. He has hit quite a few last-over sixes in limited overs cricket, and it was amazing to see him do that in such a pressure-cooker situation. Back in the dressing room, I was already doing a post mortem of the game in my mind, since I felt it had really slipped away because of some crucial mistakes we made in the last 10 overs. I was only hoping Brett could pull off a magic shot, when he did just that. Things might have been different if it was a full-length game. We might not have gotten away with losing wickets regularly, but finally it's the result that counts and we added to our wins in the tri-series.

While we did win the game, I was not too happy with our patchy performance that day. Shortly after the game, we had a meeting in which we decided to use the last three matches of the tri-series to iron out some of the rough patches in our game. As far as our batting is concerned, most of the guys have had at least one good knock in the series, with the exception of Damien Martyn. I took time in the flight from Adelaide to Melbourne to have a quiet word with Martyn. I thought it was important for him to know that both the team management and the selectors have great faith in him, and that they wanted him to come good. He has been in real good nick at the nets but is getting out very early every time he goes out to bat. We all know that he is a class player, so I plan to give him plenty of time in the next two games so that he regains form and confidence when the finals come along. Damien is a hard-working guy, who is open to suggestions and help from everyone around him. His attitude and talent will ensure that he will come good in the next couple of games itself.

The other area we need to concentrate on is building partnerships while batting and bowling well in tandem. Right through this series, we have failed to build substantial partnerships, particularly against India. While bowling, the inability to build and sustain pressure from both sides has allowed the likes of Laxman and Yuvraj to make merry. The fielding has improved in the last couple of games, but in my opinion, we still can convert more half-chances.

I don't think we have played our best cricket yet. There have been some glimpses of brilliance, but they have been interspersed with some pretty ordinary play as well. As a side, we have always prided ourselves in our ability to maintain high standards over long periods of time. This has not happened in the tri-series, so we now need to focus on doing well in the games that matter most—the finals.

The team is approaching the last league game almost like a fourth final. We know that quite a few Indians have taken a liking to our bowling, so we need to try out some different tactics.V.V.S. Laxman has been the biggest thorn in our flesh and he has already done enough to be remembered in this country for many years to come. His form has been absolutely unreal, and you would have to hope or believe that he will finally hit a bad patch. It would be great if that happened around the finals, but since we can't depend on prayers alone, we need to plan and try to get him out.

England captain Michael Vaughan was also pretty special in the Ashes series last year, but he was not as consistent in the VB Series, and even in the Tests he did not get the support that was needed to make his knocks match-winning or even match-saving ones. If one player has stood out right through this series and tour, it has been V.V.S. Laxman, and it will remain that way even if he does not score a run from here on. The other salient feature in this Indian side is that they have finally developed bench strength. Any bloke coming in from the reserves is grabbing his chance with both hands to acquit himself well.

I did not see much of Rohan Gavaskar the batsman in the games he played against us, because he came in with a few balls left on both occasions. However, he seems to be a good fielder and a useful bowler as well. Irfan Pathan has come along nicely, and now seems to be preferred over Ashish Nehra. Balaji also has had some success against us, but it remains to be seen in Perth whether the scars of the last-over six remain with him. Similarly, I hope the confidence of having won a game for his side, albeit with the bat, will help Brett bowl with more confidence in the remaining matches. Very often one aspect of the sport helps a cricketer improve another dimension of his game. Brett is a positive guy, so I hope he does the same as well.

Besides cricket, I was pretty impressed with the way Rahul Dravid conducted himself during the ball-tampering issue. It was a pretty bizarre thing to happen, and I have not seen the footage in question. While jelly can make the ball look shiny, it must be a heck of a bother to grip a ball that has some sticky substance on it. Fortunately, both Clive Lloyd and Rahul dealt with the issue with discretion and dignity.