Lechery In The Time Of Gout: A Domestic Idyll 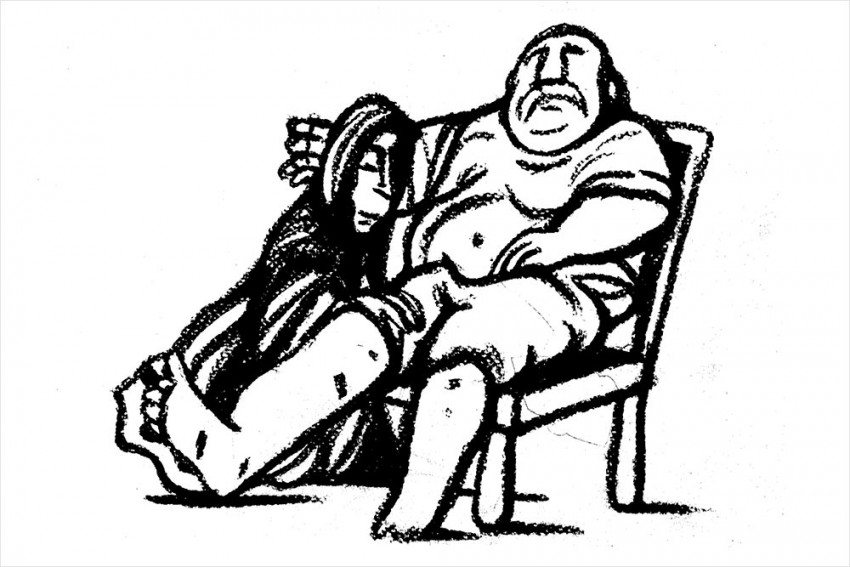 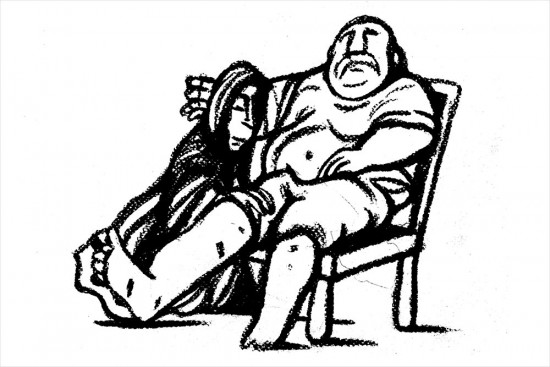 As the years passed Mange Ram’s body became a large and lumpy mockery of what it had once been and his reputation as a lecher grew. His digestion worsened, his liver grew wea­ker and his knees began to give way. Eventually Lala Motichand decided that the obese libertine whose liver was keeping him in bed for longer and longer stretches of time, was a liability, and suggested to him that he should go back to his village and send a son to Delhi in his place. Having no option but to accept this suggestion Mange Ram returned home almost three decades after he had left it, his reputation as a champion wrestler of yore still alive in the winding conversations that took place amongst reti­rees every day in the village chaupal, conversations that ended with someone saying, ‘And look at him now, so fat he can’t get off his charpai to go to the fields in the morning.’

So it was that Omvati, Mange Ram’s younger son Parsadi’s wife, arrived as a teenaged bride in her husband’s village to find that her husband was to leave for Delhi ten days after they were wed and although she had no mother-in-law to contend with, Parsadi’s mother having quietly passed away some time before Mange Ram’s superannuation, she did have a largely bedridden father-in-law whose care was immediately assigned to her by her elder sister-in-law, Radharani. Serving her in-laws, Omvati had been told, was her duty as a wife and, distressed though she was at having been more or less abandoned by her husband within days of being wed, she warmed to the task of looking after her father-in-law uncomplainingly, taking care of Mange Ram’s meals, helping him to the bathroom, organising and administering the various mixtures and potions the village doctor prescribed.

Mange Ram was a most grateful patient, always praising her dedication, occasionally lacing that praise with implicit and explicit criticism of Radharani’s cooking, her way of speaking, her laughing and talking with young men around the village, in an attempt to win over his younger daughter-in-law by playing on her sense of rivalry with her elder sister-in-law. This rivalry barely existed in fact but its eventual flowering appeared to be an inevitability for Mange Ram, who had survived, flourished actually, for years in a large, wealthy household that had, nonetheless, rid itself of him once his utility was over.

Then one evening while leaning over Mange Ram to settle his bedclothes, Omvati felt something on her breast. Confused, she tried to flick off the creature that she thought had jumped on to her, only to find that it was her father-in-law’s hand. ‘Babuji! What are you doing?’

Confused, she tried to flick off the creature that she thought had jumped on to her, only to find that it was her father-in-law’s hand.

But the accidents kept repeating and Omvati began to realise the full import of the insinuations that Radharani sometimes made about the old man. He must have done something similar with her, she realised, and this filled her with both a sense of greater connection with the older woman, who had always been kind to her without being overly friendly, and also anger that Radharani had thrown her into this situation without explicitly warning her about it. Finally, one morning when she was sitting in the yard cleaning the rice with her sister-in-law, Omvati drummed up the courage to say something. ‘Babuji’s hands wander sometimes,’ she said.

Radharani looked up from her task. ‘What did you say?’ she asked.

‘Babuji’s hands wander sometimes,’ repeated Radharani. ‘Is that what you said?’

‘What do you do then?’ Radharani asked.

‘I just remove them,’ said Omvati.

‘I did,’ said Omvati. ‘He always says it was an accident.’

‘That’s good,’ said Radharani. ‘You did the right thing.’

‘Let people who are wiser than you decide what is right and what is wrong,’ Radharani said, firmly but not unkindly. ‘Don’t forget that we eat because that man worked as another man’s servant all his life.’

‘Oh, I see,’ said Radharani, her tone growing harsh. ‘You think now that your husband has taken his father’s place you will rule this house. Don’t forget the land that Lala Motichand gave your father-in-law, the land for which he begged and wheedled for so many years, is tilled by my husband while your husband enjoys the comforts of Delhi.’

‘Didi, I didn’t mean it that way,’ said Omvati. 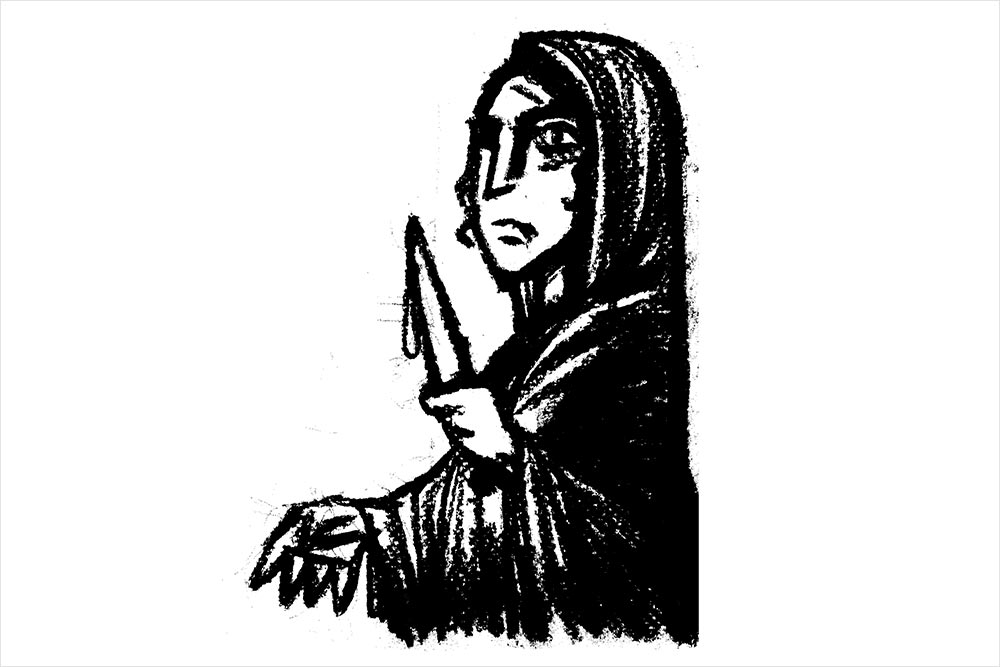 ‘Look,’ said Radharani, her voice softening again. ‘I already told you that you did the right thing by removing his hand. What you are doing wrong is talking about it now. Leave it, let it go. How long does that man have in this world anyway? He goes today, he goes tomorrow. Till then, just keep your mouth shut.’

The next day Omvati took out a coin from her box and went to the post office. But when the writer asked her what she wanted to write in the letter to her husband, she realised that she could not say what she wanted to say in front of this man. So she took her money back and went home.

The occasional accidents turned quotidian. Mange Ram began to ask Omvati to massage his legs, each time urging her to massage a little further up his thighs, sometimes leaving his dhoti carelessly undone so that she could see his genitals, wrinkled but noticeably tumescent. Every time her hands moved up he would encourage her: ‘Very good, bahu, live long, be fortunate.’ The unmistakable aura of lust in his voice transformed the traditional blessing, making Omvati’s flesh crawl. The sight of his large, flabby thighs, flesh falling over to the sides when he lay flat, his large, distended stomach folding over his dhoti, disgusted Omvati, sometimes almost made her retch. But somehow she went through the ordeal day after day.

Then one evening when Mange Ram took hold of a nipple through her blouse, Omvati felt something that she had not felt in all these days. The sensation swept through her body, running through her mind in a coruscating sweep that left her quivering. She felt arousal. For a moment she was still and Mange Ram, experienced hand that he was, knew instantly that he had her. With an effort he lifted his other hand and grabbed her other breast. ‘Come, bahu,’ he said. ‘Come to me.’

Omvati pulled away from the old man’s grasp.

‘What happened, bahu?’ he asked, his rheumy eyes gleaming at the prospect of imminent victory.

Omvati turned and walked out of the room. She went to the kitchen, picked out the sharpest knife she could find and came back into Mange Ram’s room. Before he could realise what was happening she had planted the knife on his stomach and with a quick move made a cut on it about two inches long.

Omvati put one hand over his mouth, pushing his jaw up so that he could not bite her. ‘It was an accident, babuji,’ she said. ‘Forgive me.’

By the time Radharani and her husband came to see what had happened, Omvati had staunched the flow of blood and was bandaging the cut.

The next day Parsadi’s brother wrote to Parsadi saying that it was not right to leave a new bride alone for so long, that he should get a few days’ leave as soon as possible and come and take her with him.